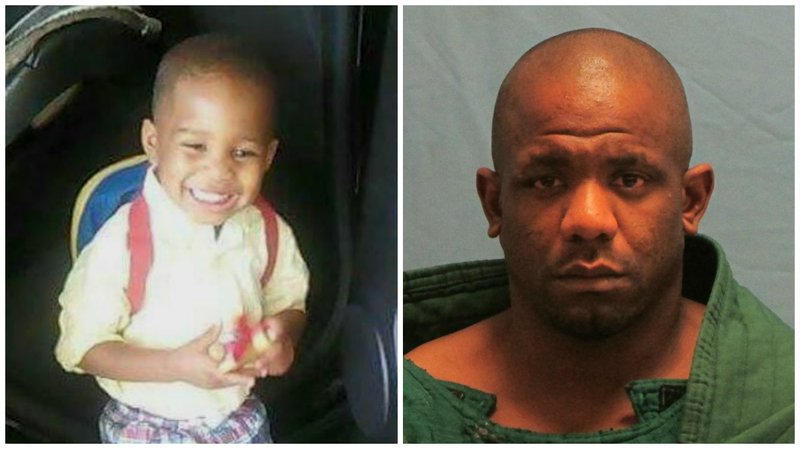 Gary Holmes Sr., 34, (right) faces one count of capital murder and two counts of committing a terrorist act in the death of 3-year-old Acen King (left) in Little Rock on Saturday, Dec. 17, 2016.

After finding Gary Holmes guilty in the killing of 3-year-old Acen King, jurors sentenced him to 50 years in prison.

Before the sentence was determined, Acen’s mother, Gashon Bell, read aloud a statement to the court, describing the moment she first saw her son after his death and the emotional pain she has endured since.

“As bad as I want to hate you ... I just can’t,” she said, calling the killing a “lifetime thing to deal with.”

Bell noted that after Acen’s killing, she had “spiritual talks” with her son that eventually allowed her to forgive Holmes.

Acen’s grandmother, Kim Macon, also took the stand, describing Acen’s personality and the lasting effect her grandson’s death has had on her family.

“He was just different. We miss a lot of that about him,” Macon said.

The last person to testify was Holmes’ mother, Sandy Milton, who described her son's troubled past.

“My son has been through a lot,” she said, referencing vehicle-related injuries he suffered as a young child and battles with depression.

“I don’t think he was in his right mind [at the time of the shooting],” Milton added.

Holmes is not eligible for parole during his prison term.

A jury has found a Little Rock man guilty of first-degree murder and terroristic threatening in the 2016 killing of a 3-year-old toddler.

The jury in Pulaski County Circuit Court returned the verdicts after less than 30 minutes of deliberations.

Acen Ahmeer King was fatally hurt when Holmes fired a single gunshot from a Dodge Charger at the intersection of Mabelvale Cutoff and Warren Street into the back of his grandmother’s car Dec. 17, 2016.

King’s grandmother didn’t realize the toddler had been hit until arriving at the Shackleford Crossing shopping center in west Little Rock.

Jurors have begun deliberating the case of Gary Holmes, who is accused of first-degree murder in the 2016 killing a 3-year-old toddler in Little Rock.

King, 34, also faces one count of committing a terroristic act.

Police say 3-year-old Acen Ahmeer King was fatally hurt when Holmes fired a single gunshot into the back of the toddler's grandmother’s car on Dec. 17, 2016 at Mabelvale Cutoff and Warren Street.

King’s grandmother didn’t realize the boy had been hit until arriving at the Shackleford Crossing shopping center in west Little Rock.

Holmes’ attorney, Ron Davis argued that the state had incorrectly charged his client in the case, making it impossible for jurors to convict him of the crimes in which he is charged.

“There is much ado, much to be made of the language [of the law],” Davis said, adding that Holmes had only intended to hit the vehicle in which King was struck.

The lawyer, who at times raised his voice in court, also criticized the judge in his handling of the case.

Prosecutor John Johnson, meanwhile, contended that Holmes had only presented “excuses” — including that Holmes was unaware that the gun was loaded and only intended to hit the vehicle.

The prosecutor said Holmes should be held responsible for King’s death because “common sense” tells that the gunshot would have traveled further than just the vehicle, ultimately ending the toddler’s life.

Check back for updates and read Thursday’s Arkansas Democrat-Gazette for more details.

John Lynch contributed to this story.