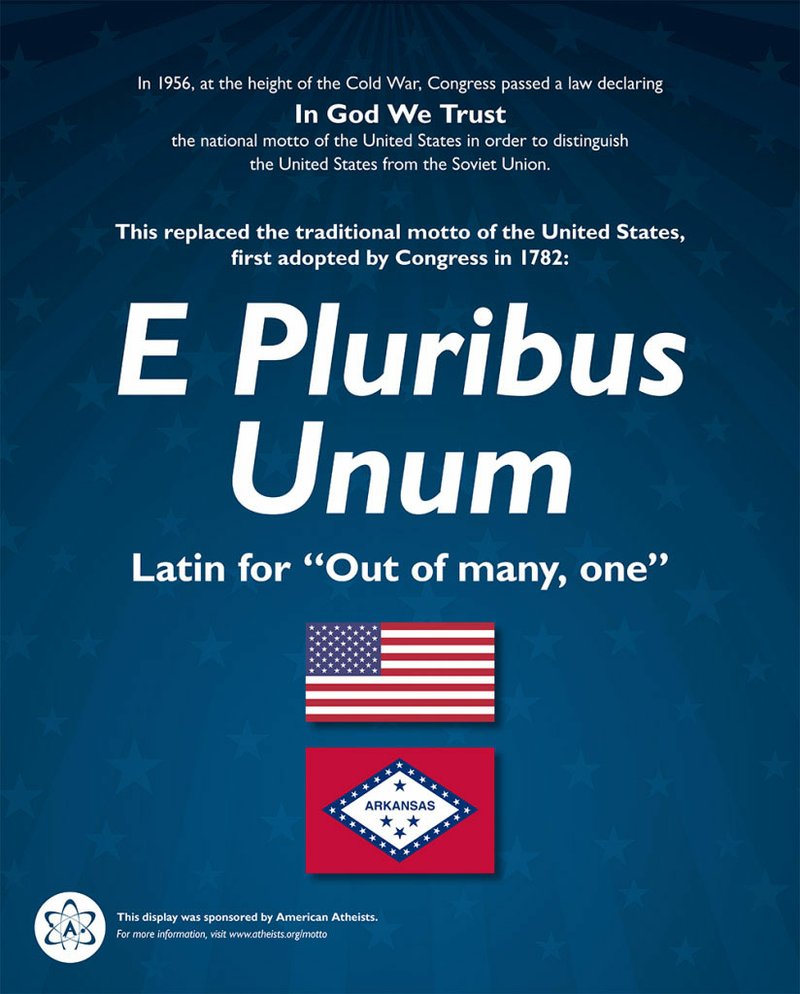 This is the "E Pluribus Unum" poster American Atheists, an organization dedicated to the separation of church and state, asked to hang in Bentonville School District classrooms and buildings.

BENTONVILLE -- Thanks, but no thanks.

That's the gist of the Bentonville School District's reaction to a pledge by an atheist organization to donate hundreds of national-motto posters for display in the district's classrooms.

It would be the second donation of its kind the district has received that is related to a state law passed last year.

The district in March received nearly 900 posters with the motto "In God we trust" as well as the U.S. and Arkansas flags. The posters, donated by the Arkansas-based American History and Heritage Foundation, hang in the classrooms and libraries of Bentonville's schools. No public money paid for those posters.

Act 911 of last year's legislative session requires the state's public schools and other state agencies to display durable posters featuring the motto, as well as the U.S. and Arkansas flags, if the posters are donated.

Representatives of American Atheists, a New Jersey organization dedicated to the separation of church and state, appeared at Monday's School Board meeting and explained that their posters meet the law's requirements but provide additional background on the motto.

"This replaced the traditional motto of the United States, first adopted by Congress in 1782: E Pluribus Unum -- Latin for 'out of many, one.'"

"E Pluribus Unum" is printed in a much larger font than the rest of the words and is at the center of the poster.

Leslee Wright, the district's communications director, said the district has no plans to hang additional posters in the schools.

"Our schools should not serve as the backdrop for political agendas, regardless of the viewpoint," Wright said in a statement. "Our focus is student education, creativity and growth. Discussions such as this one should be reserved for the appropriate setting."

Nick Fish, national program director for American Atheists, told the board his organization believes students "deserve all the facts, not just a poster of an exclusionary, divisive motto devoid of any additional context or information."

Rep. Jim Dotson, R-Bentonville, sponsored the bill that became Act 911. Only three lawmakers voted against it. Fish said his organization chose to make its presentation to the Bentonville board because it's Dotson's home and because of the community's diversity.

Act 911 does not specify any circumstances under which state agencies may reject donations of "In God we trust" posters, assuming the posters meet the guidelines outlined in the law.

Dotson said he doesn't believe the American Atheists' posters should be hung in classrooms because they include, in the bottom left corner, a reference to the organization, including its logo and a website address for those interested in learning more about the motto: www.atheists.org/motto.

"If it has anything on there referencing an atheist organization, then it would probably violate the First Amendment establishment of religion clause," Dotson said. "So it would be unconstitutional to hang them up."

American Atheists paid for its posters and has up to 1,000 ready to be given to Bentonville. The posters are available to any other school district that wants them as well, Fish said.

As for how the organization will respond if the district refuses to hang the "E pluribus unum" posters, Fish said American Atheists will have to "look closely" at that. The district hasn't officially responded to the organization's donation, he said.

"We're sending a certified letter to the district with a request for a response," Fish said. "I also delivered the letter in person. They haven't officially provided us a response yet, so I don't want to get into what will or won't happen."

Wright said the district hasn't received any such letter from American Atheists.

Fish also noted the "In God we trust" posters donated by the American History and Heritage Foundation did not meet the law's requirements because the U.S. flag in the poster was not centered under the motto.

Dotson said the foundation has printed replacement posters fixing that error. They will be delivered to Bentonville schools this week, he said.

Dotson has served as representative of state House District 93 since 2013. He is running for re-election this year against Democrat Gayatri Agnew.

When reached for comment Wednesday, Agnew said she is far more concerned about the state's mechanism of paying for education than she is about signs on the walls.

While she believes in God and in sharing the history of U.S. mottos, she said she also believes the Legislature must prioritize making certain schools have what they need to operate well, she said.

"I'm not sure the legislation Rep. Dotson championed is the highest and best use of legislative time and energy," Agnew said.

Arkansas’ Act 911 of 2017 requires public schools and other state agencies to hang “In God we trust” posters if the posters are donated. Other states have adopted laws this year related to the national motto.

Florida and Tennessee both passed laws requiring “In God we trust” signs be prominently displayed in every public school in the state.

Alabama passed a law this year that gives public bodies the right to display the “In God we trust” motto. It is not a mandate.