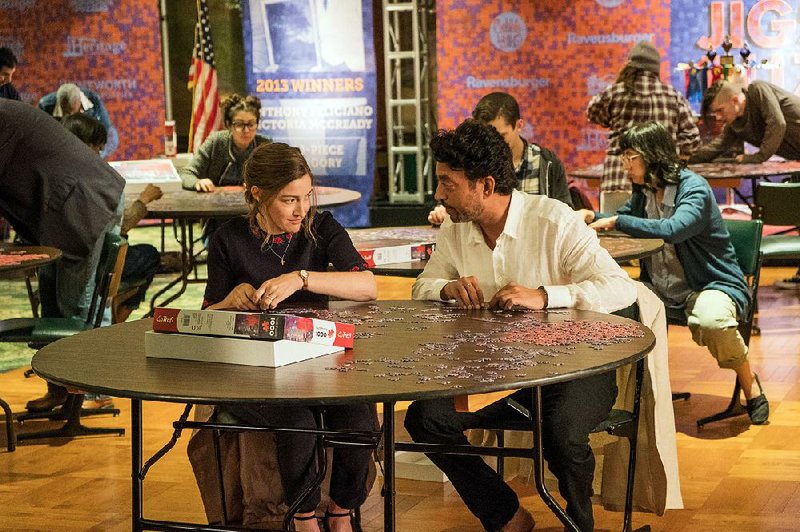 Agnes (Kelly Macdonald) and Robert (Irrfan Khan) discover things about themselves and each other when they become competitive puzzle working teammates in Marc Turtletaub’s gentle domestic drama Puzzle.

Modesty is rarely seen as a virtue in Hollywood.

In fact, there's a species of moviegoer who doesn't even recognize human-scale drama as a fit subject for cinematization. If it's not loud and larger than life, why bother projecting it on a wall?

But we ought to appreciate stories like these. Puzzle plays more like an anecdote passed on by a friend about interesting people than a myth or legend. There is sadness in it, but not tragedy, and uplift, but not exactly triumph. Some people will find it underwhelming. But it is tender and humane and offers a couple of fine, quiet performances.

Let's start with Kelly Macdonald, a Scottish actress who first drew notice in Danny Boyle's Trainspotting in 1996. Though you might not recognize the name, you'll probably know her face -- she has worked steadily, often showing up in small but important roles such as Josh Brolin's character's faithful (and doomed) wife in No Country for Old Men, one of the more interesting characters in HBO's Boardwalk Empire, and one of the Harry Potter films.

Puzzle puts her front and center as Agnes, a Connecticut woman married to Louie (David Denman), an affable but unimaginative auto mechanic who doesn't realize he's as trapped in the domestic arrangement as the bored and frustrated Agnes is. ("Every day the same thing.") One of the neat tricks the movie pulls off is that while we understand that this is a bad match and that Agnes needs more intellectual stimulation and adventure than complacent Louie knows how to provide, he never comes off as a bad guy. He just believes marriage is the sort of partnership his parents had -- Agnes' dreaminess is simply beyond his ken. It's clear he loves her. It's also clear that the couple doesn't have much in common and that Agnes has been sublimating her true self in order to appear to be a good wife.

In the opening scenes she silently performs household ablutions, preparing for a party as light slants through the lace curtains of her little house. There is an anachronistic feel; we can't quite place Agnes in past or present until we realize the party she's preparing for celebrates her own birthday. She opens a small box and regards the iPhone inside with indifference. She can't imagine a use for it.

But she is much taken with another gift, a 1,000-piece jigsaw puzzle, which she unwraps the next day and completes in a couple of hours. Agnes figures this is how puzzles work, that they offer about a movie's worth of diversion. But she enjoys the experience enough that she decides to venture into Manhattan to visit a specialty shop and pick up a couple more. There she sees an ad posted by a man looking for a partner to work puzzles in competition.

Although she has probably never imagined the existence of such a world, she's soon meeting with Robert (Indian actor Irrfan Khan), a depressed, recently divorced man whose inventions have allowed him an early retirement. He shambles around his luxe (but conspicuously underfurnished) apartment and fetches a puzzle from one of hundreds he has on his shelves. He soon determines that Agnes has a rare gift for the work.

Robert is exotic and worldly; we sense that Agnes hasn't related to a person of color before. He discomfits her with his vaguely louche mien, and when he has the audacity to answer the door in his bathrobe, she abruptly cuts the practice session short.

And we understand why Louie is befuddled by his wife's sneaking off to New York twice a week.

Puzzle is a remake of a 2010 Argentine film by Natalia Smirnoff, and without seeing that film it's impossible to know exactly how much credit to give screenwriters Polly Mann and Oren Moverman for its gentle tone . Director Marc Turtletaub (Little Miss Sunshine) might lay on the lady-out-of-time shtick a bit too heavily, for Agnes seems more a creature of the '50s, but the ultimate result is a well-observed portrait of a thoroughly modern woman coming to grips with long suppressed dissatisfactions and discovering in herself a fresh and frightening capacity for growth.