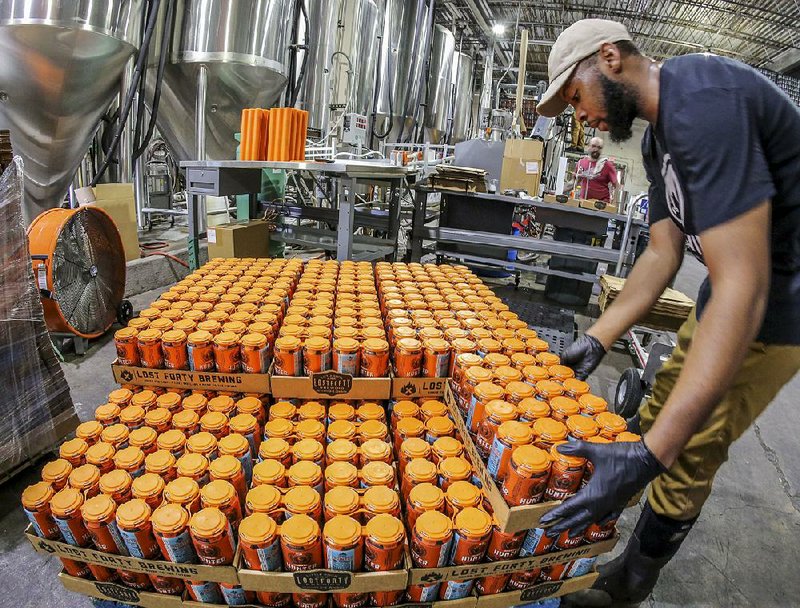 Lost Forty employee L.D. Moore stacks cases at the brewery earlier this month. The Little Rock-based brewer produced the equivalent of 12,075 barrels of beer in 2017, nearly a third of the state’s total beer production.

Arkansas breweries produced more than 1.2 million gallons of beer in 2017, a better than 35 percent increase over 2016, according to data from the state's Alcoholic Beverage Control Division.

The state's top three breweries kept the same rankings as 2016.

Little Rock-based Lost Forty Brewery, working under a microbrewery restaurant permit, kept the top spot for beer production for the second year running, making 12,075 barrels of beer, nearly a third of the state's total beer produced in 2017. Lost Forty's production was up nearly 30 percent from the year earlier. Core Brewing Co. in Springdale held on to its second-place spot with 4,409 barrels, up 4 percent from 2016. Rogers-based Ozark Beer Co. kept its third-place spot with 3,918 barrels, up 29 percent from 2016. Both Core and Ozark beer report their production under small-brewery permits.

Lost Forty owner John Beachboard said the brewery will continue to increase production in 2018 but not to the level seen in recent years. He projects a 10 percent to 20 percent increase for 2018 with the brewery concentrating on adding new beers to the company's offerings.

He added the brewery plans to maintain its strategy of distributing its beer only in Arkansas. He said limiting distribution to inside the state helps ensure quality and freshness, two aspects he attributed to Lost Forty's ongoing success.

Julia Herz, craft beer program director with the Brewers Association, said newer craft breweries are responsible for most of the recent production growth nationwide. She noted production at breweries founded from 2014 through 2017 represented 52.6 percent of production gains in 2017.

She said Arkansas production numbers indicated the state's brewers have a lot of room to grow.

In early 2018, Lost 40 Brewing added capacity to produce more beer and in May, the company won two bronze medals at the World Beer Cup competition in Nashville, Tenn.

In April, Fayetteville-based Fossil Cove said it is leasing space just around the corner from its taproom and brewery and plans to use the new location to produce more beer. In 2017, Fossil Cove made 1,384 barrels of beer, down slightly from 1,403 in 2016.

Last month, Core signed a distribution deal with Dallas-based Glazer's Beer and Beverage. Prior to the deal, Core distributed its own beer in Arkansas and parts of Oklahoma and southwest Missouri. In addition to its sale of beer in cans and kegs, Core operates nine Core Public Houses throughout the state. 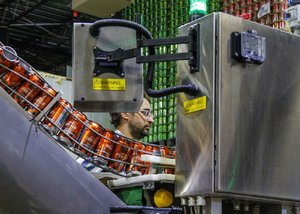 Photo by John Sykes Jr.
Lost Forty production manager Dylan Yelenich keeps an eye on cans of beer flowing off the line at the Little Rock brewery earlier this month.