Hogs to go all white for opener 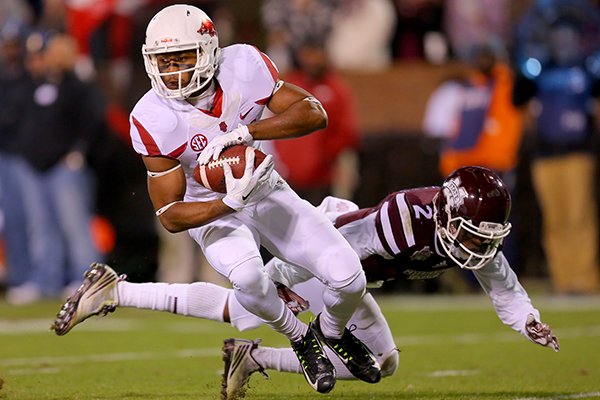 Arkansas receiver Jared Cornelius breaks a tackle by Mississippi State State's Will Redmond during a game Saturday, Nov. 1, 2014, in Starkville, Miss. The Razorbacks will wear all-white uniforms Saturday for the first time at home and for the first time since the 2014 season. ( Stephen B. Thornton)

The combination is believed to be the first time the Razorbacks have worn all white for a home game. Arkansas last wore white helmets and white jerseys in a 17-10 loss at No. 1 Mississippi State in 2014.

"Yeah, we're excited about that," Morris said. "It's something we talked about [as far as] what can we do? It'll be a great way to start this season off.

"We kind of broke it out in the beanie bowl and let the guys wear them. So yeah, it'll be fun to run out of the A with these guys."

Morris said the football program had to notify the staff at Eastern Illinois by June 1 about not wearing traditional dark jerseys for a home game, as per NCAA guidelines.

The Razorbacks are believed to have worn white helmets in eight games, including a home loss to Rutgers in 2012.

Reserve defensive end Jamario Bell came up limping after the early move-the-ball portion of Wednesday's practice and immediately went over for an examination of his right ankle or foot by head athletic trainer Dave Polanski.

After Polanski made an initial examination, Bell limped into the Walker Pavilion and toward the locker room with a member of the training staff.

Meanwhile, starting defensive end Randy Ramsey did not participate in Wednesday's practice and had a wrap on his right knee. The senior stood to the side during drills and reiterated teaching points to Gabe Richardson, Dorian Gerald and others at the position.

If Bell and Ramsey are unavailable Saturday, Richardson and Michael Taylor would be the likely starters, with Gerald leading the pack of reserves.

Asked what kind of roles the two tight ends and defensive end Randy Ramsey might have in the opener, Chad Morris said, "A lot will depend on how today goes and tomorrow. They worked out yesterday, and they're getting better every day. We'll wait and see as it gets closer to the game on that."

Morris said he would drop down to four game captains next week, and mostly seniors will serve in that capacity. Permanent captains for 2018 will be voted on later in the season.

Jack Crowe, the former Arkansas head coach and offensive coordinator, said the Razorbacks have been mired in mediocrity, but will break out of that mode under Chad Morris.

"I didn't know on the inside, but I knew how they were recruiting and the people from the outside, how they perceived playing Arkansas," said Crowe, who lives in Birmingham, Ala., and was a longtime Auburn and Clemson assistant. "The perception was they were mediocre and that perception was reality."

The Razorbacks opened 2012 against Crowe's Jacksonville (Ala.) State team from the Ohio Valley Conference and won 49-24.

"When people walked up to me and talked about football, Arkansas always came up and everybody thought they were mediocre," Crowe said. "They felt like they were no threat to them. That ain't good."

Without mentioning Jeff Long, the former Arkansas athletic director who is now at Kansas, Crowe referenced Long's decision to hire Bielema from Wisconsin.

"This is my one statement about what hiring [at Arkansas] has looked like from my perspective," Crowe said. "The minute you got so much money in college football programs -- gobs of money -- you started having athletic directors that sort of acted like accountants. And when they went to hire a head football coach, they were trying to win the press conference.

"Bret Bielema won the press conference, and I'm not going to take shots at Bret. I think he's a great football coach. But it was not a good fit."

Crowe indicated Bielema struggled to recruit at the necessary level to compete in the SEC.

"What anybody ought to know is that the athletic director needs to hire somebody that can win the living room," Crowe said. "Every momma knows when somebody walks in there that fits their culture."

"SEC money, which is the reason Frank made the move because it gave long-term security to the program," Crowe said, referring to Frank Broyles, the longtime athletic director who engineered Arkansas' move from the Southwest Conference to the SEC. "That's a lot of television money. But you better spend it wisely, and buying out coaching contracts isn't a very good use of money."

Chad Morris said he had a game plan in mind for when Ty Storey would get his first series at quarterback in relief of starter Cole Kelley on Saturday, but he didn't reveal the plan Wednesday.

"We'll make sure they're ready to go with it," Morris said. "Cole is gonna start, and Ty is gonna play. He's gonna play early. They're gonna have their opportunities to move that team down the field and get the ball in the end zone.

"When that's over with, we'll evaluate things and go to the next one."

Connor Limpert connected on a 37-yard field during the early portion of practice Wednesday. The kick sailed down the middle with plenty of leg.

Eastern Illinois senior receiver Alexander Hollins, 6-1 and 170 pounds, is a preseason All-OVC pick. He had 47 catches for 694 yards and 7 touchdowns last season.

"He won a couple games for us last year just making big plays," Panthers Coach Kim Dameron said. "He's not the biggest guy in the world, but he can run, and he's really good on the 50-50 balls.

"He does a good job of going up and attacking the ball at the high point. Plus, he's a great kid and a good student. We're looking for him to have a big year."

"I think No. 15 [Hollins] and No. 7 [Gooch], they've got pretty nice top-end speed," Pulley said. "They're pretty decent guys at the receiver position."

Print Headline: Hogs to go all white for opener