Arkansas Senate gets organized for session 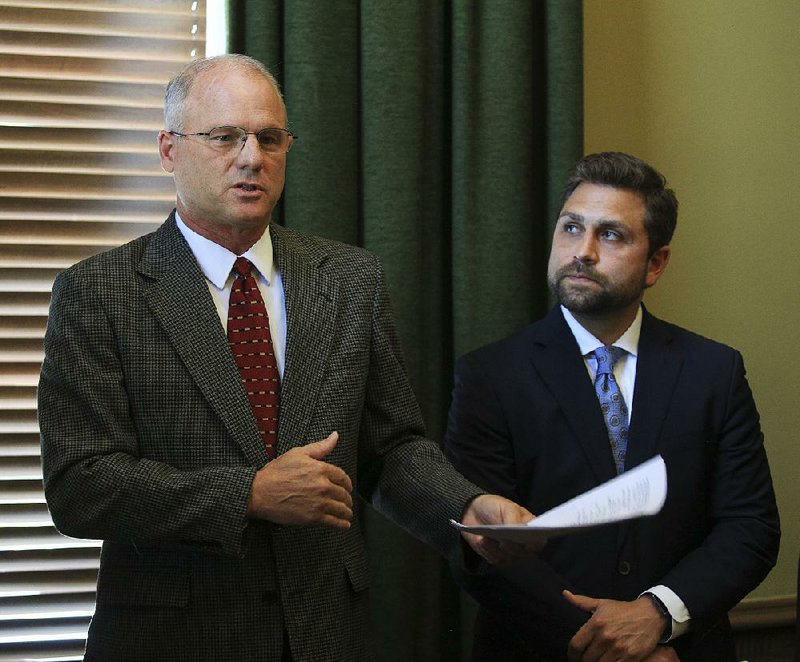 The Arkansas Senate on Friday elected Sen. Jim Hendren as its leader for the upcoming 92nd General Assembly and shifted what committees have jurisdiction over alcohol, tobacco, firearms and medical-marijuana legislation.

During its organizational session in advance of the 2019 regular session, the 35 senators also selected committee assignments and chairmanships, seats in the chamber, office locations and parking spaces. They also approved recommended changes to the Senate's ethics rules that were overhauled in June. The session begins Jan. 14.

During his brief remarks to his colleagues, Hendren, a Republican from Sulphur Springs, asked them to focus on professionalism in representing their constituents and to act with integrity.

"We need to ask ourselves, am I prepared for everything I do and say or agree to be on, disclosed on the front page of the newspaper?" he told senators. Five former state lawmakers either have been convicted or pleaded guilty to federal crimes as a result of investigations in recent years.

Hendren also asked senators to focus on operating efficiently, including more thoroughly filling up their days spent at the Capitol. And lastly, he asked them to treat one another with respect and civility, even during the heat of the debate.

"I think if we do those four things, we'll have a successful session," he said.

Since March, Hendren has led the Senate in its first major changes to its ethics rules in the past two decades. He has taken action to implement video-streaming of the Senate and its committee meetings, starting Jan. 14.

The overhauled rules create a committee on ethics; prohibit senators from certain activities involving conflicts of interests; and require more disclosure of other conflicts and senators' personal finances.

Hendren, 55, has served in the Senate since 2013 and was in the House of Representatives from 1995-2001. He is the owner of Hendren Plastics and director of operations for the Arkansas Air National Guard. His uncle is Republican Gov. Asa Hutchinson and his father is departing Rep. Kim Hendren, R-Gravette.

Senators also altered the responsibilities of some committees.

The Senate voted 25-8 to approve a rule that would shift "jurisdiction over matters pertaining to alcoholic beverages, tobacco products and firearms" to the Senate Committee on City, County and Local Affairs and "jurisdiction over matters pertaining to Amendment 98 to the Arkansas Constitution," which is the medical-marijuana amendment, to the Senate Committee on Agriculture, Forestry and Economic Development.

Stubblefield told senators Friday that the intent of his proposed rule is to shift jurisdiction over bills dealing with growing and distributing medical marijuana to the Senate agriculture committee and health-related medical-marijuana bills to the Senate Public Health, Welfare and Labor Committee. He also suggested his proposal would give some discretion to the Senate's chief legal counsel over whether to assign firearms legislation that changes the state's criminal code to the City, County and Local Affairs Committee or to the Judiciary Committee.

Sen. Alan Clark, R-Lonsdale, and Stubblefield told senators that the proposed rule would help even out the workload among the Senate committees.

Afterward, Stubblefield said he may propose clarifying the rule adopted by the Senate to be in line with his stated intent.

Dismang decided to become chairman of the Senate Revenue and Taxation Committee, which considers tax-related legislation, for the next two years.

"I will not have an agenda, just pretty much the same position I've had when I was pro tempore, just let the majority of the members kind of have control over the discussion, and help manage and moderate that discussion," Dismang said in an interview about his plans as committee chairman.

Hutchinson wants lawmakers to enact his proposal to gradually reduce the state's top individual income tax from 6.9 percent to 5.9 percent over four years and simplify the individual income tax code by reducing the number of tax tables from three to one. State officials project the governor's tax cut eventually will reduce general revenue by nearly $192 million a year.

The Legislature's tax overhaul task force -- co-chaired by Rep. Lane Jean, R-Magnolia, and Hendren -- also is considering recommending bills to cut individual income taxes and corporate taxes that would go beyond the governor's proposal. As a member of the task force, Dismang has pushed for simplifying the income-tax code.

Dismang said the task force "has done a lot of work over the summer and it still has some work left to do."

"I think it may not be the final version, but their recommendations we'll [consider] very strongly when we come into session," he said.

The senators who are on the Legislative Council voted to elect Sen. Cecile Bledsoe, R-Rogers, as the Senate's co-chairman of that body, which oversees the operation of state government when the full Legislature is not in session. Sen. Missy Irvin, R-Mountain View, then decided to assume the chairmanship of the Senate Public Health Committee, a post Bledsoe has held.

Bledsoe said she decided to give up her public health chairmanship because she has held that post for six years.

"It is the hardest-working committee I think in the Legislature and I just needed a break," Bledsoe said in an interview. "It is great committee, but I live 3½ hours from the Capitol and I'm here a lot, so I thought I would just take a break."

"I don't anticipate a whole lot of big crisis issues" in the public health committee, Irvin said in an interview. "I think we have kind of dealt with a lot of that already."

Irvin was asked about the prospect of a federal judge overturning Hutchinson's work requirement for some of the 250,000 people enrolled in the state's Medicaid expansion program.

"If that happens, we'll have to respond, and adjust and recalculate, and move forward," she said.

The senators on the Joint Budget Committee re-elected Larry Teague, D-Nashville, as the Senate's co-chairman on that body, which reviews appropriations bills.

Teague has served in the post since 2013, even though Republicans have controlled the chamber since then. In years past, when Democrats were in control of the Senate, then-Sens. Dave Bisbee of Rogers, Shawn Womack of Mountain Home and Gilbert Baker of Conway, all Republicans, served stints as co-chairman of the Joint Budget Committee.

The chairmen of other committees include: 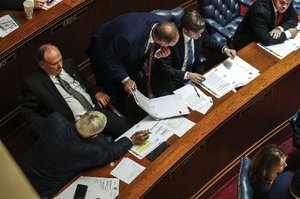 Photo by Mitchell PE Masilun
Senators look over a proposed amendment Friday during its organizational session at the state Capitol. The regular session begins Jan. 14.