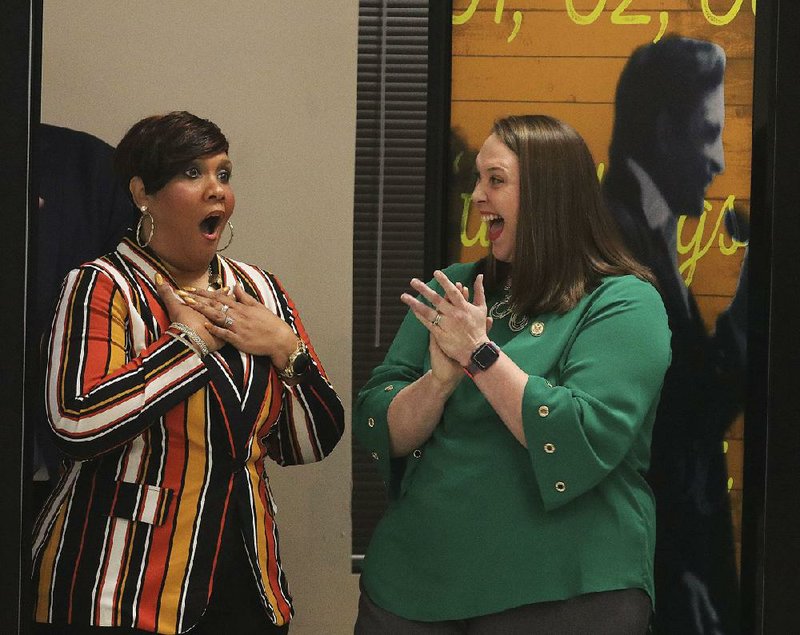 Tasha Wilson (left), a second-grade teacher at Kingsland Elementary School in Cleveland County, gets the news of her selection as a Milken Educator Award winner as teacher Kristina Varnell applauds during a ceremony Friday morning at the school. More photos are available at arkansasonline.com/galleries.

At the assembly she didn’t yet know was being held in her honor, Tasha Wilson stood with her hands clasped.

The second-grade teacher was posted Friday at the end of a row of students, who sat cross-legged on the floor of the Kingsland Elementary School auditorium for remarks on the school’s Blue Ribbon designation. Wilson glanced around the room as Dr. Jane Foley, a senior vice president at the Milken Family Foundation, took the stage to discuss the group’s prestigious teaching prize.

The Milken Educator Award includes a $25,000, no-strings-attached cash bequest, she explained — and Wilson had won it.

The teacher’s hands went first to her chest, then to her mouth, then to a colleague’s arm to steady herself.

“I almost fainted; I had to hold on to one of the other teachers,” Wilson said. “Words cannot explain it. … We’re all just in total shock.”

Wilson, who is one of six full-time teachers at the 70-student elementary school in Cleveland County, is the state’s only winner of a Milken award this year. Up to 40 outstanding educators, particularly early- to mid-career instructors, are honored annually.

Established in 1987, the prize closes a recognition gap for teachers, who don’t receive as many formal accolades as people working in some other fields, Foley said. It’s meant to identify up-and-coming leaders in education, encourage them to stay on in the field and perhaps inspire students to become educators themselves.

Wilson, 40, is a native of Wilmar and a 14-year veteran of the school, where she got her first teaching job. She joins 73 other Arkansas teachers who have received the award over its history.

Now in her eighth year of teaching second grade, Wilson said being a teacher was a lifelong dream that was fueled by her love of reading and learning. By the time she got to college at the University of Arkansas at Monticello, studying education was never in question.

“This was my calling. This was the only profession that I ever thought I wanted,” she said. “I love what I do. For someone to recognize me like this is just the icing on the cake.”

Her teaching stands out, a news release said, for her skillful instruction in the areas of reading, math and writing. Second-graders have shown improved test scores in those areas and typically leave her class able to write five-paragraph essays. She also serves on several leadership teams and subs in for Principal Danny Durey when he’s off campus.

Durey said during his 18 years leading the school, he has watched Wilson develop into a great teacher from a good one.

“With or without that recognition, she’s still a fabulous teacher,” he said. “It’s long overdue in my opinion.”

Durey said it’s significant for a school in a small town like Kingsland — with a population of 447 and most often noted for being the birthplace of musician Johnny Cash — to have received blue-ribbon status and boast a Milken award, especially in the same year.

Teachers cannot apply for Milken awards, and a secretive selection process means only a few people know who will receive the award in advance. Durey said the district’s superintendent had hustled him into into a closet after a meeting to deliver the news.

Past winners have gone on to assume influential positions in education, serving on state and national committees, said Milken Family Foundation Communications Director Jana Rausch in an earlier interview.

In addition to the cash prize, the foundation pays for a trip to a meeting of other winners, who convene for networking and professional development. Rausch has seen previous honorees use their winnings to pay off student loans, purchase homes and even pay for expenses associated with adoption.

With the Milken money, Wilson said she’d love to go on a vacation — her dream is Paris, but she thinks her family might enjoy Disney World more. Standing nearby, her 10-year-old son Galvin grinned with approval.

Arkansas Education Commissioner Johnny Key said it’s important to “be intentional” about recognizing and celebrating teachers, “lifting them up as the inspiration that they are.”

He, too, noted the importance of having a Milken award winner in rural Cleveland County.

“Excellent teaching happens in very small schools,” he said. “We have to show the state that there are excellent teachers in places like Kingsland.”

U.S. Sen. John Boozman, who also attended Friday’s event, praised the work of the Milken Family Foundation and said events honoring educators are among the functions he enjoys most.

“We celebrate so many other things; it’s very important that we take the time to honor the teachers for all that they’re doing,” he said. “[Having Arkansan Milken winners] indicates that we, as a state, are taking education as very, very important.”

Though candidates still are being evaluated, about 35 total winners from elementary schools are expected this school year, Rausch said. Secondary-school teachers are honored in alternating years.

Previous Arkansas Milken award winners Kara Davis, Erin Hodges, Lynn Smith and Roy Barnes were among those at the ceremony applauding as Wilson walked to the front of the room to be celebrated by students and fellow instructors.

She posed for photos with education officials, the past winners and a blue novelty check for $25,000, once appearing to wipe away tears.

“I don’t do what I do for any kind of recognition,” Wilson said. “These kids love me, and I love them, and I am just in awe.”