The following is adapted from a lecture delivered at Hillsdale College on Sept. 27 during a two-week teaching residency as a Eugene C. Pulliam Distinguished Visiting Fellow in Journalism.

Six years ago I wrote a book about Barack Obama in which I predicted that modern American liberalism, under pressures both fiscal and philosophical, would either go out of business or be forced to radicalize. If it chose the latter, I predicted, it could radicalize toward socialism or toward an increasingly post-modern form of leadership. Today it is doing both.

As we saw in Bernie Sanders' campaign, the youngest generation of liberals is embracing socialism openly--which would have been unheard of during the Cold War. Identity politics is on the ascendant, with its quasi-Nietzschean faith in race, sex, and power as keys to being and meaning. In the #MeToo movement, as we saw recently in Justice Kavanaugh's confirmation battle, the credo is "Believe the woman"--truth will emerge not from an adversarial process weighing evidence and testimony before the bar of reason, but from yielding to the will of the more politically correct.

In Claremont Review of Books, we have described our current political scene as a cold civil war: better than a hot civil war, but not a good situation for a country to be in. America is torn increasingly between two rival constitutions, two cultures, two ways of life.

Normal politics takes place within a political and constitutional order and concerns means, not ends--the ends or principles are agreed upon; debate is simply over means. Regime politics is about who rules and for what ends or principles. It questions the nature of the political system itself.

I fear America may be leaving the world of normal politics and entering the dangerous world of regime politics, in which our political loyalties diverge more and more, as they did in the 1850s, between two contrary visions of the country.

One vision is based on the original Constitution as amended--grounded in the natural rights of the Declaration of Independence, the Constitution written in 1787 and ratified in 1788. It has been transmitted with significant amendments--some improvements, some not--but is recognizable still as the original. We may call this "the conservative Constitution" with the caveat that conservatives have never agreed perfectly on its meaning and that many non-conservatives remain loyal to it.

The living Constitution originated in America's new departments of political and social science in the late 19th century--but it was soon at the very forefront of Progressive politics. One of the doctrine's prime formulators, Woodrow Wilson, had contemplated as a young scholar a series of constitutional amendments to reform America's national government into a kind of parliamentary system able to facilitate faster political change. But he quickly realized that his plan was going nowhere. Plan B was the living Constitution. While keeping the outward forms of the old Constitution, the idea of a living Constitution would change utterly the spirit in which the Constitution was understood.

Until the 1960s, most liberals believed it was inevitable that their living Constitution would replace the conservative Constitution through slow-motion evolution. But during the 1960s, the so-called New Left abandoned evolution for revolution. Partly in reaction to that, defenders of the old Constitution began not merely to fight back, but to call for a return to America's first principles. By seeking to revolve back to the starting point, conservatives proved to be Newton-ians after all--and also revolutionaries, since the original meaning of revolution is to return to where you began, as a celestial body revolves in the heavens.

The conservative campaign against the inevitable victory of the living Constitution gained steam as a campaign against the gradual or sudden disappearance of limited government and of republican virtue in our political life. And when it became clear, by the late 1970s and 1980s, that the conservatives weren't going away, the cold civil war was on.

Confronted by sharper, deeper, and more compelling accounts of the conservative Constitution, the liberals had to sharpen--radicalize--their own alternative, following the paths paved by the New Left. As a result, the gap became a gulf, to the extent that today we are fast on the road to becoming two countries, each constituted differently.

The prevailing liberal doctrine of rights traces individual rights to membership in various groups--racial, ethnic, gender, class-based--which are undergoing a continual process of consciousness-raising and empowerment. This was already a prominent feature of Progressivism well over a century ago, though the groups have changed. Before Woodrow Wilson became a politician, he wrote a political science textbook, and the book opened by asking which races should be studied. Wilson answered: We'll study the Aryan race, because it's the one that has mastered the world.

Wilson was perhaps not a racist in a full sense, because he expected the less advanced races over time to catch up with the Aryan race. But his emphasis was on group identity--an emphasis that liberals today retain, the only difference being that the winning and losing sides have been scrambled. Today the white race and European civilization are the enemy--"dead white males" is a favored pejorative on American campuses--and the races and groups that were oppressed in the past are the ones that today need compensation, privileges, and power.

Conservatives, by contrast, regard the individual as the quintessential endangered minority. They trace individual rights to human nature, which lacks a race, ethnicity, gender, and class. Conservatives trace the idea of rights to the essence of an individual as a human being. We have rights because we're human beings with souls, with reason, distinct from other animals and from God. Conservatives seek to vindicate human equality and liberty--the basis for majority rule in politics--against the liberal Constitution's alternative, in which everything is increasingly based on group identity.

There is also today a vast divergence between the liberal and conservative understandings of the First Amendment. Liberals are interested in transforming free speech into what they call equal speech, ensuring that no one gets more than his fair share. They favor a redistribution of speech rights via limits on campaign contributions, repealing the Supreme Court's Citizens United decision, and narrowing the First Amendment for the sake of redistribution of speech rights from the rich to the poor.

In terms of government structure, the liberal Constitution is designed to overcome the separation of powers and most other checks and balances. Liberals consistently support the increased ability to coordinate, concentrate, and enhance government power, as opposed to dividing, restricting, or checking it. This is to the detriment of popular control of government. In recent decades, government power has flowed mainly through the hands of unelected administrators and judges--to the point that elected members of Congress find themselves increasingly dispirited and unable to legislate.

If one thinks about how America's cold civil war could be resolved, there seem to be five possibilities. One would be to change the political subject. If some jarring event intervenes--a major war or a huge natural calamity--it might reset our politics.

A second possibility is that we could change our minds. Persuasion, or a combination of persuasion and moderation, might allow us to end or endure our great political division. Perhaps one party or side will persuade a significant majority of the electorate to embrace its Constitution, and thus win at the polling booth and in the legislature.

Only two presidents in the 20th century were able to effect enduring changes in American public opinion and voting patterns--Franklin Roosevelt and Ronald Reagan. FDR inspired a political realignment that lasted for a generation or so and lifted the Democratic Party to majority status. Ronald Reagan inspired a realignment of public policy, but wasn't able to make the GOP the majority party.

Since 1968, the norm in America has been divided government. Prior to 1968, Americans would almost always (the exceptions proved the rule) entrust the Senate, the House of Representatives, and the presidency to the same party in each election. They would occasionally change the party, but still they would vote for a party to run the government.

Trump is new to this, and his party in Congress is basically pre-Trumpian. He did not win the 2016 election by a very large margin and was not able to bring many new Republicans into the House or the Senate. Nonetheless, he has the opportunity now to put his mark on the party. In trying to do so, his populism--not a word he uses--will not be enough. He will have to reach out to the existing Republican Party as he has done, adopt some of its agenda, adopt its electoral supporters, and gradually bring them around to his "America first" conservatism if he is to have any chance of achieving a political realignment. And the odds remain against him.

So we are left with three other ways out of the cold civil war. The happiest would be a vastly re-invigorated federalism. One of the original reasons for constitutional federalism was that the states had a variety of interests and views that clashed with one another and could not be pursued in common. If we had a re-flowering of federalism, some of the differences between blue states and red states could be handled discreetly by the states themselves. The problem is, having abandoned so much of traditional federalism, it is hard to see how it could be revived.

That leaves two possibilities. With any federal system, there is the possibility that some states will try to leave it. The Czech Republic and Slovakia have gone their separate ways peacefully just within the last generation. But America is much better at expansion than contraction. And George Washington's admonitions to preserve the Union still miraculously somehow linger in our ears. So secession would be extremely difficult for many reasons, not the least of which is that it could lead to the fifth and worst possibility: hot civil war.

Under present circumstances, the American constitutional future seems to be approaching a crisis of the two Constitutions. Let us pray that we and our countrymen will find a way to reason together and to compromise, allowing us to avoid the worst of these dire scenarios--that we will find the better angels of our nature.

Charles R. Kesler is the Dengler-Dykema Distinguished Professor of Government at Claremont McKenna College and editor of Claremont Review of Books. Reprinted by permission from Imprimis, a publication of Hillsdale College. 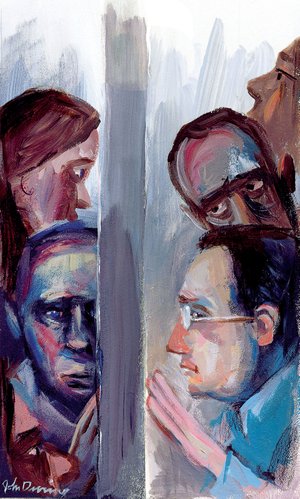