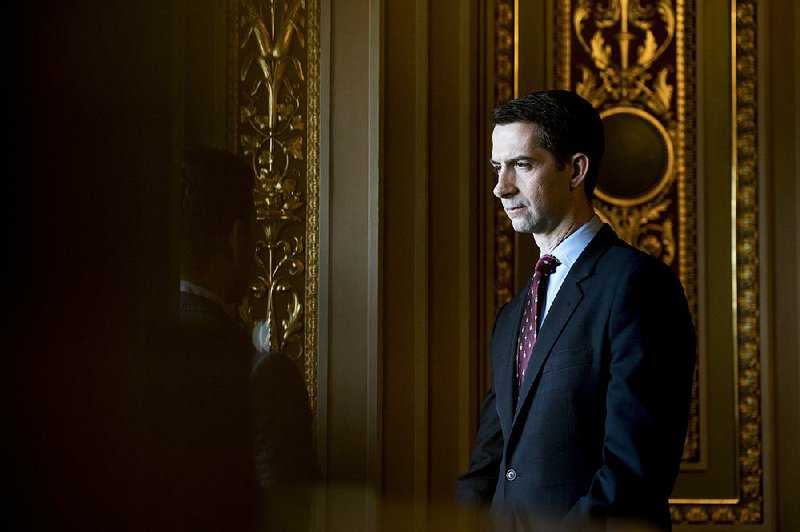 U.S. Sen. Tom Cotton, shown Tuesday on Capitol Hill, blames his Senate colleagues for proposed criminal justice overhaul legislation that, he says, goes into the “direction of criminal leniency,” which he cannot support. Higher incarceration rates have led to safer streets, he said.

WASHINGTON -- Arguing that more Americans belong behind bars, U.S. Sen. Tom Cotton, R-Ark., is promising to fight any efforts by lawmakers and the White House to ease federal sentencing laws.

A White House official defended the legislative proposal Saturday, portraying it as a step in the right direction.

"We have a recidivism rate that is too high in this country. The First Step Act is based on reforms done in many states that have led to reductions in crime," the official told the Arkansas Democrat-Gazette.

Rather than giving greater discretion to "liberal judges," decisions to reduce individual federal sentences should be made by the president, he said.

"I grant that, in a particular case, the interaction of specific facts and the law can create an unjust sentence. If that happens, the best course of action is the scalpel of the governor or the president's pardon and clemency power, not the ax of criminal leniency legislation," Cotton said.

Article II, Section II, of the U.S. Constitution already grants the president the "Power to grant Reprieves and Pardons for Offenses against the United States, except in Cases of Impeachment."

There were 180,975 federal inmates in the U.S. as of Thursday, according to the Federal Bureau of Prisons. That included 3,406 who are incarcerated in Forrest City, the agency said.

"Unfortunately, the Senate proponents have taken it in the direction of criminal leniency. That's not something I can support even though I do support, in concept, prison reform," he added.

Cotton also opposed the House version of the bill. "But it was much closer to a good bill than what we're considering in the Senate," he said.

The earlier version passed in the House 360-59. Only two Republicans -- U.S. Rep. Steve King of Iowa and U.S. Rep. Bill Huizenga of Michigan -- voted against it.

The changes contained in the proposed First Step Act would apply only to people convicted of federal crimes.

If approved, those imprisoned under the three-strikes law would no longer face automatic life sentences; instead they would face 25 years in prison. It would also make retroactive a 2010 law that reduced the disparity between powder-cocaine and crack-cocaine-related convictions.

In addition, the proposed legislation would expand early release programs for low-risk prisoners, enabling well-behaved inmates to serve shorter sentences and to get credit for enlisting in job-training programs, among other things, supporters say.

In the interview, Cotton said he opposes passing laws to shorten sentences. "I think sentencing right now is appropriate," he said.

Reduced penalties for crack-cocaine-related crimes should not be retroactive, he added.

In a 2016 speech, Cotton rejected calls for more leniency, telling a Hudson Institute audience, "If anything, we have an under-incarceration problem."

Asked whether under-incarceration is a problem, Cotton said it is.

Higher incarceration rates have led to safer streets, he said.

"One reason we've seen such sharp declines in crime in this country over the last 30 years is because we finally got tough on crime and we've cracked down on serious drug traffickers and we limited the discretion that liberal judges had to give shorter sentences," he added.

"There are way too many ... people who are convicted of crimes who face no serious jail time, who despite the serious and heinous nature of their offenses end up on parole or some kind of supervised release or home confinement which [places] very little restrictions on their liberty at all," Cotton said. "There are evil, dangerous people in the world. It's a regrettable thing but it's always been so and it always will be, and the only way to keep the public safe from them is to lock them away."

By opposing the First Step Act, Cotton is challenging not only the White House, but also a number of Capitol Hill Republicans.

They argue that long-term sentences for low-risk, nonviolent offenders are expensive and often ineffective. They say their legislation will enable ex-prisoners to become contributing members of society again.

Although there is bipartisan support for legislation overhauling the criminal justice system, Cotton said the bill appeals primarily to a particular type of Republican.

"The proponents tend to be more in the libertarian camp of the Republican Party than in the conservative camp. Many of them have objections to criminalizing drugs at all. I respect their views. Their views are not widely shared by Arkansans who recognize that things like crystal meth and cocaine and heroin and fentanyl are grave dangers to our communities," he said.

Cotton's view of a conservative-libertarian split was dismissed Friday by former Virginia Attorney General Ken Cuccinelli, one of several Republicans who hopes to sway undecided lawmakers.

Cotton told Republican colleagues recently that there may be consequences if they back the legislation, one of the co-sponsors said.

"He was the guy who was most sharply against the bill," Graham told HuffingtonPost.com. "He's saying, 'Someone's going to get out; we're all going to lose our seats.'"

Fear that the legislation will backfire politically is understandable, according to Austin Sarat, a professor of jurisprudence and political science at Amherst College in Amherst, Mass.

"In some places, reform in criminal justice and reform of imprisonment practices is still equated with being soft on crime," he said.

Even when crime rates are falling, there are political risks to these types of changes.

Republicans highlighted that state's furlough program, which had given convicted murderer Willie Horton a weekend pass. Instead of returning to prison, he traveled to Maryland where he committed rape, armed robbery and assault.

"It only takes one dramatic crime to have politicians worry that they're going to be seen as on the wrong side, as soft on criminals," Sarat noted.

The group's parent organization spent more than $220,000 during the 2014 election season to help Cotton unseat incumbent U.S. Sen. Mark Pryor, according to the Center for Responsive Politics, which tracks money and politics.

Often, Americans for Prosperity officials see eye to eye with Cotton, but not this time.

"We're doing our best to persuade Sen. Cotton that this is of interest to Arkansans. We're trying to find common ground with Sen. Cotton to move this forward," said Ryan Norris, the group's state director.

It costs roughly $33,000 per year to lock up an inmate in the U.S., he said. Most of those who are incarcerated -- nearly 90 percent -- will eventually be released, he said.

They need the "models, the tools [and] the support mechanisms on the outside ... that will help them to reintegrate as productive citizens," Norris said.

The U.S. has one of the highest incarceration rates of any nation in the developed world, he said.

"The tough-on-crime philosophy has not worked well," he said. "We have to get smart on crime and use evidence-based solutions ... that are proven to decrease recidivism [and] reduce crime."

Cotton said the legislation is misguided.

"Unfortunately what started as a prison reform effort has transformed into a criminal leniency bill, and I cannot support a bill that will release serious repeat and violent felons early and slash their sentences in the future," he said.

"I do support efforts to try to help prisoners get back on their feet, learn a skill, get a GED, find God and no longer be a menace to society after they have paid their debt to society."