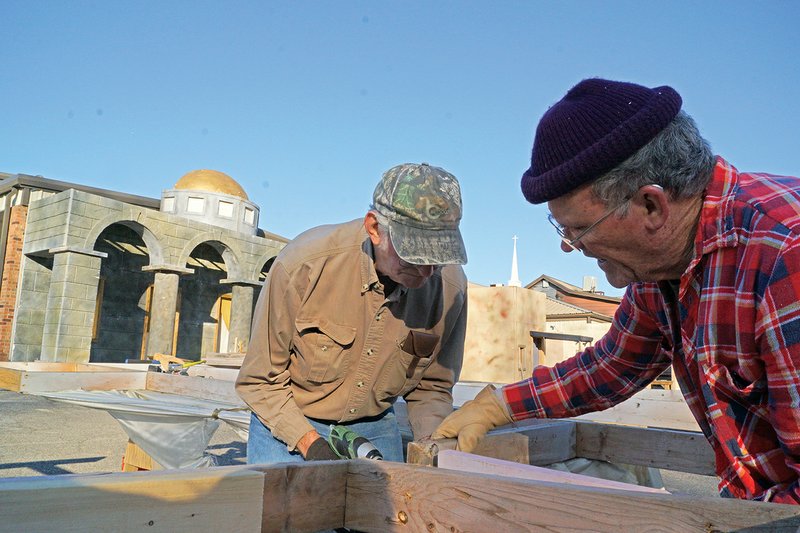 The sights and sounds of Bethlehem are being re-created in the Searcy First Assembly of God Living Nativity, with 150 members dressing as biblical characters, said Mark Ferren, director of the event.

“It’s grown every year,” he said of the live Nativity.

The idea to re-create the night Jesus was born was “a group effort” more than a decade ago, Ferren said, adding that it takes months to plan and organize the Nativity. In addition to the cast, church members volunteer for other jobs.

“It started months ago, the ladies working on costumes — we’ve got a full crew of ladies who do that. We started setting up the end of October. There are guys here almost every day working on [the city],” he said, prior to the opening weekend.

He said some of the wooden buildings are just painted; other buildings have Styrofoam made to look like rock nailed to the front of them.

“The main upgrade this year — the front entrance is all going to be brand new, a little wider to make it easier for cars to get in,” Ferren said.

“Our thinking was when we originally built this, and it’s still my thinking — it was a busy night, everybody was in town, and shops were open. We have a potter’s building, the grain shop, the fabric shop, a lot of businesses. The census taker is there, the tax collector. The temple is there; the palace is there.”

Animals are a big part of the scene, too — camels, cows, donkeys, horses, goats and chickens roam the streets. Ferren said they are provided by a church member, Eddie Boone, who has the Amazin Grazin Exotic Ranch near Searcy.

Ferren said that in the history of the event, things have never gotten too wild with the animals.

When people drive to the church, they line up in the parking lot. While they wait, attendees can watch two large video screens and listen to a radio station programmed to work in conjunction with the scenes being played, Ferren said.

As the vehicles get ready to go through the city, each person is offered free hot chocolate and each vehicle is provided with an audio CD that tells the Christmas story as the viewers drive. Church members also count the people in the vehicles and ask where they live.

To drive the city takes 12 to 15 minutes, Ferren said, but “we don’t want to rush anybody.”

Pastor Rusty Blann said he attended the living Nativity in Searcy before he joined the church 4 1/2 years ago.

“It’s amazing. It’s a huge endeavor, but it’s great to see our church come together and accomplish it and to see the community come out to attend,” Blann said.

He recalled that once when he was in Tennessee, he told someone he was the pastor of Searcy First Assembly of God Church. Blann said he was amazed when the person said, “Aren’t y’all the ones who do the living Nativity?’” Blann said they’d heard about it in Tennessee.

Ferren said that for the most part, despite the whims of the weather, the show goes on.

“We’ve had snow; we’ve had rain. We will stay out as long as we can. If it does start to rain pretty steady, we have to stop because of the costumes getting wet,” he said. “Sometimes we come in and go back out.

“There’s no set script because cars are constantly moving by … but we ask [the actors] to play their parts.”

Paula Heathscott has been a member of the church for about 30 years, and she has played many different roles in the living Nativity.

“I have been the vendors, selling baskets, selling material,” she said. I’ve been the innkeeper’s wife, helped with the bread-making.”

A woman in the church bakes and freezes bread prior to the event.

“We actually put it in a brick oven outside, fired up, and we’re baking bread the whole time. It’s a very popular spot with the kids, that homemade bread,” she said, laughing.

Heathscott said that for the past three years, she has been one of the zone leaders, helping to coordinate people in and out of spots for breaks and keeping the movement going.

“It is an amazing opportunity because you know that you’re performing a skit, per se, but when you dress out in your costumes and you step out and see the entire city, and the torches and fires are lit, you see the camels and the donkeys, and you’re like, ‘I’m here — I’m walking the streets of Bethlehem,’” she said.

The performers try to stay in character, but they overhear comments from the attendees, Heathscott said.

“Just the amazement, and so many times as cars round that corner, [you hear], ‘Look, it’s baby Jesus!’ It brings tears to your eyes,” Heathscott said.

The manger scene is last — with Joseph, Mary and baby Jesus.

Ferren, a children’s pastor at the church, said he enjoys the entire event, but his favorite thing is to watch the children’s reactions.

“I love hearing the little kids,” Ferren said. “I love sitting out in the city and hearing a lot of chatter from the kids and things they’re saying.

“My all-time favorite story — I happened to be out there, and a little girl right at the end said, ‘There he is! There’s my baby Jesus!’ That’s one I’ll never forget because that’s why we do it.”