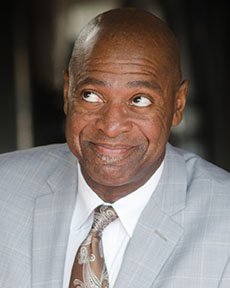 Courtesy photo Stand-up comedian Sam Adams got a taste of fame after his "True Color" bit went viral this summer. He performs in Harrison Dec. 7.

When a comic routine Sam Adams had been performing for 10 years went viral this summer, he got a taste of celebrity while garnering attention from some unexpected places. The former reporter's joke on finding his "true color" has amassed more than 28 million views (10 million of that coming in just the first three days). The very first request to book Adams following the clip's posting on Facebook came from Harrison's Lyric Theater. Adams admits after discovering Harrison is home to the Knights of the Ku Klux Klan headquarters, he thought the request must be a joke. Here, he shares a little with What's Up! about his upcoming show in The Natural State.

Q. So, beyond thinking the booking request was a hoax, what were your initial thoughts/feelings at your first booking request following the viral video being from the town that's home to the Klan?

WHERE — Lyric Theater in Harrison

A. My first meant-to-be funny thought was, "Are they selling tickets to Klan rallies now?" My first serious thought was, what are the odds -- black dude establishes skin tone as a shade of brown in a comedy video clip that goes viral on Facebook, and a small town in Arkansas labeled most racist in America calls first... Really? You can't make it up. So initially, I wanted to see it through. Then I started reading the negative stories online about Harrison, ... but from what I could see, Harrison couldn't be a town of 13,000 racists. I decided to book the show, knowing the town's slogan is "Adventure Awaits You." I'm about to find out first-hand on Dec. 7.

Q. Particularly in the climate we're living in, you must have legitimate concerns for even showing up to a town reportedly like this. Can you share your reasons for booking the gig?

A. First reason is, I always can use the bookings. I lost my job as a sports writer in 2009 and chose to make stand-up comedy my full-time profession. Finding the gigs to make a decent living isn't always easy. Many people will say this is a gig I should turn down because of Harrison's reputation. I understand that. But my second reason is, I thought about the opportunity created from this bit. It's a part of my show people want to see -- a signature bit. And this video clip has made me a one-hit wonder -- for now. Harrison wants to see me, so I'm coming. Yes, I'm concerned about the setting, [but] curious might be a better word.

Q. What kind of message do you hope your booking this gig sends -- to people of color, to the not racist citizens across the country, and to those who do align with that way of thinking?

A. I end my shows with a message, usually reminding all to treat people the way you want to be treated -- and hopefully it's with kindness and respect. Seeing so many responses [to the clip] along the lines of "great message" and "our differences are what makes us interesting and great" reminded me of how rare it is for a comedian of my small stature in the business to have a comedy bit that millions have viewed. My hope is that there will be plenty of young people in the audience. I want them to know how I grew up... I experienced racism and race-related riots for nearly half of the first 16 years of my life. But things changed.

But I'm not coming to Harrison, Ark., to lead a color/race crusade. I'm not coming to admonish or berate racists, or vituperate on the topic of race. I'm coming to perform comedy. And it's really not a totally race-related show. But if there's something expressed within the content of my show that makes you think differently, and hopefully positive about something -- be it race or whatever -- then I've done my job to make the audience think ... and of course, laugh.