Worst Hogs ever? An analysis of Arkansas' 2018 season 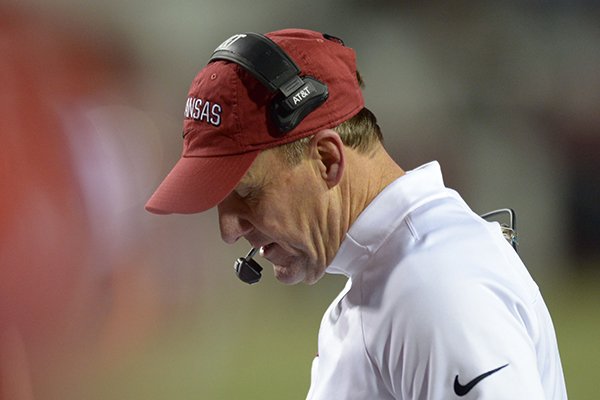 Arkansas coach Chad Morris works on the sidelines against LSU Saturday, Nov. 10, 2018, during the fourth quarter of play at Razorback Stadium.

The Razorbacks had the most losses in school history with a 2-10 record, and their second winless conference season in the SEC at 0-8.

Does that make the 2018 Hogs the worst team in the history of the program? That is up for debate.

From a production standpoint, the defense this fall was better than the 2017 defense. The Hogs had seven more sacks (26 to 19) and improved their rankings across the board.

The Razorbacks' lack of team speed and dynamic play making was evident on both sides of the ball and on special teams. Coach Chad Morris and his staff have recognized that problem and have vowed to recruit themselves out of the hole in coming years.

Morris and Athletic Director Hunter Yurachek have both said they will get the football program "right."

Industry insiders and friends of Morris have said it will take three years to return Arkansas to prominence. Morris will certainly have that long of a leash, but showing improvement in 2019 is very important for his tenure.

The fact they did neither racks up enough demerits to put them in the dialogue. Scoring the most points of any Alabama opponent in a 65-31 loss to the No. 1 Crimson Tide -- which shut out both LSU and Mississippi State -- plus the close-call 24-17 losses to Texas A&M and LSU are strong arguments that there have been worse teams on the Hill.

Though Morris is responsible for only a fraction of the current state of the program, here is the reality: Arkansas has been left out of the postseason for the fourth time in the past seven years.

Since Bobby Petrino got the boot for his off-the-field shenanigans, the Razorbacks are 35-52 overall -- including 13-43 in the SEC -- in seven years.

Needless to say, the University of Arkansas have been running at or near the bottom of the SEC for most of the past seven years, and fans are looking for that trend to change soon.

Now a look back at some of the highs and lows of the 2018 season.

Arkansas 23, Tulsa 0. Obviously there was slim pickings in this category, but a shutout in the midst of a storm is still a shutout. With starting quarterback Ty Storey out with a concussion, the coaching staff gave Connor Noland a manageable game plan and the true freshman executed it well. The Golden Hurricane helped out with missed midrange field goals on their first two possessions and also stalled on downs at the Arkansas 18 at game's end. Arkansas won in total offense 327-260 and held Tulsa to 8 of 25 passing with an interception for 127 yards.

There were blowouts in losses at Mississippi State (52-6) and Missouri (38-0) to close the year, and there were heartaches in a road loss at Colorado State (34-27) and the Little Rock setback against Ole Miss (37-33), but there was nothing like North Texas 44, Arkansas 17, on Sept. 15 at Reynolds Razorback Stadium. The Razorbacks were flat and lifeless and pushing all the wrong buttons with a 6-1 turnover deficit, despite being outgained only 376-336 in the most embarrassing loss of the season.

Troubling signs were apparent in the season opener as the Razorbacks gave up 357 total yards and were outrushed 127-80 in a 55-20 victory over Eastern Illinois in the opener. Ty Storey came off the bench to complete 12 of 17 passes for 261 yards and 3 touchdowns, including scoring strikes of 48 and 57 yards to La'Michael Pettway and Jordan Jones. The Razorbacks would not have another passing day like it the rest of the year.

Scoring 31 points against Alabama was quite a feat, but the same-score 24-17 losses to Texas A&M and LSU were more impressive overall showings. The game against the Aggies, in which Arkansas held Morris' alma mater and defensive coordinator John Chavis' last employer to 377 total yards and just seven points in the final 45 minutes, seemed more winnable.

The game plan against the attacking Alabama defense -- using swing passes to backs and middle screens to tight ends -- exploited the Tide's aggression and helped open up the run game for Rakeem Boyd, who rushed for 103 yards. It also showed that the offensive brain trust, led by Morris and coordinator Joe Craddock, can scheme up things in big games, which should pay dividends down the road.

Leading 27-17 at the end of three quarters at Colorado State, the Razorbacks had the entire quarter break to discuss a plan for fourth and 1 at the 50-yard line. The Razorbacks had run 48 times for 291 yards to that point, an average of 6.1 yards per carry. Morris chose to punt. The better call would have been to show confidence in both the offense and defense and go for it on fourth down. Morris' decision looked OK when Reid Bauer punted 46 yards to the Rams' 4. But K.J. Carta-Samuels led Colorado State on a 96-yard touchdown drive as the Rams scored 24 points on their final four possessions for a 34-27 victory.

Two selections here starting with La'Michael Pettway's 39-yard touchdown catch on Cole Kelley's first snap off the bench against Ole Miss. Also, Cheyenne O'Grady shook off one LSU defender then ran through another for a 32-yard touchdown pass from Ty Storey to draw Arkansas within 24-17 against LSU.

The Razorbacks had a fumble recovery touchdown -- Briston Guidry's pounce after a strip by Armon Watts against Eastern Illinois -- but there's a three-way choice. First a pair of fourth-and-short stops: De'Jon Harris and Michael Taylor's combined stop of Auburn's JaTarvious Whitlow at the Arkansas 8 on fourth and 2, and McTelvin Agim and Santos Ramirez's stoning of LSU's Clyde Edwards-Helaire at the Arkansas 25 on fourth and 1. Then Dre Greenlaw's 24-yard fumble return after Agim's strip-sack against LSU's Joe Burrow, leading to an Arkansas field goal just before halftime.

Connor Limpert booted a 55-yard field goal to cap Arkansas' first drive of the second half against Vanderbilt. It was the longest field goal by a Razorback since Kendall Trainor's 55-yarder in 1988.

Most 'what if' play

A different replay review might have found that receiver Jordan Jones tapped a foot down for a 28-yard touchdown catch from Cole Kelley with Arkansas leading Colorado State 27-9 midway through the third quarter. Instead, the "incomplete" call on the field was upheld and Arkansas missed a 48-yard field goal moments later. Instead of leading 34-9 or 30-9, the Razorbacks could not build on their advantage and, well, you know the rest of the story.

Hjalte Froholdt gets the nod here. The senior from Svendborg, Denmark, was one of the best pass blockers in the country, allowing one sack.

Tight end Cheyenne O'Grady had the most touchdowns with 6, but La'Michael Pettway showed the most game-day consistency, tying O'Grady with a team-high 30 catches and leading the club with 499 receiving yards.

Rakeem Boyd made a splashy debut in the SEC two years after signing with home-state Texas A&M. Boyd ran for a team-high 734 yards and 2 touchdowns and averaged a hefty 6.0 yards per carry.

Tie. Armon Watts had a breakout year with 49 tackles and a team-high 7 sacks, while McTelvin Agim had 45 tackles and led the Hogs with 10 tackles for loss and 11 quarterback hurries.

Another tie. De'Jon Harris ended the regular season with an SEC-high 118 tackles, including 9 tackles for loss and 2 sacks. Dre Greenlaw, limited to eight games, had 80 tackles for a team-high 10.0 per game and led the SEC with a missed tackle rate of 2.7 percent, according to College Football Film Room.

Some of the best passing teams went right after junior cornerback Ryan Pulley, who had 37 tackles and team highs with 3 interceptions and 7 pass breakups, but he was almost a shutdown guy against mid- and low-level passing teams.

Print Headline: Worst Hogs ever? An analysis of Arkansas' 2018 season