Rayjon Tucker wanted to do his own research.

The University of Arkansas at Little Rock men's basketball program recently had entered a full-scale reboot by hiring Darrell Walker in March, and the first phase was cleaning house.

Tucker was no stranger to an unstable relationship with his coach. His freshman and sophomore seasons at Florida Gulf Coast University were marred by a strained relationship with Joe Dooley, FGCU's coach from 2013-2018.

"My time at Gulf Coast," Tucker said with a careful pause, "it was good. I liked Gulf Coast. I just didn't feel like me and Coach Dooley had the same plan for my basketball career. We weren't on the same page. Other than that, everything was pretty good."

Tucker's role at FGCU did not expand at the rate he envisioned, and he started only seven games in two years with the Eagles. He averaged 7.7 points in 18.8 minutes during his sophomore season.

Former UALR Coach Wes Flanigan was an assistant coach at Mississippi State from 2012-2015 and routinely would write Tucker letters during his initial recruitment. When Tucker was looking to transfer, a connection with UALR already existed through Flanigan.

He chose UALR and sat out last season per NCAA transfer rules.

"I mean, it was terrible," Tucker said of sitting out for the Trojans' 7-25 season . "With how the season was going and coming from Gulf Coast who had been in the tournament two consecutive years, I definitely wasn't used to losing."

Once Flanigan was fired and Walker was hired, there was a chance Tucker would be on the move again.

"Me and my mom had a talk and definitely did some research on Coach Walker to see what he was about before I just made a decision on whether to leave or not," Tucker said. "I'm definitely glad I stayed. Coach Walker is a great coach. Great staff. The guys he brought in are great kids."

Tucker's 20 points per game rank fifth in the Sun Belt Conference, and he is playing a league-high 36.3 minutes per game. The Charlotte, N.C., native has started all eight games he has appeared in for the Trojans (4-5).

"He's definitely a guy that if the game's on the line, you're going to look to give him the ball," Walker said.

From Walker's perspective, it took time before he realized Tucker was worth keeping after the tear-down. Tucker's athleticism pops to the eye. A muscular 210-pound, 6-5 guard, Tucker's vertical leap can level the crown of his head with the rim.

"I figured he would be a good player because he has a lot of athletic ability, but he hadn't proven anything because he hadn't played in two years," Walker said. "I didn't know what I was going to get."

Tucker's first eight games as a Trojan show why Walker believes he can thrust this rebuild forward. He has scored 20-plus points in four of his past six games, and he has yet to score fewer than 14 points in a game.

Tucker's career journey came full circle Tuesday. After a breakaway dunk in the Jack Stephens Center, he glanced to the arena's roof, saw 0.04 seconds remaining in UALR's 68-62 loss to Bradley University and slapped his hands together, unsatisfied with the loss and out of time.

His teams at FGCU were successful, even if his contribution wasn't significant. Right now, he has an opportunity with the Trojans, who are trying to establish a winning culture.

He's the guy at UALR, and he is happy with how things are playing out. 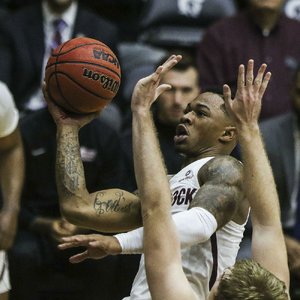