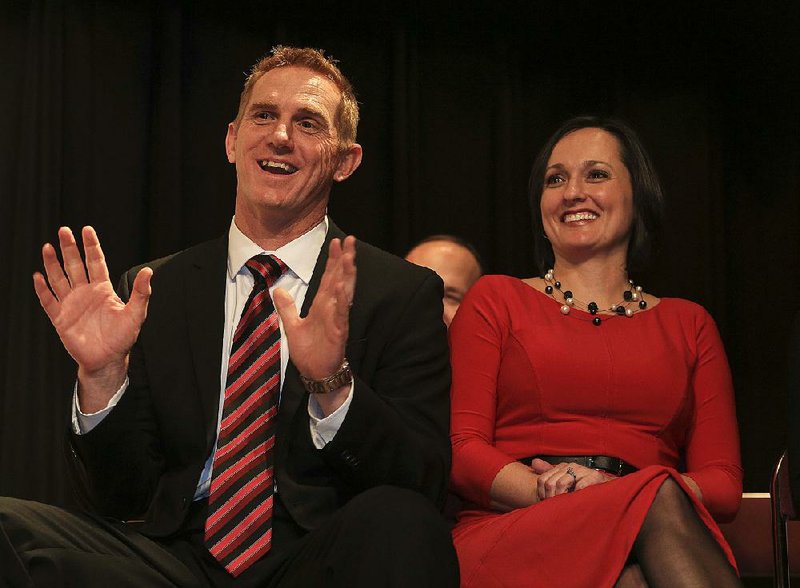 Meeting agendas were written from his computer and conducted via FaceTime and Skype for 3 1/2 weeks in the spring of 2017.

That trip to Mexico was the second leg of a journey that has no end in sight and has recently restarted.

Applying aloe vera to aid a sunburn, Wendy Anderson, 48, felt an unusual lump a year and a half ago. It was triple-negative breast cancer, a more aggressive form likely to spread and recur. A fight against breast cancer had started for the wife of ASU's head coach.

After being originally told the cancer was inoperable, surgeons were able to extract it. Opting against chemotherapy, Wendy chose immunotherapy treatment not offered in the United States to help eradicate the disease. It worked.

"In the last year and a half," Blake said, "it's really been quiet."

The Andersons prepared for the possible return, knowing the cancer could recur within a three-year window. In mid-September, one year after Blake told ASU's 2017 team that Wendy was cancer-free before the season opener, they entered into brief denial and feared the worst.

The Red Wolves were putting together their finest non-conference season since 2000 at the time. They had defeated Southeast Missouri State, traveled to No. 1 Alabama and took an expected pounding and downed Tulsa and UNLV at home.

Wendy traveled to Tulsa for the 29-20 victory on Sept. 15. She began coughing. A shortness of breath reappeared. The symptoms revealed the Andersons' biggest fear was becoming real. Again.

"Really, we were searching for any other answer, but the cancer was back."

The Andersons wanted to control the announcement of the cancer's recurrence.

Cancer's reappearance inside the wife of ASU's head coach would incite questions, and they needed to prepare for them. First, the Andersons wanted their children, daughter Callie, and sons Coleton and Cason, not to find out through social media that Wendy's breast cancer returned a year after they announced she was cancer-free.

Wendy's coughing began increasing from mid-September. Chest X-rays indicated to the Andersons four games into the 2018 season that the fight was restarting. Again, the Andersons are being told surgery is not an option.

"It was kind of our worst fear and we kind of realized it at that point," Blake said.

With news starting to spread on social media one day after ASU's season-finale Nov. 24, the Andersons had no ideal time to publicly disclose Wendy's cancer not only returned, but had spread to the lungs, lymph nodes, rib cage and liver.

The worry of being a distraction from football weighed heavy.

"So, to some degree, you want to honor the platform and the position God's put us in in the right way. But at the same time, I'm the head coach. She's not. She didn't sign up for some of this. I don't want to force it on her, either."

For those reasons, Blake said, Wendy opted not to be interviewed for this article. The Andersons plan to receive a full, clarifying pathology report on Wednesday, outlining the extent of cancer resurgence and possible future treatment options.

"We got through the season, now where does it carry us through the offseason and beyond?" Blake said. "I really don't know. She may be able to kick this thing's tail. She may just keep rolling. I don't know."

The Red Wolves will travel to Tucson, Ariz., for the Dec. 29 Arizona Bowl, and the cancer's return has put ASU's head coach's availability for the bowl game -- and beyond -- in question.

Although they are unsure if Wendy will be able to accompany the team to Tucson, Anderson intends to coach the Arizona Bowl.

Until treatment plans are explained, the future for ASU's head coach is unknown even by him.

There is no certainty if the illness leads to a coaching change.

"This is a long journey that's coming up," the coach said. "They're not going to be able to do surgery and get this. It's in way too many areas in her body. This is going to be treatment of some kind. We're looking at a long road of something. It's not like they can just go in and pluck it out. It's everywhere.

"How do I balance it? That's where I'm really fortunate. I've got great bosses that are all-in and say, 'Do what you need to do.' We'll make it work."

Anderson said there was no shortage of support for the family when Wendy was treated in Mexico.

"They're all ready to do that again," Anderson, 49, said. "I don't know if they'll need to, because right now we're not there yet."

"They're an amazing couple," said ASU Athletic Director Terry Mohajir. "Their faith is extremely strong. Their belief system is even stronger. The Arkansas State community has said many prayers and sent many warm wishes.

"We'll just continue to be there for them for whatever they need," Mohajir said.

The Red Wolves' embrace has been overwhelming to the Andersons. The assistance from the couple's fellow-churchgoers at Central Baptist Church in Jonesboro never wavered when Blake was out of the office and out of the country to be beside Wendy.

"I can truly say that we are a family," ASU safeties coach and passing game coordinator Allen Johnson posted on Facebook on Nov. 24.

"She is one of the fiercest fighters I have ever seen in my life," the post read. "She has been an inspiration for me and our team."