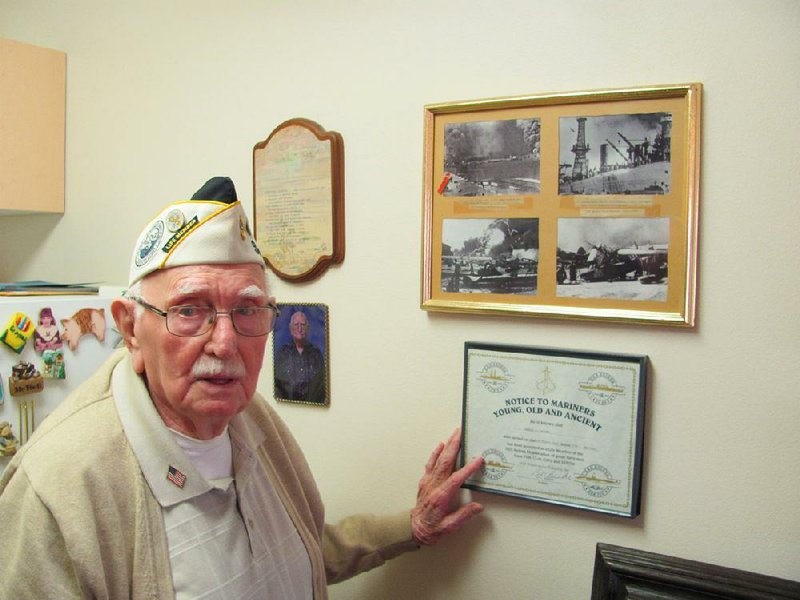 Pearl Harbor survivor Harold Mainer was aboard the USS Helena on Dec. 7, 1941, when the boat was damaged by a torpedo at Pearl Harbor. The Helena went on to see lots of action in the Pacific before it was sunk by torpedoes on July 6, 1943, in the Solomon Islands.

FORT SMITH -- Harold Mainer was standing at the stern of the light cruiser USS Helena docked at Pearl Harbor on the morning of Dec. 7, 1941, about to go ashore to celebrate a friend's birthday.

The 20-year-old first-class petty officer from Paris, Ark., watched as a bomb fell into the water, then two more hit the airfield at Ford Island. An airplane flying over the Helena nosed up and began to climb, revealing the Japanese Rising Sun emblem on the wing.

Today Mainer, 97, will be honored as a Pearl Harbor survivor at a ceremony at the Arkansas Inland Maritime Museum on the banks of the Arkansas River in North Little Rock.

Mainer will be reunited during the ceremony with the Hoga, a harbor tug that also saw action in the Pearl Harbor attack and the days after. The museum acquired the tug and is restoring it as a museum exhibit. The Hoga -- a Sioux word meaning fish -- will be opened to the public today for walk-through tours while restoration continues.

Mainer joined the Navy in October 1940 after spending two years with the Depression-era Civilian Conservation Corps at Cass in Franklin County. Although he had never seen an ocean, he had a practical reason for choosing the Navy over the Army.

"I wanted a clean bed and a hot meal," he said, chuckling.

He went through boot camp in San Diego and was assigned to the Helena, but he had to hitch a ride on the battleship USS West Virginia to catch up with the Helena at Pearl Harbor. 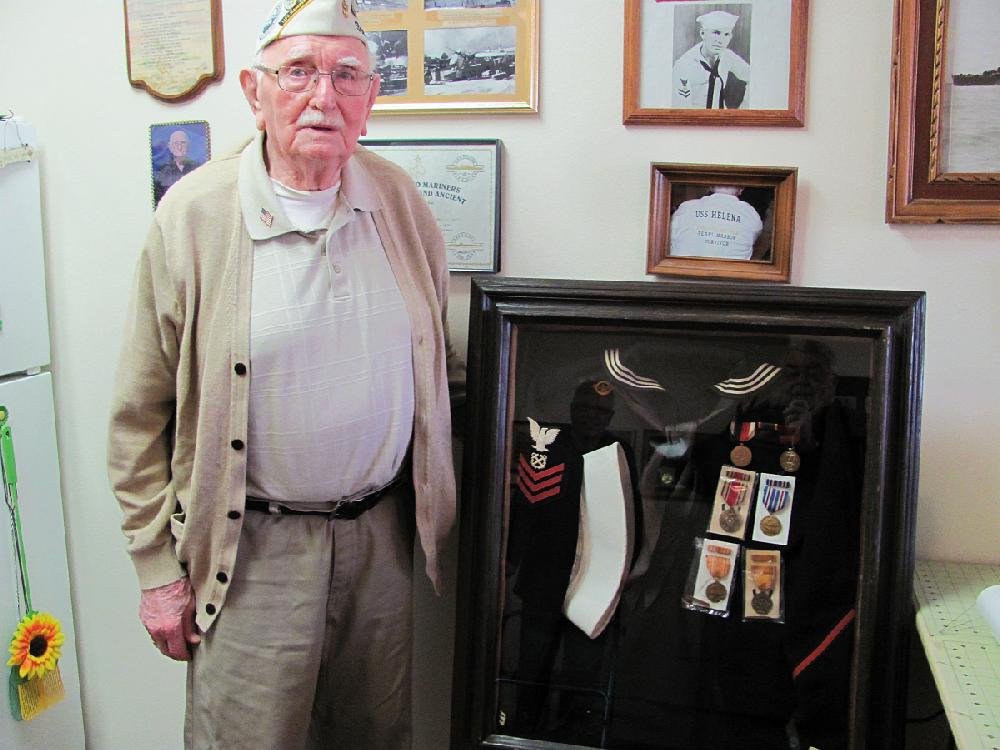 Harold Mainer of Fort Smith, who was at Pearl Harbor when the Japanese attacked on Dec. 7, 1941, shows the uniform he wore and the medals he was awarded for service aboard the USS Helena during the war. A photo of a young Mainer on the wall above the display was taken after the light cruiser Helena was sunk in battle in July 1943.

Mainer was a deckhand. His general quarters assignment, or battle station, was on the shell deck where he helped load projectiles into the guns of turret four in the back half of the ship.

That's where he ran immediately after the attack began, but the ship's 6-inch main cannons were useless against the aircraft because the guns could not be elevated high enough to shoot at the planes, Mainer said.

As he sprayed down the deck, a shoe washed up to him. The shoe had a shine on it, and Mainer said he knew there was only one person on the ship who could shine a shoe like that.

"Quick as I saw the shoe, I knew it was John Pensyl [a gunners mate]," Mainer said. "So I grabbed Chuck [the petty officer] around the arm and said, 'That was John, wasn't it?' He said yes and now get busy and clean it up."

Pensyl had been killed by shrapnel that tore away the top of his body, Mainer said. He was one of 33 men on the Helena who died Dec. 7 or in the following days from wounds suffered in the attack. Another 67 were wounded, according to records.

There was no time to think about lost shipmates or the danger around him, he said. Training took over, and he did his job.

But he had time to take in the destruction around him. Mainer said he saw the USS Arizona explode across the harbor from the Helena and the USS Oklahoma capsize.

The Helena was hit by a torpedo during the attack. It was moored against a dock, and a minelayer, the USS Oglala, was tied up next to it. The torpedo went under the Oglala and exploded against the Helena in the engine room.

The Helena was in shallow water so it didn't have far to sink, Mainer said. But the concussion of the exploding torpedo knocked a hole in the wooden-hulled Oglala and the Oglala began to sink. Two tugs, one of them the Hoga, towed the Oglala away from the Helena so the Helena would not be pinned against the dock, Mainer said.

According to the Naval Historical Foundation, the Hoga and another tug also kept the damaged USS Nevada from blocking the harbor channel as it tried to steam out of the harbor. The Hoga pulled men out of the water and used the Hoga's firefighting equipment to fight fires on the Nevada and on ships all along Battleship Row.

Mainer said he was never afraid during the attack until that night, when word passed around that more planes were coming in. They turned out to be American planes flying in from the mainland.

"You get scared when you have time to stop and think," Mainer said.

Crews welded steel plates over the hole in the Helena and refloated it so it could return to the mainland for more permanent repairs, Mainer said. He said the ship returned to Hawaii around February and missed the battles of Coral Sea and Midway.

"After that, I was in every skirmish at every little two-bit island until July 6, 1943," said Mainer, referring to the day the Helena was sunk in the battle of Kula Gulf in the Solomon Islands.

The Helena saw a lot of action during its part of the war. Naval records show that it was present in the battle of Guadalcanal on Nov. 13, 1942, when the light cruiser USS Juneau was sunk by an enemy torpedo, claiming the lives of the five Sullivan brothers from Waterloo, Iowa, who had asked to be assigned to the Juneau together.

The Helena's demise came from three torpedoes nine months later in a night action. Accounts say the Helena was aggressively firing her guns but was the only American ship in the battle that wasn't equipped with flashless powder, which illuminated it as a target.

The first torpedo struck the front of the Helena and severed its bow. The second and third torpedoes hit midship and broke its back, Mainer said. After abandoning ship, Mainer said, he was in the water for four hours before another ship picked up him and others.

Many crewmen who were in life rafts drifted off and managed to land on an island. They were rescued two weeks later.

Of the 900 crew members on the Helena, about 300 were killed in the sinking, Mainer said.

The wreck of the Helena was discovered in March by an expedition sponsored by Microsoft co-founder Paul Allen. Reports said the ship was in about 2,500 feet of water. The Helena's designation "50" was clearly visible on the bow in the video that a submersible craft sent back to searchers.

Mainer said when he heard about the discovery, he thought about the men who were trapped in the ship when it sank.

Mainer was next assigned to the tugboat USS Munsee. At one point the Munsee was assigned to Iwo Jima during the battle there. Mainer remembers seeing American and Japanese soldiers lying dead side by side on the beach.

At the war's end, the Munsee was assigned to patrol Tokyo Bay during the ceremony Sept. 2, 1945, when Japanese officials surrendered to the Allies on the battleship USS Missouri. Also on hand was the submarine USS Razorback.

After the war, Mainer took a job working for a grocer in Tulsa. He liked the job, but a friend who was a postal worker persuaded Mainer to apply for a post office job. He passed the test and went to work delivering mail in Fort Smith, something he did for 31 years, retiring in 1982.

Asked how the events of Dec. 7, 1941, affected him, Mainer said, "Physically, it really didn't. You never get over it, but you don't think about it. You have to go on."

CORRECTION: Harold Mainer’s last name was misspelled in an earlier version of this article in Friday’s editions about his experiences surviving the Japanese attack on Pearl Harbor.