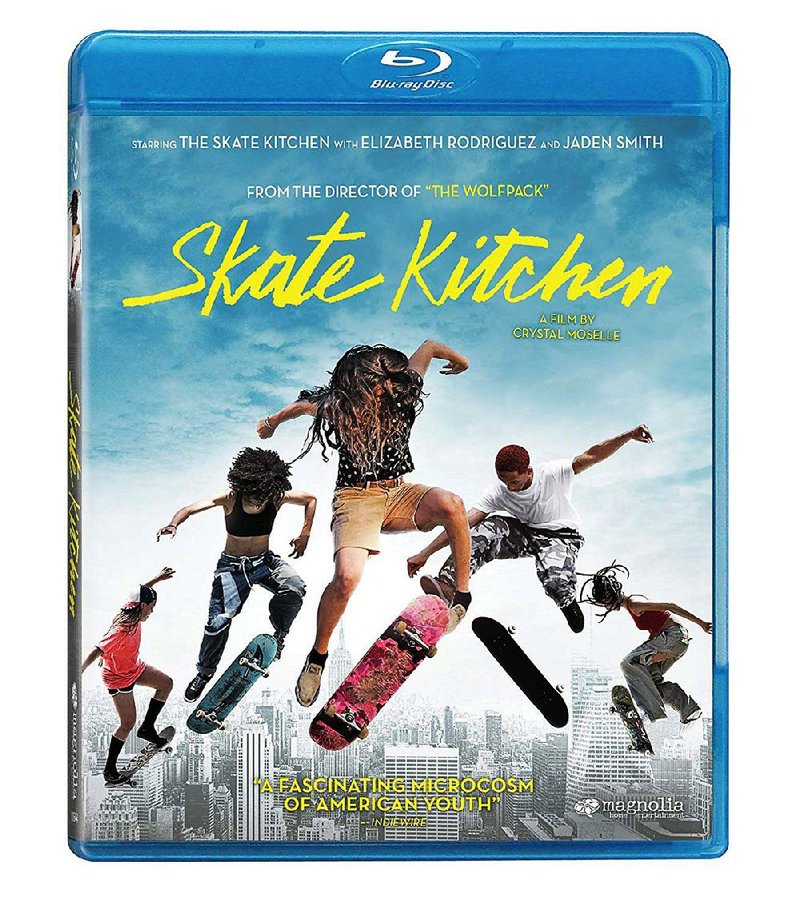 It feels like a shot-on-location documentary with real-life characters, genuine downtown New York locations, and spot-on teenage dialogue. But Skate Kitchen is a highly realistic and believable narrative feature, populated with non-professional actors playing versions of themselves. Not much happens. What does happen is natural and relevant. And the film is terrific.

At the center is Camille (Rachelle Vinberg), a lonely and bored Long Island 18-year-old, the daughter of split-up and at-odds parents whose only passion is skateboarding, discovers that where you live isn't necessarily where you belong. On a whim, she takes a bus to the city, where her life changes for the better when she joins a rowdy group of supportive, confident, defiant, and adventurous girl skateboarders.

Within their close circle Camille learns what friendship can be, along with picking up a few lessons in love and in getting along with her protective, conventional, and pretty much baffled mother (Elizabeth Rodriguez of Orange is the New Black). Less-than-perfect stuff happens, but nothing earth-shaking. Still, it's fun to relive some of the day-t0-day adventures of being 18 by hanging out with this rowdy girl crew.

Operation Finale (PG-13, 2 hours, 3 minutes) Operation Finale is not a work of political and/or moral philosophy. It's a Hollywood movie in which the good guys eventually win, even over the glamorously evil.

Screenwriter Matthew Orton and director Chris Weitz (About a Boy) made a movie about the hunting top Nazi Adolf Eichmann and his role in the murder of millions of people. It is watchable enough, especially as Mossad agents plan the operation to snatch Eichmann (Ben Kingsley) off the streets of a working-class Buenos Aires suburb in 1960.

Unfortunately, once the agents have Eichmann in their safe house, the movie has to find ways to invent tension, and the film embarks on a generic game of psychological cat and mouse. It hits all the usual beats, but avoids every opportunity to delve beneath the surface. Kingsley's Eichmann is just another over-civilized monster.

Mission: Impossible--Fallout (PG-13, 2 hours, 27 minutes) Unlimited action and entertaining thrills will please fans of this franchise and exhaust others. As always, Ethan Hunt (Tom Cruise) and his team, along with some allies, race against time on a mission that's predictably gone wrong. With Rebecca Ferguson, Henry Cavill, Simon Pegg, Ving Rhames; directed by Christopher McQuarrie.

The Happytime Murders (R, 1 hour, 31 minutes) A pushy, raunchy, and sometimes unsettling comedy in which the puppet cast of an '80s children's TV show are murdered one by one, a private eye puppet investigates. With Melissa McCarthy, Elizabeth Banks, Maya Rudolph, Joel McHale; directed by Brian Henson.

Support the Girls (R, 1 hour,33 minutes) Fun, spirited, strong and good-hearted, this witty comedy celebrates sisterhood with help from the general manager at a roadside sports bar who makes good use of her ample optimism and faith during one long, up-and-down, and really weird day. With Regina Hall, Haley Lu Richardson, James Le Gros; directed by Andrew Bujalski.

Elizabeth Harvest (R, 1 hour, 49 minutes) A modern horror/science fiction thriller that's moody, complicated, slow-moving, and way too complicated, Sebastian Gutierrez's thriller revolves around newlywed Elizabeth (Abbey Lee) and her much older scientist husband Henry (Ciaran Hinds) who set up housekeeping at his magnificent estate, where she's welcome everywhere except in one locked room. So where does she head straightaway when he heads off on business? With Dylan Baker, Matthew Beard; directed by Sebastian Gutierrez.

Til Death Do Us Part (PG-13, 1 hour, 41 minutes) A credible domestic drama in which Michael (Stephen Bishop) and Madison (Annie Ilonzeh), whose plan to spend the rest of their lives together, runs into trouble thanks to Michael's controlling ways. With Taye Diggs, Malik Yoba, Robinne Lee; directed by Chris Stokes.

Letter from Masanjia (not rated, 1 hour, 15 minutes) Relevant, taut, and intense, this documentary interpretation of globalization revolves around a frantic SOS letter written by a political prisoner, revealing frightful human rights situations in China, that surfaces in Halloween decorations sold in Oregon. Directed by Leon Lee.