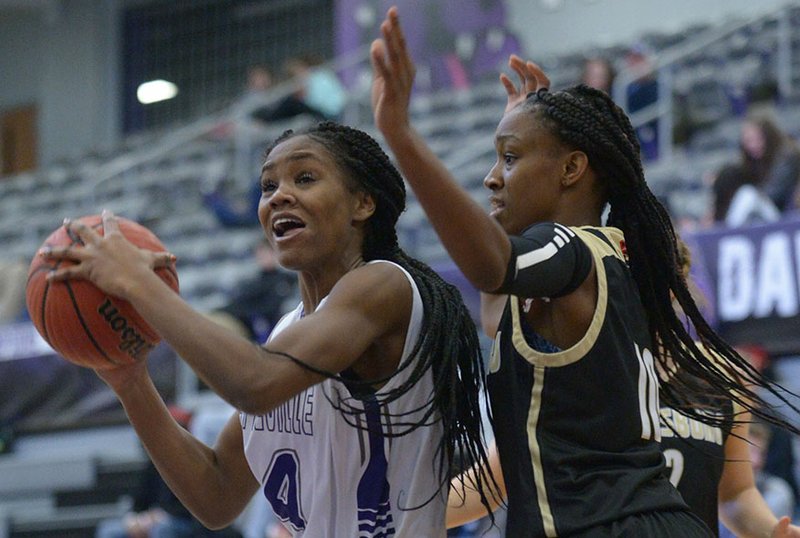 FAYETTEVILLE -- Claudia Bridges only had two baskets in Fayetteville's 59-39 win over Jonesboro on Friday night, but her second shot had her coach fired up.

"That's freaking strong," Fayetteville coach Vic Rimmer said as he found his starting point guard headed to the locker room at the half.

Bridges' buzzer-beater came off a layup as she was falling out-of-bounds, but those were the types of shots Rimmer was looking for from his team after the Lady Bulldogs struggled shooting from behind the arc early in the second round of the Fayetteville Bulldog Classic.

"Claudia, she has so much wiggle, that's what I call it, and she's able to do that," Rimmer said.

Bridges was one of nine Lady Bulldogs to score in the team's win while Sasha Goforth finished with a game-high 15 points and Coriah Beck added 14 to help lead the Lady Bulldogs' offense.

"Our bench is really good. We play three or four kids off the bench, and we don't miss a beat," Rimmer said.

Fayetteville was able to call on its depth to help overcome some poor shooting early on from star junior Goforth, who only had one shot through the first half. Goforth would heat up in the third quarter, scoring seven of her team's 13 points, and would score once more in the fourth before Rimmer took out most of the starters.

The Lady Bulldogs held Jonesboro to just one field goal during the third quarter, building off their lead it started forming in the second. The Hurricane missed some easy shots, but Fayetteville did a better job covering the gaps on defense, forcing Jonesboro to shoot outside shots compared to a game earlier this season, Rimmer said.

"Defensively, we are a little bit better than I thought," Rimmer said. "I've seen some a lot of mistakes in the first few games we've played, but tonight I think our focus was a lot better. I learned this team does have the ability to play good, sound man-to-man defense."

Jonesboro shot the ball well behind the arc, knocking down seven three-pointers on the night Destiny Salary had four of those six on her way to a team-high 14 points. Lakiya Scott added seven points off the bench.

In other games, Little Rock Central beat Jacksonville behind Ariyanna Hall and Lauryn Pendleton's combined 34 points while Shy Christopher had 22 for the Titans. Sapulpa had three players in double digits led by Temira Poindexter's 21 in its win over Hot Springs. Ally Sockey dropped a team-high 14 points in Greenwood's win over North Little Rock, which had De'myla Brown and Kennady Tucker each score 10 points.