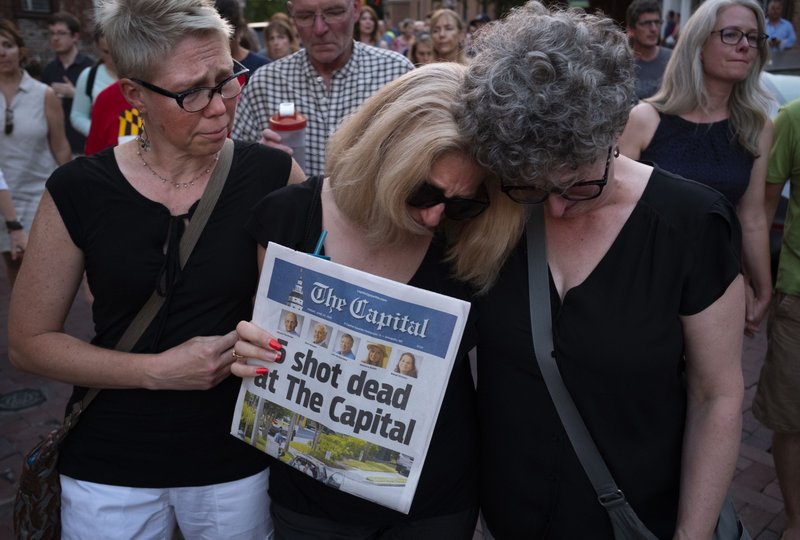 Andrea Chamblee, center, widow of reporter John McNamara, at a vigil in downtown Annapolis, Maryland, to honor the five journalists slain in the mass shooting at the Capital Gazette on June 29, 2018. With her are Cherie Baron, left, and sister Cindy Chamblee, who sang at John and Andrea's wedding.

It was not a good year for journalists.

From Burma to Annapolis, Md., reporters were harassed, arrested and even killed for doing their jobs. According to the Committee to Protect Journalists, 45 journalists were killed in 2018 because of their work. Reporters Without Borders put the figure slightly higher, saying more professional journalists were killed in connection with their work in the first nine months of 2018 than in all of 2017.

Conflict zones such as those in Afghanistan and Syria continue to be the deadliest places for journalists to work. But press-freedom groups warn of worsening conditions in places where a free press has been a pillar of civil society, including Mexico, parts of Europe and the United States.

"This has been one of the worst years of press freedom," said Courtney Radsch, the advocacy director for the Committee to Protect Journalists. "Over the past couple years, we've see a deterioration in the environment in which people work, both in terms of people in prison and journalists killed."

There are too many threats, arrests and killings to list, but there are four cases that set the tone in 2018.

Set up in Burma

Reuters journalists Wa Lone and Kyaw Soe Oo started the year in a Burmese prison. To the surprise and anger of many, they will end it there as well.

Despite testimony from another police official that they were set up, a court found the two men guilty of violating Burma's colonial-era Official Secrets Act and sentenced them to seven years in prison.

Foreign governments and human-rights groups condemned the outcome, saying the trial and sentencing signaled trouble for democracy in Burma. "The clear flaws in this case raise serious concerns about rule of law and judicial independence in Myanmar," the U.S. Embassy there said in a statement.

The case will have a chilling effect on journalism in Burma, Khin Maug Zaw, the jailed reporters' attorney, told The Washington Post. The message is, he said: "Hold your tongues, don't say anything, don't be inquisitive."

On the afternoon of June 28, a man burst into the offices of the Capital Gazette newspaper in Maryland's capital and opened fire, killing five people in what is believed to be the deadliest attack on U.S. journalists in decades.

It apparently was not a random shooting. The suspect, Jarrod Ramos, 38, had been harassing Gazette journalists since the paper ran a column noting that he was convicted of criminally harassing a woman. The harassment was so intense that the paper's former editor, Tom Marquardt, had previously wondered whether Ramos would eventually attack.

"I said during that time, 'This guy is crazy enough to come in and blow us all away,'" he told the Los Angeles Times.

In the aftermath of the killings, critics accused President Donald Trump of inciting the shooting by denouncing the news media. Writing in The Washington Post, media critic Margaret Sullivan cautioned against drawing a direct line between the president and Ramos. But she argued that the president's rhetoric is indeed having an effect on press freedom.

"Trump can't, and shouldn't, be blamed for the Annapolis massacre," she wrote. "But that doesn't make his contempt for the press any less dangerous."

The media scene that once thrived in post-Taliban Afghanistan is increasingly under attack.

On April 30, a suicide bomber riding a motorbike blew himself up in Kabul, not far from the U.S. Embassy. As journalists rushed to the scene, a second bomber, posing as a journalist, detonated his own device and killed 25 people, including nine reporters and photographers.

In a separate attack on the same day, Ahmad Shah, a reporter for the BBC, was fatally shot in Khost province. "This is the deadliest day for Afghan media in the past 15 years," Lotfullah Najafizada, the head of Afghanistan's Tolo News TV, told the BBC at the time.

He insisted that the violence would not break the resolve of the country's journalists. "We went, all of us, to the blast site," he said. "We said: 'If you killed an entire line of journalists reporting here, in five hours time we're back here; the line is longer; the queue is longer and the resolve is greater.'"

On Sept. 6, Samim Faramarz was reporting from the scene of a bombing in Kabul when a second explosion hit, cutting the broadcast and killing Faramarz and his cameraman, Ramiz Ahmady.

His last words were broadcast live: "The area is completely terrorized. I can smell blood here, and as you can see in the pictures. ..."

And then he, too, was gone.

On Oct. 2, Saudi journalist Jamal Khashoggi entered the Saudi Arabian consulate in Istanbul. He never emerged, and his disappearance -- along with the eventual confirmation that he had been killed -- sparked a monthslong diplomatic crisis that's still unfolding.

Initially Saudi Arabia denied any role in the killing or even that Khashoggi was dead. Over the ensuing weeks, however, the Saudis changed their story, eventually admitting that Khashoggi had been killed by "rogue" Saudi agents. They have since charged several men who were part of the alleged hit squad. Five of them face the death penalty.

But the Saudi account is increasingly at odds with evidence shared by Turkey, where Khashoggi was killed and dismembered. It is also contradicted by the CIA, which has concluded that Saudi Crown Prince Mohammed bin Salman ordered the killing.

Since the killing, the United States, Europe, Canada and others have warned of consequences but have not delivered much of a concrete response. President Trump has refused to blame Mohammed directly, preferring to talk up the value of Washington's relationship with (and arms sales to) Riyadh.

In his final column for The Washington Post, Khashoggi wrote about the need for press freedom in Saudi Arabia and across the region.

"The Arab world needs a modern version of the old transnational media so citizens can be informed about global events," he wrote. "Through the creation of an independent international forum, isolated from the influence of nationalist governments spreading hate through propaganda, ordinary people in the Arab world would be able to address the structural problems their societies face."

The piece was published on Oct. 17, 15 days after he was killed.