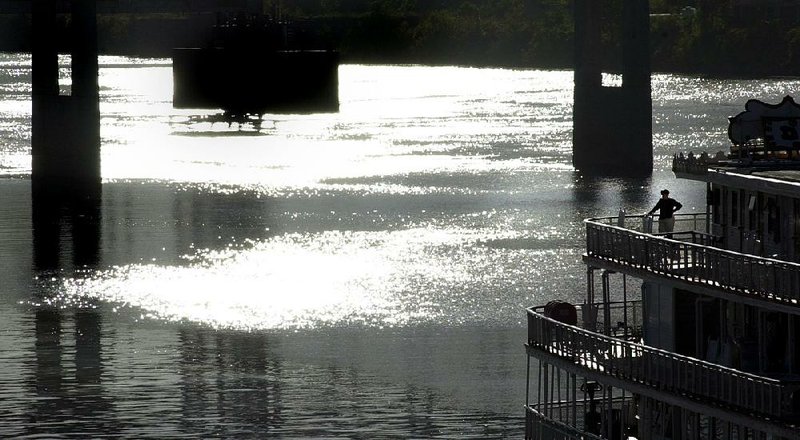 A passenger stands on the deck of the Delta Queen in 2001 as it sits at dock on the North Little Rock bank of the Arkansas River. The paddle-wheeler ceased overnight cruises in 2008 but could return to the water as early as 2020.

WASHINGTON -- Thanks to the White House, the Delta Queen steamboat is one step closer to returning to the Mississippi and Arkansas rivers.

President Donald Trump on Tuesday signed the Frank LoBiondo Coast Guard Authorization Act of 2018, which provides funding for that federal institution. Tucked inside is a provision exempting the Delta Queen from 1960s federal fire safety laws.

The ship ceased offering overnight cruises in 2008 after its last exemption to those laws expired.

Now the Delta Queen Steamboat Co. can focus on securing the $10 million to $12 million it will take to restore the 1920s-era ship and return it to the inland waterways.

The ship could return to the water as early as 2020, he added.

The Delta Queen has been a National Historic Landmark since 1989. In 2016, the National Trust for Historic Preservation placed the Delta Queen on its annual list of America's 11 Most Endangered Historic Places.

It is moored in Houma, La., southwest of New Orleans.

Officials with the National Trust for Historic Preservation had urged Trump last month to grant the exemption.

"The Delta Queen is the last of her kind -- our only remaining link to the sternwheel steamboats that plied our rivers centuries ago," said Stephanie Meeks, the group's president and CEO. "We are confident that she can again safely provide a unique and enriching overnight experience for current and future generations, while bringing new energy and revenue to the ports she visits along the way."

It would require the White House, the Capitol and other federal buildings to fly the POW banner whenever the U.S. flag is displayed.

The black-and-white banner features the silhouette of a prisoner of war with barbed wire and a guard tower behind him. It features the words "You are not forgotten."

The banner was created during the Vietnam War and is a reminder of not only the nation's prisoners of war but also its servicemen who are missing in action.

Cotton, a U.S. Army veteran who fought in Iraq and Afghanistan, credited Warren with getting the ball rolling in the Senate. When Warren asked for help, Cotton said he was happy to pitch in.

"I thought it was a nice gesture," the Dardanelle veteran said. "We still have tens of thousands of MIAs from wars throughout the 20th century. There's an entire agency in the Pentagon, with hundreds of professionals dedicated to bringing those MIAs or ... their remains home so we can have closure for their families."

The Prisoner of War/Missing in Action flag is "one small symbol, one everyday reminder" of the nation's commitment to bringing every service member home, Cotton said.

In a news release, Warren said she has family members who have served in the armed services.

"All three of my brothers served in the military, and I understand the sacrifices our service members and their families make to keep our country safe every single day," Warren said. "We must honor those who have served our nation courageously, including those who have not made it home. I am proud to introduce this bipartisan bill alongside Sen. Cotton to ensure that this important symbol honoring our brave men and women is proudly displayed with the American flag."

The measure is backed by the American Legion, the Veterans of Foreign Wars and other groups. Similar legislation was filed last year in the House.

U.S. Rep. French Hill spoke at the In Defense of Christians' fifth annual solidarity dinner Wednesday in Washington, calling on Egypt to protect its Coptic Christian population from harm.

In Defense of Christians is a nonpartisan organization calling for "the protection and preservation of Christians and Christianity in the Middle East through raising global awareness, mobilizing international support, and educating policymakers toward constructive international policies on their behalf."

Hill has introduced a resolution in Congress "expressing concern over attacks on Coptic Christians in Egypt." It has 54 sponsors.

There are millions of Copts in majority-Muslim Egypt. A substantial number of Copts also live in Sudan and Libya.

During his speech, the Republican from Little Rock praised Egyptian President Abdel-Fattah el-Sissi for his commitment to religious tolerance but said problems continue in some areas of the country.

"He continues to say and do the right things at the top level of the Egyptian government. He has a good relationship with the Coptic pope, attends Mass on multiple occasions, gets some churches reconstructed while constructing the largest Christian cathedral in the Middle East in the new administrative center outside Cairo and holding terrorists accountable for their atrocities, but there is more to do," Hill told the audience.

El-Sissi's message doesn't "trickle down to the rural areas of the country where the attacks against Christians are the most prevalent and the most violent," Hill added.

Hill urged Egypt to do more to protect religious liberty.

"If you attacked a Christian, if you destroy their churches, if you murder a Christian, the Egyptian government must hold you accountable for your actions in a court of law. This is justice under the law," Hill said.

After quoting from the book of Proverbs ("Evil men understand nothing of justice. but those who seek the Lord understand all"), Hill also quoted a passage from the Koran which states: "Let not the hatred of people swerve you away from justice."