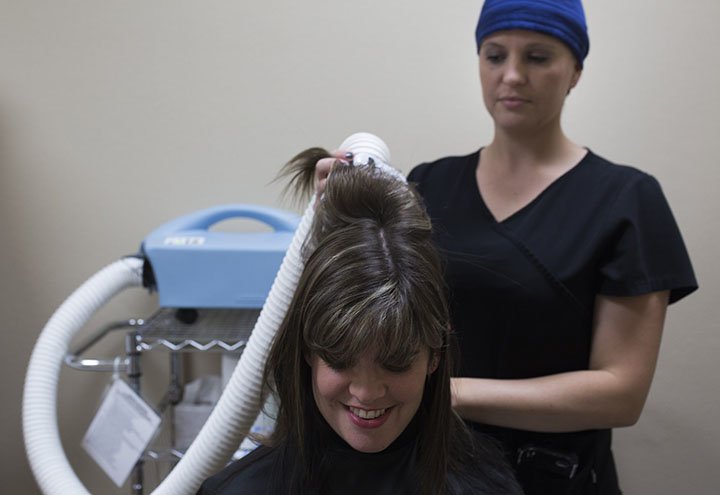 NWA Democrat-Gazette/CHARLIE KAIJO Stephanie Gann (right) demonstrates an airalle on Jessie Foley, director of clinics, Nov. 16 at the Lice Clinics of America in Lowell. The urgent care lice clinic opened in Lowell on May 1. The clinic uses a machine called an airalle that dehydrates the lice and eggs on a person's head. The procedure can be completed in about 90 minutes. Lice have evolved to become resistant to pesticides in the last 40 years. Their method omits the need for using chemicals to kill lice.

LOWELL -- Winter. The season for hats, scarves and hugging and taking photos with friends and family also beckons head lice.

The six-legged insects use the close contact to climb from one head to another and lay eggs, school nurses and lice treatment professionals said.

The Centers for Disease Control and Prevent recommends the following steps to help prevent and control the spread of head lice:

• Avoid head-to-head (hair-to-hair) contact during play and other activities at home, school and elsewhere.

• Do not share clothing such as hats, scarves, coats, sports uniforms, hair ribbons or barrettes.

• Do not share combs, brushes or towels. Disinfest combs and brushes used by an infested person by soaking them in hot water (at least 130°F) for 5–10 minutes.

• Do not lie on beds, couches, pillows, carpets or stuffed animals that have recently been in contact with an infested person.

• Machine wash and dry clothing, bed linens and other items that an infested person wore or used during the two days before treatment using the hot water (130°F) laundry cycle and the high heat drying cycle. Clothing and items that are not washable can be dry-cleaned or sealed in a plastic bag and stored for two weeks.

• Vacuum the floor and furniture, particularly where the infested person sat or lay. However, spending much time and money on housecleaning activities is not necessary to avoid reinfestation by lice or nits that may have fallen off the head or crawled onto furniture or clothing.

• Do not use fumigant sprays or fogs; they are not necessary to control head lice and can be toxic if inhaled or absorbed through the skin.

Head lice are easier to get than to get rid of, said Wade Huntsman, owner of Lice Clinics of America in Lowell.

"If they've got hair to climb onto, they'll climb on, and once they're in, they're in," he said. "They'll get down to your scalp and start eating and start laying eggs almost immediately."

Head lice are parasitic insects that feed on human blood, according to the federal Centers for Disease Control. The insects are not known to transmit disease, but scratching because of lice can cause bacterial infection. An estimated 6 million to 12 million infestations occur each year in the United States among children 3 to 11 years old, according to the centers. A lice egg is called a nit.

Infestations can keep children out of school and force parents to spend hours going through hair to get all the bugs and eggs. Huntsman said his clinic gives sufferers another option. He and Jessie Foley, director of clinics for Lice Clinics of America, know what to expect when a parent calls to make an appointment. They hear, "My house is so clean." and "How much is this going to cost?"

Parents have typically spent weeks picking, combing and washing, often to the dismay of children who do not want to sit still, he said. Sometimes, parents come into the clinic in tears, and sometimes, they have caught lice from their kids and need to be treated themselves.

"It's not about being dirty," Huntsman said. "It's just a very challenging thing to get rid of once you have it."

The clinic sees more girls than boys because girls typically have longer hair, making them more susceptible to lice, he said. Kids who are involved in activities such as sports, youth groups or summer camps tend to get lice more often. Adults who work with kids, such as teachers or daycare workers, are more likely to get head lice.

Head lice usually comes in spurts at schools, said Kathy Launder, director of nurses for the Springdale School District. She sees more infestations during winter. Head lice is mostly an inconvenience because it does not make people sick, but it's a sensitive topic for kids and parents, she said.

"They don't want to make a big production of it," Launder said.

Students are sent home if they have lice and parents are told about treatment options, she said. The district has no written policy, she said.

"Our lice guideline is that any student with lice must be treated with an approved lice shampoo and have all nits removed before returning to school," said Ashley Siwiec, communications director at Rogers Public Schools.

The district does not require or recommend a specific treatment, Siwiec said in an email.

Students at Fayetteville public schools are allowed to stay at school if they have nits in their hair, but not if they have lice, said Melissa Thomas, director of health services. The students' parents are notified if the nurse checks their head and finds nits or lice. The district reminds teachers, students and parents not to share hats or scarves and to check heads for lice.

"It's always the balance between, 'Do I need to write you a prescription drug?' versus 'Do you just need to do the aggressive combing and treatment at home?" he said.

Koehler said over-the-counter treatments, such as Nix, often work for people with lice.

"The unfortunate thing is we are seeing a little more resistance to that," he said.

Treatment typically involves washing the infested person's hair with prescription or over-the-counter shampoo and having someone comb and pick out nits. Koehler said sometimes parents are not putting in enough time or effort into the combing to get rid of the lice. There are no shortcuts -- all the lice and nits have to go -- and if one stays, families will likely have to deal with it for another week or more, he said.

"It's a big pain in the bottom to do it because you really need to comb out the hair completely and, unfortunately, the little fine tooth combs that you get over the counter -- a lot of them don't work very well -- and you still have to actually pick the nits out," he said.

Frustrated parents sometimes turn to home remedies to get rid of head lice, including vinegar, olive oil and petroleum jelly.

"We still get people who are putting mayonnaise on people's heads," Huntsman said. "Yeah, mayonnaise actually will kill the bigger bugs. It suffocates them basically, but it won't kill the eggs, so unless you comb every single egg out, you're right back where you started."

Huntsman said his lice clinic provides another option for people who have not been successful with the traditional treatments or those who would simply prefer to get rid of head lice in about an hour and a half instead of days or weeks.

The clinic uses a device, AirAllé, directly on a person's head for about 30 minutes and combs out the dead bugs and eggs. AirAllé is a one-and-done treatment, meaning all the lice and eggs should be gone after one visit to the clinic and no more treatment should be needed at home, he said.

"Basically, what the device does is it dries all the eggs out, and it dries out the bugs," Huntsman said.

The clinic, at 207 E. Monroe Ave., Suite D in Lowell, opened in May and is the Utah-based company's second Arkansas office. The other one is in Cabot.

Koehler said he is not opposed to recommending the lice clinic to families who can afford it and/or would rather have it taken care of faster than treating it at home. A treatment at the lice clinic costs $175. The clinic gives clients statements for their insurance companies because some will reimburse, Huntsman said.

"We do not contract with Lice Clinics of America, but it is possible that these clinics have licensed providers who provide services that are part of our network," she said.

Clinic staff met with several school nurses in the area and told them what they offer. For some, the clinic is not an option because of the price or transportation, said Thomas, with the Fayetteville school district.

Stephanie Gann, a treatment technician at Lice Clinics of America, said sometimes the clinic is a last resort because parents have tried everything and start looking for other options. In those cases, kids are usually glad by the end because they know they do not have to sit while someone combs and picks through their hair anymore. Other times, parents find out about the clinic and immediately make an appointment, she said.

"There are parents who don't know what they're dealing with and would much rather have a professional deal with it," she said.