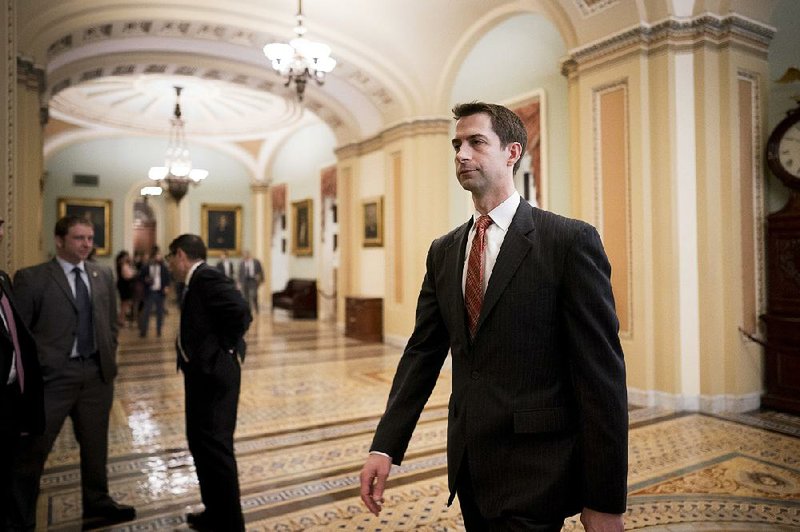 At a Capitol Hill news conference, they urged him to support the First Step Act, which would shorten some federal criminal penalties and give judges greater leeway when sentencing certain offenders.

A Senate vote on the legislation, which addresses only federal offenses, is expected next week. President Donald Trump has urged lawmakers to pass the bill.

Doug Deason, a Texas philanthropist and major Republican donor, said he knows and respects Cotton, but is baffled by the senator's stance.

"We've talked about this, and he's just wrong. It's embarrassing that he's taken that position, and I'm afraid for him that he's going to suffer at the polls during his [2020] primary [Senate campaign] because this is going to be held against him," the Rogers native said.

The First Step Act's supporters have more credibility than its opponents, Safavian said.

Tim Head, executive director of the Faith and Freedom Coalition, said the strategies have already been implemented in conservative states and have been effective.

The legislation is a mainstream conservative proposal, he said.

An earlier version of the bill sailed through the House, 360-59. Most of the opposition came from Democrats.

"Every Republican except for two in the House voted for this bill. ... Basically three-quarters of the Senate Republican caucus are in favor of this bill. We have a few people that still are waiting for the memo," he said.

"I have lost three members of my family to homicide. A 29-year-old brother; 17-year-old niece; 23-year-old nephew. And two others were violently assaulted and survived. So with that in mind, there's no way I'm lenient on crime. I'm law and order, but I'm also for effective law enforcement and effective punishment," said Woodson, a former American Enterprise Institute fellow and MacArthur Fellows "genius grant" recipient.

In an August Wall Street Journal editorial, Cotton labeled an earlier version of the First Step Act as a "jailbreak," warning that "the U.S. faces a drug epidemic today, exactly the wrong time to go soft on crime."

In an interview with the Arkansas Democrat-Gazette last month, Cotton argued that the United States has an "under-incarceration problem" and labeled the First Step Act a "criminal leniency bill."

His office did not respond Thursday afternoon to the comments made at the news conference.

If the First Step Act is approved, people imprisoned under the three-strikes law would no longer face automatic life sentences; instead they would face 25 years in prison. Certain drug offenses that carry automatic 20-year sentences would now result in 15-year sentences.

It would also make retroactive a 2010 law that reduced the disparity between powder-cocaine and crack-cocaine-related convictions.

In addition, the proposed legislation would expand supervised early-release programs for low-risk prisoners, enabling well-behaved inmates to get credit for enlisting in job-training programs, among other things, supporters say.

The 149-page draft piece of legislation exempts dozens of categories of crimes from early-release programs. It includes several that were added after Cotton objected to their omission from the list.

The legislation mandates screening, upon admission, for inmates with learning disabilities. It also requires de-escalation training to help corrections officers respond to inmates with mental illnesses or cognitive impairment.

As of Thursday, the federal inmate population stood at 180,789, according to the Federal Bureau of Prisons. That's a fraction of the 2.16 million people who were incarcerated on the local, state and national level as of Dec. 31, 2016, according to the U.S. Department of Justice.

The federal prison system has grown rapidly over the past four decades. In 1980, it housed roughly 25,000 offenders.

Nearly half of all federal inmates -- 46 percent -- are locked up because of drug offenses. Eighteen percent were incarcerated after committing weapons, explosives or arson-related crimes. Roughly 10 percent are sex offenders, according to the latest bureau statistics.

The bill has been revised since Cotton began addressing concerns.

Next week, the Senate is scheduled to debate and vote upon three amendments that have been offered by Cotton and U.S. Sen. John Kennedy, R-La.

One would prevent federal inmates from participating in the early supervised release program if they've been convicted of any of nine crimes, including assaulting a law enforcement officer, hate crimes or assisting federal prisoners with jailbreaks. Dozens of other crimes are already listed.

Another would require prison wardens to notify victims "before an offender is transferred early into prerelease custody or supervised release."

The third amendment calls for the bureau to track rearrest data for prisoners who participate in the program.

In a written statement, Cotton said the First Step Act is evolving but that additional changes are needed.

"For months I've argued that the First Step Act did not go far enough in protecting victims and preventing serious felons from being eligible for early release. I'm glad the bill changed to address some of my concerns, and I hope my amendments can pass to ensure that no violent felons will be released early."