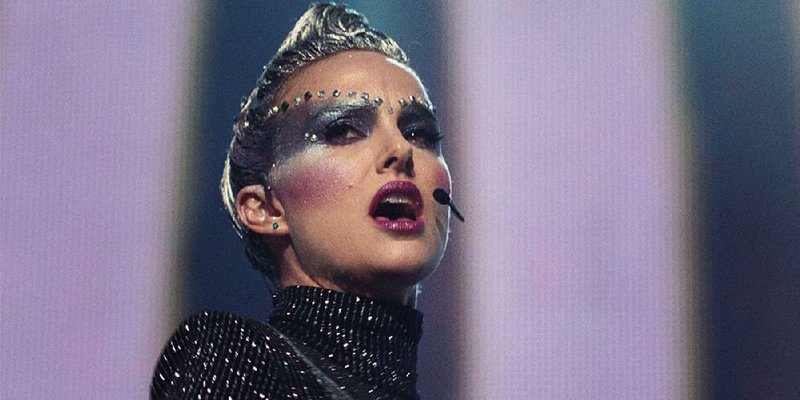 Celeste (Natalie Portman) is a Lady Gaga/Madonna-style pop star trying to stage a comeback in Brady Corbet’s Vox Lux, a meditation on celebrity and its costs.

Some people -- no names here -- see life as a strictly transactional matter. What some of us attribute to vague things like love and fortune, they analyze for cause and effect. Your dog loves you because you feed it. You love it because it's a member of a species that has over hundreds of thousands of years evolved complex strategies for courting human affection. Or, as my wife says, if dogs looked like lobsters, we wouldn't love them.

But we could love lobsters, couldn't we? For sometimes we do. We fall into parasocial relationships with celebrities who don't know us and would have nothing but disdain for us if they did. We adopt style icons and intellectual mascots; we follow their reality show arc through online gossip sites and in the pages of mainstream newspapers. As the subject of Bohemian Rhapsody sang, we give them fame, fortune and everything that goes with it. What do they give us? Their thanks, their art, their example?

Rating: R, for language, some strong violence, and drug content

Whatever it is, a lot of people are willing to make the bargain.

In actor-turned-director Brady Corbet's not-entirely-coherent Vox Lux (the Latin translates to "voice of light," which sounds like a Madonna album, which is the point) a rather ordinary American schoolgirl is transmuted through tragedy into a hideously empty pop music icon. It is a film of interesting textures and gestural feints toward a meaning I'm not sure is quite there. It is something to look at, and smart about our communal longing for pretty stupor and the way we think (when we think) about pop culture, but there's something essential missing at its core.

It starts in 1999, in a Staten Island high school band room with a disaffected teenager with a gun. He dispatches the teacher, commands the others to stand against a wall, when 14-year-old Celeste (Raffey Cassidy) tries to negotiate with him. Maybe she's the only popular kid who's always been nice to him, maybe she was a special object of his attention, but in any case it's clear she's doing something brave, and that even in this fraught moment she retains some empathy for her murderous classmate. It's to no avail; he slaughters some of his classmates, then himself.

Celeste survives but is shot in the neck, a life-threatening injury from which, it is suggested, she never completely recovers. With the help of her older sister Ellie (Stacy Martin) she composes a turgid song they perform at a vigil for the victims. The vigil is televised, and despite Celeste's modest musical gifts she becomes marked for stardom, taken under the wing of a hard-charging manager (Jude Law). In short order, she's whisked off to Stockholm to meet with a pop music Svengali who, we are told, is genuinely energized by the opportunity to work with innocents like Celeste and Ellie.

(In an amusing aside, the film's sardonic narrator, Willem Dafoe, attributes the Swedish dominance in modern electronic pop music to Nordic anxiety over the dark lures of jazz that was emerging from America after the Second World War. I have no idea whether that's accurate, but it's an interesting explanation for why ABBA happened.)

Celeste loses her virginity to a gritty British rocker who, she says, makes "the sort of music the boy who shot me used to listen to," as opposed to the sort of music she wants to make. "I don't want people to think too much," she pillow talks. "I just want them to feel good."

She makes a video and is propelled into bedazzled pop stardom. Ellie assumes a background role, writing her songs.

We jump ahead to 2017, when a 31-year-old Celeste (now played by Natalie Portman) is preparing for a comeback tour and album. On the morning before her big kickoff concert -- being held in her hometown -- comes word that terrorists in Croatia have machine-gunned vacationers to death on a Mediterranean beach. They were wearing masks like those featured in one of Celeste's videos.

The only response is to deny that the attack had anything to do with the pop star, that the masks might have been random and if they weren't, well, crazy people will always get their ideas from somewhere. Besides, adult Celeste has a lot on her plate, scandals to out-cycle, and a relationship with her 17-year-old daughter Albertine (also played by Cassidy) to repair.

Grown-up Celeste is a cliche, a toxic narcissist with a gratitude deficit and a screechy New Yawk accent. She's a cipher who has appropriated her scars as trademarks -- her neck is strapped in glitz, an echo of the bandage she wore after the attack.

And she's a bad artist, banal and derivative. When she performs, her voice is digitized into empty perfection. Her sister is the chief creative engine. Celeste can talk a good game but she knows and admits that it really doesn't matter what kind of music she makes anymore, her fans will support her. She's a cult leader.

Portman's performance is brave and hard to watch. She never signals that she's in on the joke. But she must be, for the songs she performs -- in real time during the final act -- are really bad, and her dance moves only athletically impressive. Credit songwriters Sia and Greg Kurstin who worked to create these songs with enough self-awareness to make them plausible but sparkless: They have to go back to working in the industry they just lampooned.

It's something to watch, though the Faustian bargain implied feels too pat. Goethe's doctor didn't wager his soul for fame and wealth, he traded it for meaning. Robert Johnson didn't get celebrity; he settled for simple genius. What did Celeste get for her innocence? PTSD and sequestration -- the cold, remote luminescence of a star. 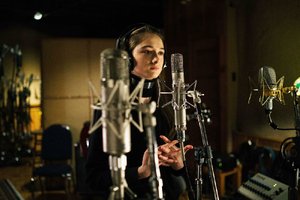 The young Celeste (Raffey Cassidy) rises to stardom after surviving a school shooting in Vox Lux.