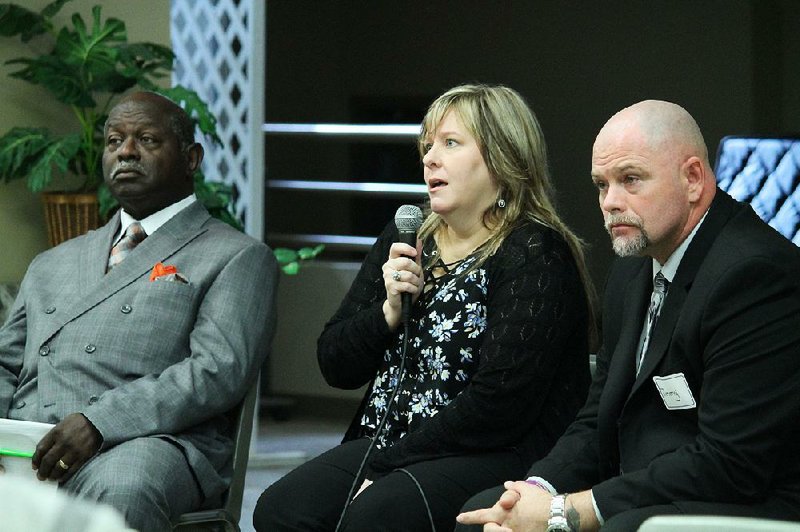 Suzanne Tipton (center) speaks to faith leaders as a panel member at the Interfaith Arkansas annual gathering “Faith Community Responds to the Opioid Epidemic,” along with the Rev. William Gibbons (left), a discipleship pastor at St. John Missionary Baptist Church; and Jimmy McGill, a substance abuse peer recovery specialist, on Nov. 8 at Second Baptist Church in Little Rock. Along with the state Health Department and the Clinton Foundation, the faith community is partnering to combat the opioid epidemic in Arkansas.

Little Rock area faith leaders have partnered with the Bill, Hillary and Chelsea Clinton Foundation, the state Department of Health and Interfaith Arkansas to help fight the opioid epidemic in Arkansas.

The partnership is a component of the continued work by the foundation's Clinton Health Matters Initiative to help faith leaders build a knowledge base and familiarity about opioid abuse -- a topic that isn't always openly discussed in houses of worship -- and how to address the issue in ways that encourage open discussion and facilitate substance abuse resources if needed.

The partnership, which began in October, comes after the Clinton Foundation had been successful in helping to implement the program with faith leaders and area resources in Houston -- and against a backdrop of rising opioid use and abuse in the United States.

During a Nov. 8 meeting for the initiative, Arkansas drug director Kirk Lane spoke of the Centers for Disease Control and Prevention statistic that more than 72,000 people died of a drug overdose in the United States in 2017.

"That's 198 people a day," Lane said. "One hundred and ninety-eight people is about the capacity of a large jet liner, crashing every day. How long would it take the rest of us to shut the airline down?"

According to Arkansas data from the center, there were 105.4 opioid prescriptions per every 100 people -- nearly double the national average of 58.7 prescriptions.

The center also released a report on Wednesday finding fentanyl, a synthetic painkiller, to be the top drug responsible for overdoses in the United States.

"Clearly, we as a nation have a problem dealing with pain, whether that's physical pain, emotional pain, pure spiritual pain," said Chris Thrasher, senior director of Substance Use Disorders and Recovery at the Clinton Foundation, at the Nov. 8 gathering. "We are not good with pain. And we live in a society and a culture that has a pill for everything."

Around two dozen faith leaders attended the event at Little Rock's Second Baptist Church, a follow-up from an introductory meeting with the Clinton Foundation in October.

"I look in this room, and know the problem that we're having, and honestly, we ought to fill the room," said Lane of faith leaders. "[We] ought to be outside on the sidewalk."

Lane said although there are drug take-back programs, programs through UAMS for educating doctors about prescribing habits and other resources such as peer recovery programs now available, there is still a stigma that can surround substance addiction, and he emphasized the need to see the issue as an illness that's treatable.

"I've seen faith-based communities in towns that I've worked with in my career that have turned away from this, because of the stigma that's attached to it," Lane said. "When a family finds out they don't want [their churches] to know, and it affects our data -- and our church -- because sometimes we don't want our kids to be around these people who are fighting this battle.

"We need to understand that it's a disease."

Suzanne Tipton, who lost her 23-year-old son, Nicholas Kellar, to an opioid overdose on April 14 last year -- Good Friday -- said as a member of a panel discussion at the Nov. 8 gathering that she still has "unresolved issues" with the faith community as a result of how it responded to his struggles with addiction.

"He was in church practically every time the doors were open," said Tipton of Kellar as a child. "I don't know anyone that didn't love him."

Kellar, who attended a Baptist school growing up, seemed to lose his self-confidence after entering his teen years, Tipton said. He also struggled with an immune disorder for years, "surrounded by people who were doing all the 'right things,'" and started taking drugs when he was around 14 years old.

"[Kellar] was a golden boy in the choir -- he did a whole show himself when he was probably 9 or 10," Tipton said. "But boy, when he started having problems, and ... he didn't fit that cookie cutter image anymore, and 'that might just rub off on us,' he was quietly, politely ostracized."

Kellar had been drug free for two years when he overdosed, and Tipton said she has been speaking out about his death to raise awareness about the opioid epidemic. She called for faith leaders to be proactive in their churches and implement programs like peer recovery, a program that she said might have helped her son.

"You have to be the ones that are reaching out," Tipton said. "You have to smack the congregations upside the head. You have to be able to ... get them to resources, and not worry about whether it's going to rub off on your kid or rub off on your family or your church. If [Kellar had] had a group or peer recovery person or someone who knew what he was going through, he might have had a chance.

"All of you ... have that chance, to provide that to somebody."

The Clinton Foundation has been at work against the opioid crisis since 2012, according to Calondra McArthur, a spokesman for the Clinton Foundation in New York. "President Clinton worked early on to mobilize resource and attention to this crisis, as several of his friends have lost family members due to overdoses," McArthur said in an email.

That work has included increasing access to Naxolone, the medication that binds with opioid receptors in the body to reverse the effects of an overdose, and engaging community members about the topic of opioids -- something that Thrasher admitted is a challenge.

"It's not an easy thing, but it is doable, and it starts with each one of us as individuals -- faith leaders, members of our congregations -- taking a deep breath and saying, 'I'm going to have the conversation,'" Thrasher said. "'I'm going to start with it, and I'm going to just do it.'"

The Rev. Steve Copley, executive director of Interfaith Arkansas, said last week that faith leaders are in the planning stages for additional events for the initiative, which he said at the gathering was "an exciting move."

"Interfaith work is very, very important and oftentimes we don't realize it until we're in a catastrophic situation," Copley said. "And so any time I could partner with faith leaders and city leaders on any work that matters in peoples' lives, I want to be a part of that."