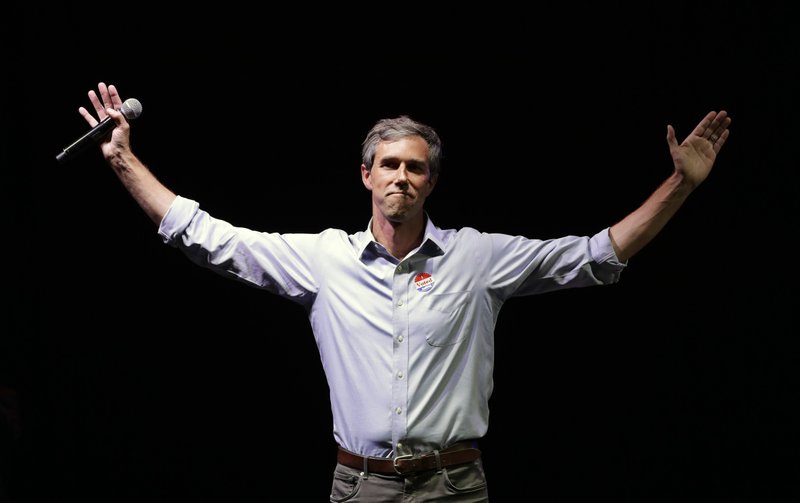 FILE - In this Nov. 6, 2018, file photo, Rep. Beto O'Rourke, D-Texas, the 2018 Democratic candidate for U.S. Senate in Texas, makes his concession speech at his election night party in El Paso, Texas. When it comes to a 2020 presidential run, Beto O'Rourke is still playing hard to get. The Democratic congressman murmured &quot;No decision. No decision on that,&quot; when pressed about launching a White House bid during a town hall Friday, Dec. 14 in his native El Paso. (AP Photo/Eric Gay, File)

AUSTIN, Texas -- Rep. Beto O'Rourke and four other Democratic members of Congress on Saturday toured a remote tent city in West Texas where they said that 2,700 migrant teens are being held at a cost of roughly $1 million per day.

The lawmakers urged the nonprofit running the facility not to renew a federal contract that expires Dec. 31, a longshot request that could effectively shutter the camp. It was supposed to be temporary but has instead taken in more children and taken on a permanent feel with soccer fields, a dining facility and tents housing separate sleeping quarters for boys and girls.

O'Rourke, of Texas, was joined by U.S. Sens. Mazie Hirono of Hawaii, Jeff Merkley of Oregon and Tina Smith of Minnesota, and by Rep. Judy Chu of California.

O'Rourke said he and his colleagues weren't allowed to speak to the children in any meaningful way.

"They kind of nodded their heads, but what are they going to say when everyone around them is watching?" O'Rourke said after touring the facility. "But there was something in the look on their faces that we saw, the way that they weren't really engaged in the sports that they were playing out on those fields."

"We need to shut it down," Chu added. "It is inhumane. It is a child prison. It has no right to exist."

After making his fourth visit to the camp just outside Tornillo, O'Rourke noted the area was about an hour's drive from his native El Paso, which borders Mexico at the westernmost tip of Texas.

"It's in a remote location on purpose so that the American people do not know what's happening here," O'Rourke told reporters.

The lawmakers said 2,700 boys and girls between the ages of 13 and 17 were being held at Tornillo. They described touring the tents housing the teens but said they could only ask light questions. O'Rourke said he asked a few of them what countries they were from -- Guatemala and Honduras, they said -- and received assurances that the conditions were "OK."

Tornillo opened as a temporary facility in June, amid what President Donald Trump's administration described as an emergency situation on the U.S.-Mexico border. Since then, the contract keeping it open has been renewed, and the numbers of kids being held inside has grown, though determining how fast and by how much has proved difficult.

The lawmakers said the contractor running the facility, BCFS Health and Human Services, told them that the tent city has cost taxpayers $144 million since opening, or about $1 million a day.

The Democrats said they urged BCFS Health and Human Services to refuse to renew its contract with the U.S. government. But the lawmakers said that even if that happened, they weren't sure where the children being held at Tornillo would be transferred as a result.

O'Rourke said Saturday that the contractor told him that a recent agreement with Texas now allows for state background checks, but that the facility still doesn't have the capacity to do FBI fingerprint checks.

The lawmakers said many of the teens have family members already in the United States who would like to take them. But federal authorities have begun fingerprinting and conducting background checks on would-be "sponsors," resulting in 170 apprehensions on possible immigration violations.

They also said that even with the added scrutiny, the contractor said 1,300 children have relatives ready to take them but have remained at Tornillo due to unexplained federal delays.

O'Rourke said public pressure could force federal authorities to close Tornillo, but in the meantime federal policies mean the country is "turning our backs on these people."