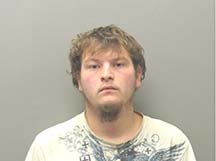 A former Hot Springs man was sentenced to 25 years in prison Monday after pleading guilty in Garland County Circuit Court to having repeated sexual relations with a 13-year-old girl last year that resulted in her pregnancy.

Joel Clark Wilt, 27, who listed a Wichita, Kan., address at the time of his arrest, was set to stand trial Monday, but opted to plead guilty to a felony charge of rape, punishable by up to life in prison. He has remained in custody since his arrest Oct. 31, 2017, and will be given credit for time served. He was also ordered to pay $420 in court costs upon his release.

Chief Deputy Prosecuting Attorney Joe Graham said Tuesday the victim and her parents authorized the plea deal in the case. He said he had previously offered the same deal to Wilt and it was turned down, but Monday morning Wilt's attorney came to him and "asked if we would still let him take the 25."

"I checked with the victim and her parents and they said they were willing to go with that offer," he said.

According to the probable cause affidavit, on June 8, 2017, Hot Springs police Detective Kenny May was contacted by the Arkansas State Police Crimes Against Children Division regarding a Child Abuse Hotline report that involved sexual relations between a then 25-year-old man, identified as Wilt, and a 13-year-old girl.

The report was called in by a third party and both Wilt and the victim initially denied having sex.

On July 26, May received a fax from Planned Parenthood in Arizona stating the victim had been seen at its Glendale clinic on July 20. The fax noted the victim was pregnant, and there were concerns about her having a sexual relationship with an adult.

On Aug. 9, May received a fax from the Department of Children and Family Services in Los Angeles. The fax stated the victim had received an abortion at a clinic within the county. She also disclosed that she had begun dating Wilt five months beforehand, and her pregnancy was the result of their relationship.

On Aug. 14, the victim's mother showed May conversations between Wilt and the victim on the victim's cellphone, including numerous Facebook messages between the two from July where Wilt called the victim "cute and sexy baby" and told her "I love you so much too baby."

On Sept. 13, May reviewed a disc provided by state police that included a phone conversation between Arkansas State Police Investigator Kathy Finnegan and the victim recorded Aug. 10. In the phone conversation, the victim informed Finnegan she had an abortion the day before, and Wilt was the father. She said Wilt had told her to take 6,000 mg of vitamin C each day to induce a miscarriage.

The victim came to the Hot Springs Police Department on Sept. 26 and told May she had met Wilt in late 2016. She said she began having sex with Wilt in March 2017, when she was 13.

May received the victim's pregnancy results from Planned Parenthood on Sept. 26, which showed the estimated date of conception was May 5, shortly before the victim's 14th birthday.

A nationwide extradition warrant was issued for Wilt on the rape charge and he was featured on social media and in the newspaper on Oct. 12, 2017, seeking the public's help in locating him. At the time, police believed he might be in the Fort Smith area or "with family out of state."

On May 1, 2018, the findings of the evaluation, which determined Wilt was fit to proceed with trial, were issued in circuit court and accepted by Wilt's attorney although Wilt indicated he planned to continue to claim he was not guilty by reason of mental disease or defect at trial.