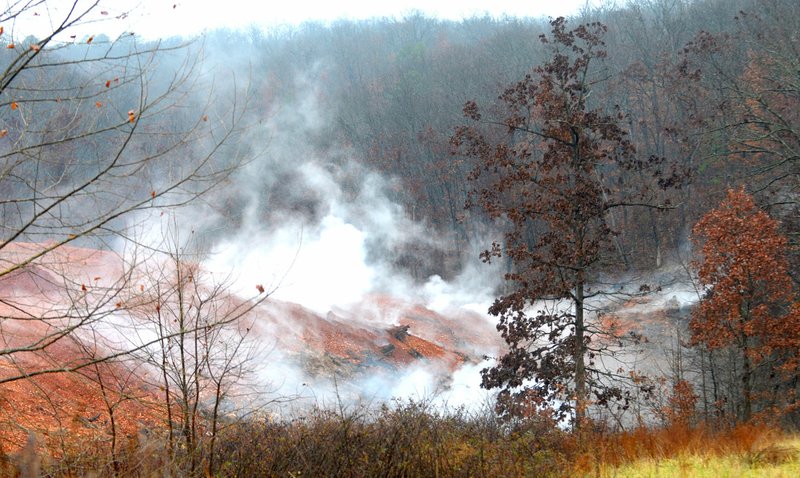 NWA Democrat-Gazette/DAVID GOTTSCHALK Smoke rises Friday, Dec. 14, from an underground fire at the former "stump dump" site on Trafalgar Road in Bella Vista. The site was once a Bella Vista Property Owners Association "stump dump" at which residents of the city could dump yard waste.

BELLA VISTA — The state will help pay to put out an underground fire that has burned since July in Northwest Arkansas, Gov. Asa Hutchinson announced.

Hutchinson said in a news release he met with directors at the Arkansas Department of Environmental Quality and the Department of Health on Thursday to discuss, "the serious nature of the Bella Vista fire situation."

"As a result of the meeting, I directed ADEQ to contract with an engineering firm to prepare a plan for removing or eliminating the hazardous waste fire and dump. This is an expensive project, and I have approved necessary funds for the engineering work.

"Additional funds and expertise will be needed to eliminate the hazard. I am committed to a solution that works as quickly and as safely as possible," the release stated.

The release did not say how much extinguishing the fire is expected to cost.

Chelsea O'Kelley, deputy director of communications for the governor, said Hutchison would visit the site soon.

The fire is located at a stump dump on Trafalgar Road that was used by the Bella Vista Property Owners Association for 13 years. The property is now owned by Brown's Tree Care.

Mayor Peter Christie could not be reached for comment. A cellphone voice mail message said he was out of the office until Jan. 2.

Fire Chief Steve Sims previously said firefighters were initially dispatched to the area July 29, where they spotted smoke and what appeared to be the remains of a brush fire. There were no controlled burns listed in the dispatch log, he said, and the property owner denies burning brush.

Tom Judson, the Property Owners Association's chief operating officer, previously said the association operated the stump dump on leased land starting December 2003 until the end of 2016 when the dump was covered with soil.

Judson said nobody monitored the site the last few years it was open, but staff would remove trash when possible.

The Arkansas Department of Health said Dec. 12 preliminary results of monitoring near the fire showed air quality in the "unhealthy" category, according to a news release. Everyone within a half-mile radius of the 8000 block of Trafalgar Road was cautioned to avoid prolonged or heavy exertion outdoors.

Cassi Lapp with the city said last week EPA testing showed the fire was burning as hot as 800 degrees in some places. Fire Department personnel have said the fire may be burning more than 50 or 60 feet underground.

The federal Environmental Protection Agency did air quality testing along Trafalgar Road last week. The testing, called particulate matter monitoring, measures the amount of solid and liquid droplets found in the air such as ash, dust and smoke. The amount of particulate matter in the air provides a snapshot of air quality and how it may affect health, according to the state Health Department.

The EPA collected 24-hour air samples from five locations around the tree care property Oct. 1 and Nov. 10. The agency tested for hundreds of chemicals associated with landfill fires potentially containing construction debris, household waste or tires. None of the air samples showed elevated concentrations of chemicals of concern in the community, according to the EPA.

The EPA also collected samples from the property and found a low level of benzene Nov. 10, according to an EPA release. The American Cancer Society says benzene is a colorless, flammable liquid with a sweet odor and it evaporates quickly when exposed to air. The chemical is a natural part of crude oil and gasoline, as well as detergents, drugs and pesticides.

Stuart Spencer, associate director of the office of air quality at the Arkansas Department of Environmental Quality, told residents at a Dec. 1 meeting benzene suggests there's trash in the former dump and not just yard waste.

Curtis and Tiffany Macomber, who live near the dump site, have sued Brown's Tree Care and John Does 1-3 in connection with the fire. The lawsuit was filed in Benton County Circuit Court. It claims continued smoke from the site has created a hazardous situation for the Macombers and their children.