Vice paints Cheney as an unassuming wonk with power to pull strings by Philip Martin | December 21, 2018 at 1:50 a.m. 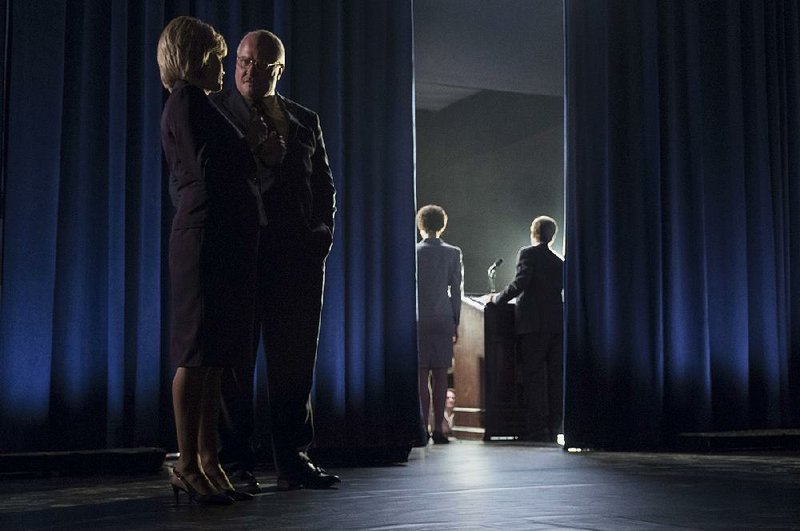 Lynne (Amy Adams) and Dick Cheney (Christian Bale) convene behind the scenes in a scene from Adam McKay’s Vice, a remarkably entertaining study of the rise of an unlikely power.

Seriously, not in the way we sometimes casually announce we hate a TV personality, pop-up ads or "The Little Drummer Boy." For them, Cheney -- who, while serving under George W. Bush, became the most powerful vice president in U.S. history -- is a treacherous and appalling figure, an unrelievedly vile and cynical apparatchik. Whether or not they are justified in this opinion let us leave aside for now. Just know that for them, Cheney is an utter villain, an Iago whose intrigues cynically risked the very soul of America.

Rating: R, for violence, language and some sexual content/ nudity

When he left office, Cheney's approval rating was only 13 percent, about a third of the rating of the current polarizing figure in the White House. Yet one can imagine that there are others for whom he seems, if not precisely a hero, at least an indispensable man -- of those few people who marshal history and, to echo an opinion expressed as a dissent near the end of Adam McKay's Vice, did things that needed to be done.

For the rest of us, Dick Cheney is a cipher. An unassuming, gray Washington type, a bureaucrat who made his way by allowing more charismatic and less clever people to hog the spotlight. Cheney presented as an example of what some people call the "deep state," part of the army of gray wonks who really run things. Someone we caught a glimpse of in the instant the curtains flutter open ....

Whatever your view of Cheney, Christian Bale's impersonation of him in Vice is almost certain to supplant it. Bale's Cheney has the advantage (which the real Cheney would see as disadvantage) of being projected onscreen, of being presented as a fit subject for our wonder. In real life Cheney thrived, at least in part, because of his talent for opacity.

But here, Bale -- a former Batman -- disappears into a slump of grandfatherly flesh. He's mastered Cheney's lip curl, a curiously Elvisian gesture, and the impatient nodding of his head. The transformation is so complete that one has to look hard to see the actor at work, though it should be said that the full-blown mature Cheney is better realized than the younger man -- even an actor as talented as Bale has trouble realistically portraying a character half his own age. It is a marvel, a testament to Bale's talent and devotion to his craft.

And it makes the movie.

Yet I wonder if that's enough. I certainly didn't hate Vice, I was excited to see it and was dazzled by it. I didn't learn anything from it, but a lot of people don't go to the movies to learn things or to have their beliefs challenged, so maybe it's unfair to ask these things of would-be popular award-seeking movies. Vice give us the miracle of Bale as Cheney and some nice work from Amy Adams, Sam Rockwell and Steve Carell. Like McKay's The Big Short, it's breezy metafictional storytelling is underpinned by a reservoir of righteous anger. It's a well-designed, efficient machine.

But the further I get away from it, the less I think it matters.

And that's fine, if you believe movies needn't matter. There might have been more to Vice had it really interrogated the character at its center. Bale gives us a facsimile Cheney, and scrupulously maintains the impenetrability of the man. It's a faithful but coolly formal demonstration.

You need to see it.

But it probably won't change your thinking about anything. We have all grown up with the idea of the monster as a ordinary sort, less evil than wounded. If there was some primal hurt that drove Cheney's will to power, we don't see it on screen -- we meet him as a drunken young lout who flunked out of Yale for the second time and is in danger of losing his dynamic fiance Lynne (Adams). She tells him to straighten up, and he does. He becomes the man she needs -- the respectable masculine front for her ascendancy. (An interesting idea that was teased but not developed: Was Lynne Cheney the Lady MacBeth behind the man who was the brains behind the president? Was he her trophy?)

There's not much time for backstory; we just get snapshots suggesting that Lynne overcame a violent upbringing. And we see Dick wheedling his way into positions of trust, mostly by demonstrating unshakable loyalty and a certain moral pliability. He is a Machiavellian drone who attaches himself to Donald Rumsfeld (Carell) during the Nixon administration and breaks through as White House chief of staff for Gerald Ford (Bill Camp, who's having quite a year).

McKay cuts back and forth across time periods, with Cheney's actions on Sept. 11, 2001, forming a tonal center for the film. In the midst of crisis, there's no question Cheney's in charge. There's no question that he's essential personnel.

We miss a lot of what McKay might have decided was boring -- we get a bit about Cheney's first congressional campaign (when Lynne emerged as the star), but almost nothing about his years as the chairman and CEO of Halliburton. Little is made of the five draft deferments he received during the Vietnam War. We are allowed to perceive some tenderness in his relationships with his daughters, and there's a hint of humanity in the giddy phone call he makes to Lynne after moving into his first -- windowless and depressing -- office in the Nixon White House.

We just see how he got what he got. A plausible legal argument for the unitary executive. A record-low approval rating. A highly profitable war. Money, power, a new heart to buy him a few more years. A big-budget biopic that's an award season player. Another runaway American dream. 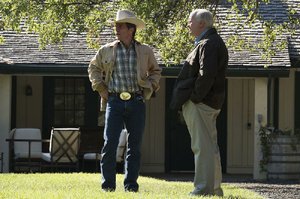 George W. Bush (Sam Rockwell) is willing to grant his running mate Dick Cheney (Christian Bale) unprecedented power as vice president in exchange for his advice and support in Vice.