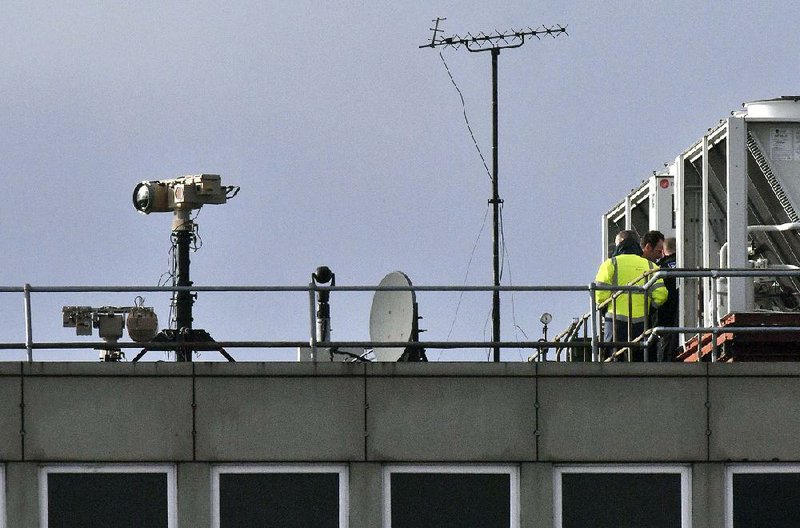 Security personnel deploy counter-drone devices Friday on a rooftop at Gatwick Airport, part of what Assistant Chief Constable Steve Barry of the Sussex police said included “technical, sophisticated options to detect and mitigate drone incursions, all the way down to less sophisticated options.”

Gatwick Airport, Britain's second-largest air hub, reopened Friday night after officials briefly closed its sole runway in response to an unconfirmed report of another drone incursion. The shutdown followed earlier drone sightings that had created chaos at the airport and delayed tens of thousands of passengers.

The runway had initially been reopened at 6 a.m. Friday after being shut for the better part of 32 hours. Things ran relatively smoothly until just after 5 p.m., when someone reported seeing another drone. Airport officials did not say if they had determined whether a drone had actually flown near the airport, but said that "the military measures we have in place at the airport have provided us with reassurance necessary to reopen our airfield."

As police continued to hunt for the culprit, or culprits, behind the incursions, officials at the airport, south of London, were struggling to accommodate the huge numbers of passengers disrupted by what was described as a deliberate act.

The episodes provided the starkest evidence to date of how vulnerable airports across the world are to drones, which are widely available, loosely regulated and more advanced in their technology than equipment meant to guard against the risks they pose.

Authorities reiterated on Friday that they had increased the numbers of officers involved in the criminal investigation, but in a sign of things to come, they had warned early in the day that they could not promise that the airport would remain open on a day when 126,000 passengers were hoping to fly out.

"I cannot guarantee that another drone isn't going to pop up and disrupt the airport," said Assistant Chief Constable Steve Barry of the Sussex police. "The situation is being kept under review, but we are in a much more positive situation than yesterday. The runway is open, and we hope to keep it that way."

Speaking to reporters outside the airport, Barry said there was "no evidence" that the drone incursions were state-sponsored, adding that they could be the result of "high-end criminal behavior" or "individuals trying to be malicious."

"Even shotguns would be available to officers should the opportunity present itself," Barry said.

News reports Friday showed that the scene at Gatwick had calmed considerably since the previous day, when frustrated, frantic passengers packed the airport's two terminals. Many travelers trying to either leave the airport or expecting to land there were still stranded and left to wonder whether they would reach their destinations by Christmas.

Before the shutdown Friday evening, at least 150 flights had been canceled and there was a heightened military and police presence around the airport. The discount airline easyJet, which like other airlines warned passengers to confirm the status of their flights before leaving for the airport, said that runway movements had been "restricted to a limited number per hour." It did not provide details.

"We have been working overnight with the police, with a number of government agencies and with the military to put in place additional mitigating measures," he said, declining to provide details.

The police in Sussex said they had teamed with law enforcement agencies from nearby Surrey and greater London as well as the military to mitigate further threats, but they noted that the opening of the runway remained under "constant review."

The initial shutdown -- which, except for one 45-minute stretch, ran from 9 p.m. Wednesday until Friday morning -- disrupted hundreds of flights, stranded tens of thousands of passengers and reduced British authorities to playing cat-and-mouse with the rogue drones.

About 20 police units searched the perimeter of the airfield Thursday for the devices' operators. By nightfall, the government said it would deploy the military in a bid to reopen the airport, although it was not clear in what capacity. 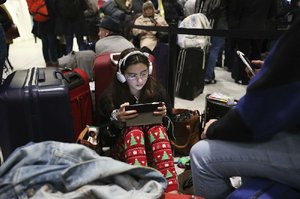 Photo by AP/JOHN STILLWELL
Travelers settle in to wait for flights Friday at Gatwick.