Hard to recognize: Slimmed-down Jones gets coach’s attention in 73-70 win over Texas State 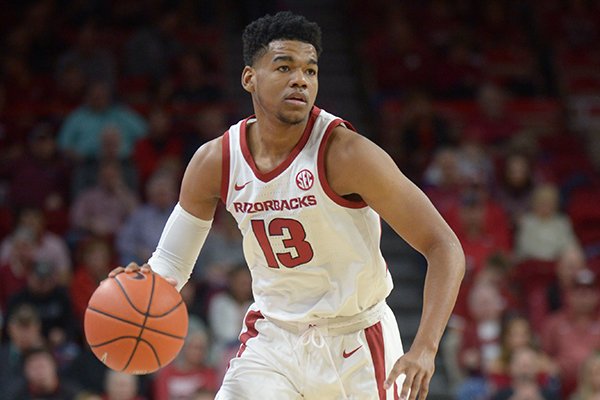 "If I remember correctly, he was somewhat of an overweight young man," Kaspar said. "No, we didn't recruit him. We should have, but we didn't."

Jones, a University of Arkansas sophomore guard who has lost about 70 pounds since his high school days, led the Razorbacks to a 73-70 victory over Texas State on Saturday in Walton Arena before an announced crowd of 7,182.

Jones matched his season-high with 21 points and also had 4 rebounds, 4 assists and 3 steals with 1 turnover in 33 minutes against the Bobcats.

"But I thought Jones was probably the one player that made a difference in the game today. He really had a good game. He was very efficient against us. He hurt us even more than Gafford."

The Razorbacks stopped the Bobcats' eight-game winning streak and broke their own two-game skid at Walton Arena, where they lost to Western Kentucky 78-77 and Georgia Tech 69-65.

"You've got to have somebody step up and make plays, and that's kind of what has been missing," Arkansas Coach Mike Anderson said. "Mason made some big ones for us."

The Razorbacks went 7:12 without scoring and fell behind 19-6 before Jones woke them up.

He made a steal and converted a three-point play with a driving basket and free throw to start a 17-0 run over nearly five minutes, and he capped it with a three-pointer that put Arkansas ahead 23-19 with 6:37 left before halftime.

Texas State never regained the lead, though the Bobcats tied it at 38-38 with 14:27 to play on sophomore guard Nijal Pearson's three-point basket.

That's when Jones took over again. He scored the Razorbacks' next seven points during a 10-2 run that pushed Arkansas' lead to 63-53 with 3:38 left.

Texas State didn't pull closer than five points the rest of the game until Alonzo Sule's layup with a second left.

"I just felt like both times my team needed a spark from somebody," Jones said about starting the Razorbacks' two big runs. "Coach A told me to step up.

"I was that guy today. Made the right plays at the right time when we needed it."

Jones' play was especially big for the Razorbacks because they didn't get the usual contributions from freshman guard Isaiah Joe and sophomore point guard Jalen Harris.

Joe, who came into the game averaging 16.5 points and 4.1 three-point baskets per game, was 1 of 6 from the field, including 1 of 5 on three-pointers. He finished with 10 points thanks to hitting 7 of 8 free throws.

Harris, who was second nationally in assist-to-turnover ratio at 6.6 and leading the SEC at 7.2 assists per game, scored 10 points but had more turnovers (2) than assists (1) for the first time this season.

"The plays that Mason made, they were sparks," Gafford said. "They were momentum plays that we needed to be able to win the game."

Jones, 6-5, said his weight got as high as 270 pounds when he was a high school senior. He gradually lost weight while playing at Triple A Academy in Dallas and at Connors (Okla.) State Community College before signing with Arkansas in the spring.

"I heard he was a big boy," Anderson said. "Much credit to him, between the prep school year and the junior-college year, he got his body right.

"Since then, he's worked to keep the weight off. That's helped him become the player that he is right now."

"It's an amazing story," Kaspar said of Jones' transformation. "What I know about him is he was not very highly sought out of high school. He really has developed himself into a nice a player."