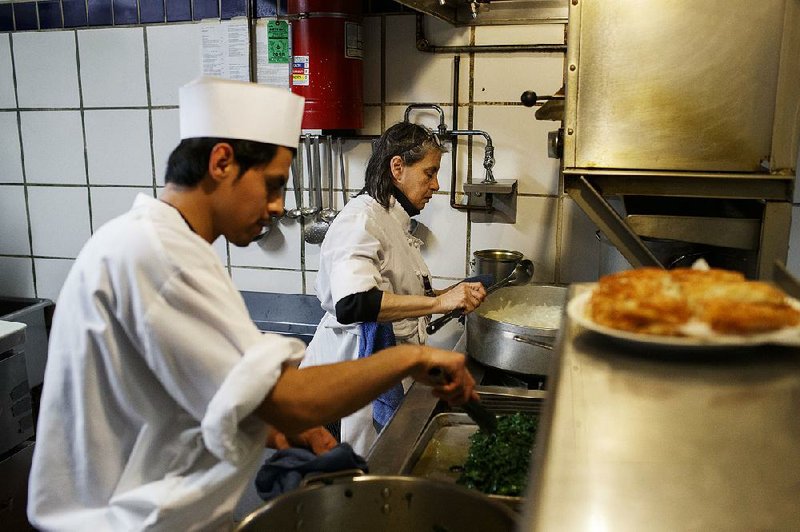 Chef and owner Mary Mastricola and Jose Luis cook in the kitchen at La Petite Folie earlier this month in Chicago.

She had booked 80 people for a four-course prix-fixe dinner at La Petite Folie, her French restaurant in Hyde Park. But with two employees recently resigned and others unavailable to work the holiday, there was almost no one around to cook and serve it.

So Mastricola pulled the evening off assisted only by her loyal dishwasher-turned-cook and a University of Chicago pediatric pulmonologist who moonlights as a pastry cook in the restaurant's kitchen.

"It was nutcase," Mastricola recalls.

She expects better staffing as she prepares for this year's New Year's menu -- but that crazed feeling has become familiar.

A huge boom of new restaurants in Hyde Park and throughout Chicago has left Mastricola competing not only for customers but for employees, who are quick to go to larger restaurants that can afford to pay more.

The revolving door has led to the executive chef working 17 hours some days, taking out trash or scrubbing pots when employees don't show up for their shifts or quit without notice.

"Someone has to fill the gap, and it's almost always me," Mastricola said. "There is an exhaustion that sets in that makes it hard to even be civil."

Restaurateurs for years have complained of the difficulty of finding good workers, but they say the labor crunch has intensified with a surge of new openings, a smaller pool of immigrant workers and more opportunities for cooks in non-restaurant jobs with saner hours.

The squeeze is particularly profound at small independent restaurants without the allure of big-name backing or room in their budgets to absorb higher pay.

But even famous chefs say the struggle is real.

"We overbuilt restaurants for the labor force we had," said Rick Bayless, owner of Frontera Grill, Lena Brava and other celebrated eateries. "There's just not enough people."

The number of full-service restaurants in Cook County jumped 12 percent between 2012 and 2016, to 4,074, and the number of employees working in them surged 20 percent, to more than 95,000 people, according to the most recent census data.

Those numbers don't capture the boom that continued in the years that followed or the 7.5 percent job growth that the National Restaurant Association predicts for Illinois over the next decade.

For the past three or four years, during the busy summer months, the talent shortage has been so dire that restaurants routinely offer competitors' employees an extra dollar per hour over what they are currently making, Bayless said. His restaurant group now pays prep cooks 25 percent more than it did three years ago.

Opportunities are so plentiful that some of Bayless' help-wanted ads get zero responses. This summer 60 percent to 70 percent of people didn't show up for stage (pronounded "staaj"), an unpaid internship that is a training tradition at high-end restaurants, he said.

"Sometimes a job interview will go like this: Instead of me saying, 'Tell me about your experience,' they say, 'What are you paying an hour?'" Bayless said.

That's good news for low-wage workers as they contend with rising costs of living, but small restaurants, in particular, are feeling pinched.

"There is a structural inequality here," said T. William Lester, associate professor of urban planning at University of North Carolina-Chapel Hill. "What happens when the higher-revenue places can attract better workers because they can pay a higher wage? Then the smaller restaurants will have a higher turnover and will have to train more workers, which takes time and money. It becomes a really big bind."

The reasons for the labor crunch go beyond the heightened competition from new restaurants.

Culinary school closures and declining enrollment also may be affecting the pipeline, as students with dreams of becoming the next celebrity chef realize that their expensive investment will actually yield years of low-paying jobs in unglamorous environments, Reynolds said.

"Many of our graduates weren't in the industry five years later because they didn't like the lifestyle or they couldn't afford to stay in it," he said.

Meanwhile, fewer teens are working, opting instead to spend their summers interning or traveling. A third of 16- to 19-year-olds had summer jobs last year, compared with half in 2000, and earlier starts to the school year make it even harder to staff up during peak season, Reynolds said.

Sam Toia, CEO of the Illinois Restaurant Association, blames toughened immigration policies for striking at "the backbone" of the hospitality industry, which historically has relied heavily on immigrants to staff kitchens. Immigrants, who make up 13 percent of the U.S. population, account for 31 percent of hotel workers and 22 percent of food service workers, according to a report last year by the Chicago Council on Global Affairs.

"The pool [of immigrants] is shrinking, and you're not filling that pool anymore," Toia said.

Toia predicts that restaurants will face additional staffing hurdles if Illinois makes recreational marijuana legal, as the same people who work in restaurants might want to work in marijuana-related businesses.

"You think we're squeezed now, we're going to be squeezed more," he said.

She doesn't have the economies of scale that help larger restaurants save on food prices. Chicago's minimum wage, which has been inching up for the past three years to $12, and reaches its goal of $13 an hour in July, has made it hard for her to reward top performers with extra pay.

Joe Frillman, chef-owner of Daisies in Logan Square, stays closed two consecutive days a week so that he and his employees can have a proper weekend.

Frillman had worked so many 60- to 80-hour weeks in kitchens during his career that he was considering leaving the industry when investors approached him about opening his own place. Recently married at the time, with a baby on the way, he insisted on the two-day weekend so he could spend time with his family.

Daisies also adds a 2 percent service charge to every customer check to help pay for full health benefits for employees, an idea Frillman says he borrowed from chef-owner Jason Vincent at nearby Giant. Customers can opt out of the extra fee, and some have, but most get behind the mission, he said.

Health benefits are rare in small restaurants, and it's a perk he never had before he got on his wife's insurance.

The health surcharge covers only about a quarter of the benefit costs; employees who want insurance pay $50 per paycheck, which covers another quarter, and Frillman picks up the rest.

It isn't cheap, but Frillman said he trims elsewhere in his budget. He also expects the investment to save him money in the end by reducing turnover and training costs.

Frillman offers other perks, including a $1,200 referral fee to any employee who brings on a new hire who stays at least a year. And he touts the learning opportunities of a smaller kitchen, where he and his sous chefs can give workers more individualized attention.

"People tend to gravitate toward bigger restaurants with big names," he said. "We are trying to flip that to make the independent restaurant more captivating."

Feedback from employees has been positive, he said. Most of the workers who helped him open the restaurant a year and a half ago are still there.

Still, he said, people aren't paid enough for the effort they put into making high-end food. He hopes to see higher menu prices so wages can rise.

"The industry is changing," Frillman said. "If you want to keep people, everyone is going to have to adapt to it or they are going to close."