Role play and epic quests at a Utah theme park 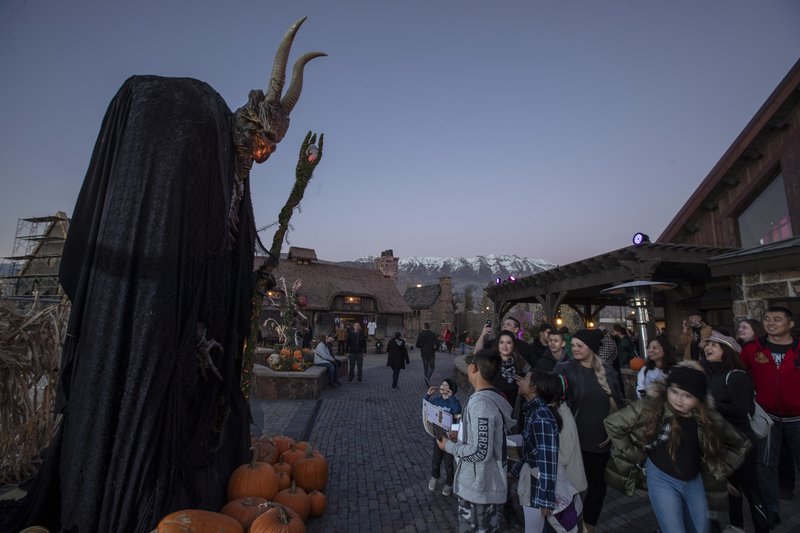 PLEASANT GROVE, Utah — The future of theme parks might just be in a Salt Lake City suburb. This is where you will find Evermore, where one of its star attractions is not a state-of-the-art coaster nor a thrill ride populated with scenes from a recent superhero movie. Instead, it is a tavern called the Crooked Lantern.

To get to the Crooked Lantern, one of the oddest and liveliest bars west of the Mississippi, you must dodge the druids near the town border, walk past the aviary without being distracted by the woman with a baby dragon and hang a left at the gaggle of buzzing faeries.

They'll want to chat — faeries are a chipper lot — but it's best to get inside the pub's doors before one gets led astray. Faeries lie. Everyone here seems to know that, especially the ghosts. And everyone is welcome.

Whether you are a regular or entering the Crooked Lantern for the first time, expect to receive a friendly and loud greeting, likely from the bartender Suds McBride. Crowds are attracted to Suds, who walks atop the bar and likes to tell guests about the time he was swallowed whole by a fish — the 4- or 5-foot monster that lies dead, intestines out, in the back of the bar.

On this particular Friday night, Suds had an announcement to make: "My tavern is not for getting drunk and forgetting everything," he shouted. "My tavern is a place for good memories!"

Just don't tell that to the hunters — they're the stoic ones in all-black, ready to warn you of your impending doom.

Your journey through Evermore, where the emphasis is on play and human interaction, has only just begun.

Imagine a renaissance fair, if it consisted of permanent buildings built across a dozen acres and possessed a Disneyland-like attention to detail. Or a game of "Dungeons & Dragons," only there are no dice and maps. Or picture walking down Disneyland's Main Street U.S.A., but instead of Mickey Mouse posing for photo ops, he asks for help finding Minnie and suggests you go talk to Goofy — only to talk to Goofy you first must discover a way to earn his trust. 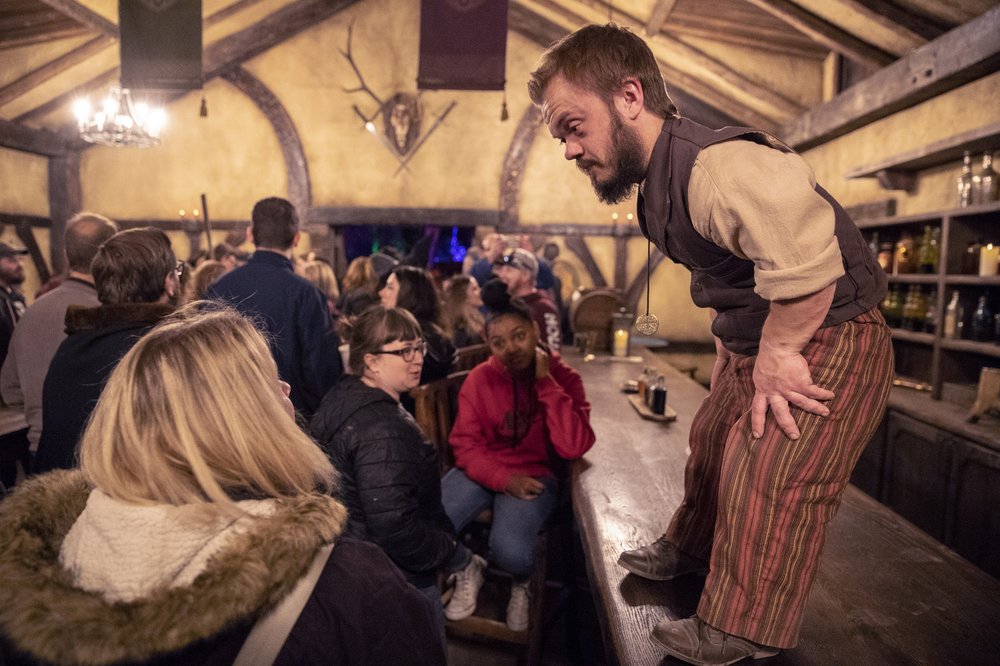 “Suds McBride,” bartender at the Crooked Lantern Tavern at Evermore, chats with guests and tells tall tales from atop the bar.

To set foot in Evermore, a quirky old-English town with crooked roads, dizzying catacombs and a bustling population of fantastical creatures, is to not just enter a theater but to become one of its central characters. There are no rides — at least not yet. Instead, there are game-like quests to seek out and lots of role play. It's the sort of alternate reality envisioned by video games and teased — or warned — by TV's Westworld, and it's going to change how we view theme parks.

That's because the tenets at the core of Evermore are already reverberating across the theme park industry. Evermore taps into a hunger for nonscreen-based, experience-focused entertainment, and it arrives at a time when escape rooms continue to dot the country and we're seeing a rise in interactive theater, such as the site-specific production "Sleep No More," which helped spawn an immersive entertainment movement. 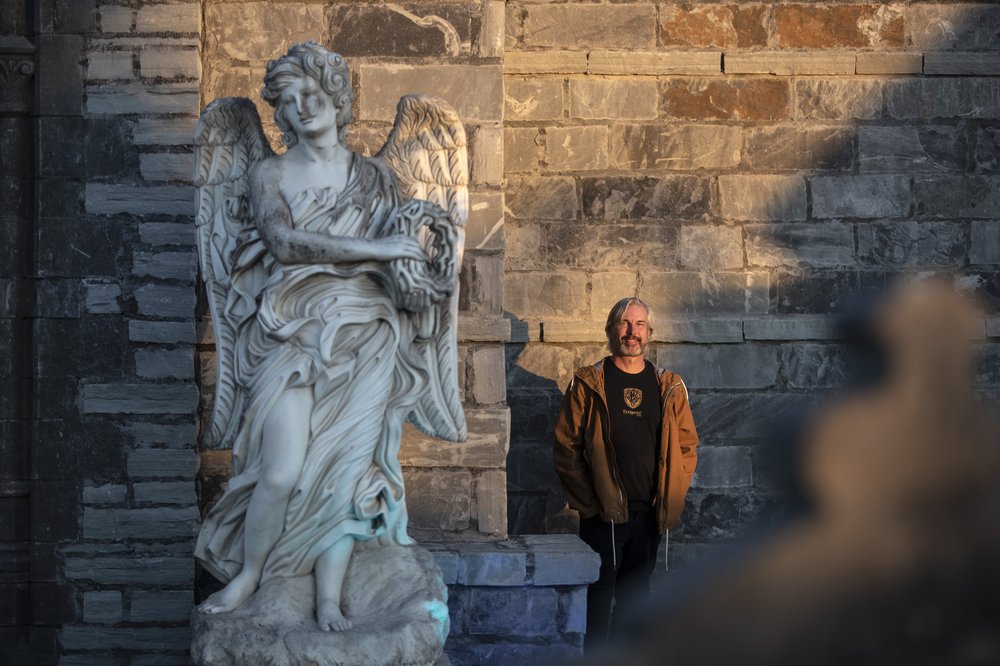 CEO Ken Bretschneider got the idea from the immersive, role-playing Evermore park from frequent trips to Disneyland and his own elaborate Halloween parties.

Evermore is the dream of Ken Bretschneider, a tech-industry innovator who co-founded the virtual reality company The Void. The latter's "Star Wars" adventures can be found at Downtown Disney and the Glendale Galleria, among other locales. Before The Void, Bretschneider was behind the web security company DigiCert, and when he ran the latter he treated his employees and their families to a yearly retreat to Disneyland.

While it was Disneyland that shaped how Bretschneider viewed entertainment, it was Halloween parties that inspired Evermore.

"Every year I've done a big Halloween experience at my house," Bretschneider says inside Evermore's Crooked Lantern, sitting at the long, wooden communal table an hour after park closing at 1 a.m. "That was the crux of me wanting to do this thing."

Bretschneider's Halloween parties sound like the kind of byzantine mazes you'd see at Universal Studios or Knott's Berry Farm. Mermaids swam in his backward pool, and projections indicated that there were dueling pirates behind impossible-to-reach rooms.

Utah papers covered the parties, for which the public was invited, as if they were amusement parks, writing of pianos played by animatronic skeletons and illusions of heads floating in vases. In 2013, Bretschneider estimates that 11,000 people visited his Lindon, Utah, home.

His home, reasons Bretschneider, was not just more intimate but "more immersive. There was more detail. That's what made it more exciting for people for that one night. So I said, 'What if I open up a place that can be more exciting ... for a whole bunch of nights?'" 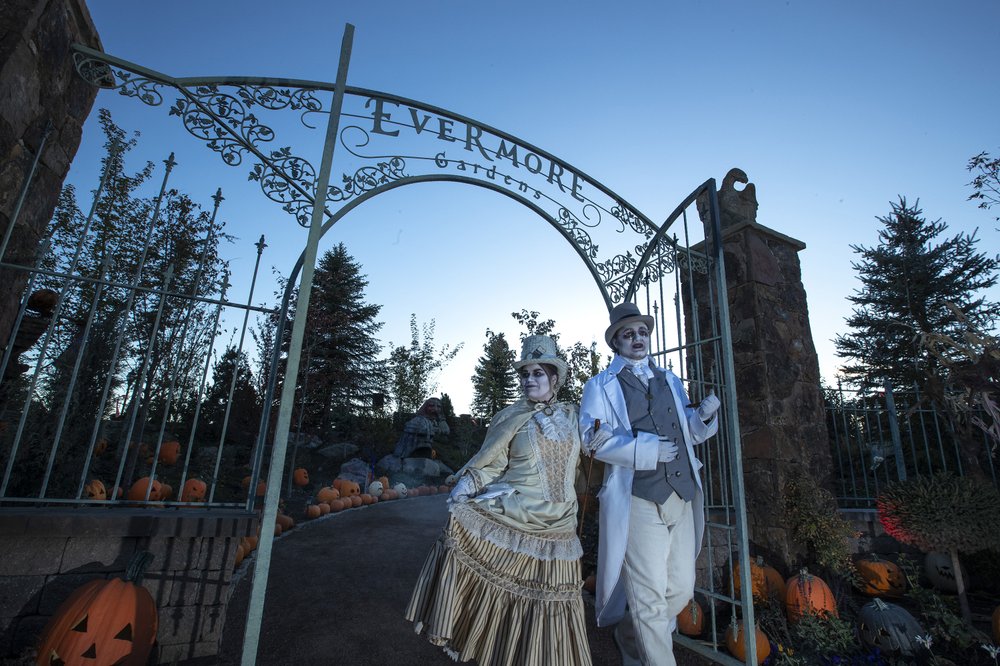 Victorian-theme performers take a stroll around the gardens at Evermore, a unique theme park in Pleasant Grove, Utah.

Guests who actively sought out Evermore's myths and storylines earlier this fall learned of a plague that was afflicting the town — those infected had roots and tree bark growing out of their skin. Guests could align with various guilds, the battle-scarred hunters, for instance, or the Fae King, a towering animatronic puppet that pledged cult-like protection to those who kneeled before him.

The shy could simply enjoy the park's entertainment — folksy bands, fire-wielders, fortune tellers or archery ranges. But all of that also is entwined into Evermore's story.

You could spend a night learning about the ways of the hunters, but for them to open up to you it helps to prove you have skill with a bow. If you pass that test, they may send you deep into the crypts — in a cemetery filled with very-real antique gravestones bought in Europe — to retrieve a requested item, which in turn could lead you to a witch's house.

Or you could avoid the main plot altogether. A lovesick ghost may give you messages to her living crush, a man who just so happens to keep suffering random, near-death accidents. 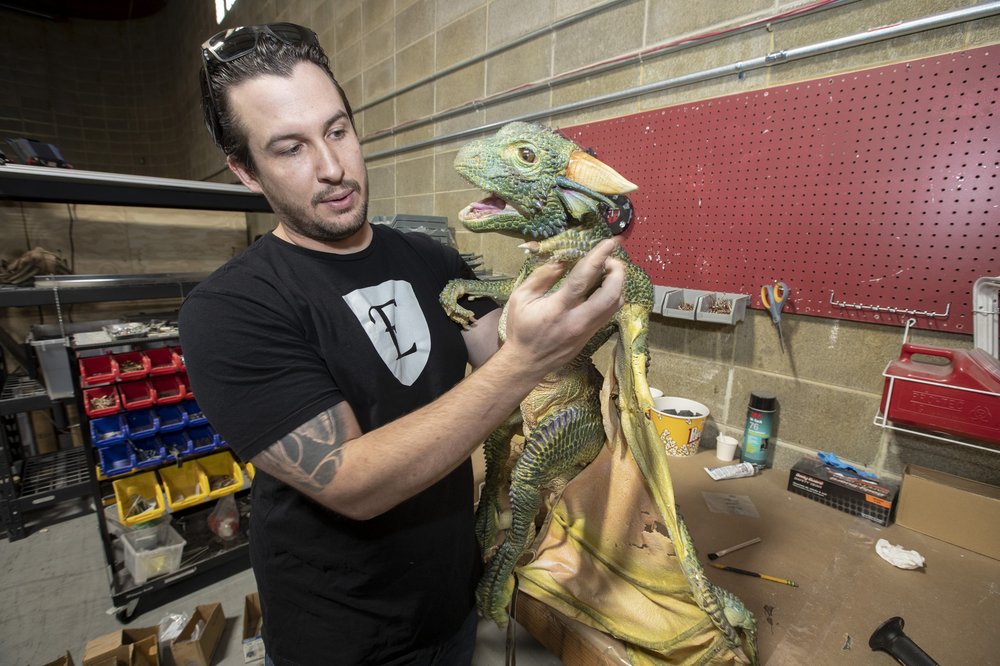 Studio director Logan Long takes care of a dragon in need of repair in the creature shop at Evermore.

At the moment, high-tech wizardry is used relatively sparingly at Evermore. One can find ghostly projections in some of the crypts, and Bretschneider and Evermore's chief creative officer Josh Shipley are looking at ways to bring in augmented reality. But Evermore feels decidedly old-fashioned. Much of its stone and bricks were imported from Europe, and Bretschneider hunted down statues and artifacts from pre-1900 to give it a lived-in feel.

That's fitting. Evermore specializes in a rather ancient form of play, one reliant on guest interaction and imagination. Such an illusion of freedom harks back to the early days of Disneyland and the initial vision of Frontierland and Tom Sawyer Island.

"We're saturated with media and bombarded with digital media from all sides all the time," says Phil Hettema, an esteemed designer in the theme park world who currently runs his own company and was previously a senior executive at Universal. "We're actually becoming more isolated, and the secret sauce of theme parks is that they're really about the experience they create between people who are visiting."

Whether Evermore is ultimately a success, Hettema says to expect more of what the park is trying to accomplish beyond its borders.

Some of the stars of Universal's Wizarding World are its interactive wands, which allow guests to play with one another and turn the land itself into an attraction. Disney, for its part, is building a Star Wars-theme hotel in Florida, one in which guests will be immersed in a storyline that unfolds over the length of the stay.

And at Disney's forthcoming Star Wars: Galaxy's Edge, opening next year at Disneyland and Walt Disney World, it has been said that guests can take on various roles. "If you want to be a bounty hunter and you want to go on a cool mission, we'll let you do that," the company said at its 2017 fan convention, the D23 Expo.

The more that guests are buried in cellphones, Hettema says, the less interested they become in pure tech-driven experiences.

"To me, where it's really special is where it becomes that one-on-one intimate experience, five or six people together discovering something, playing a role maybe and going and doing something that you just never would have imagined you could do," Hettema says. 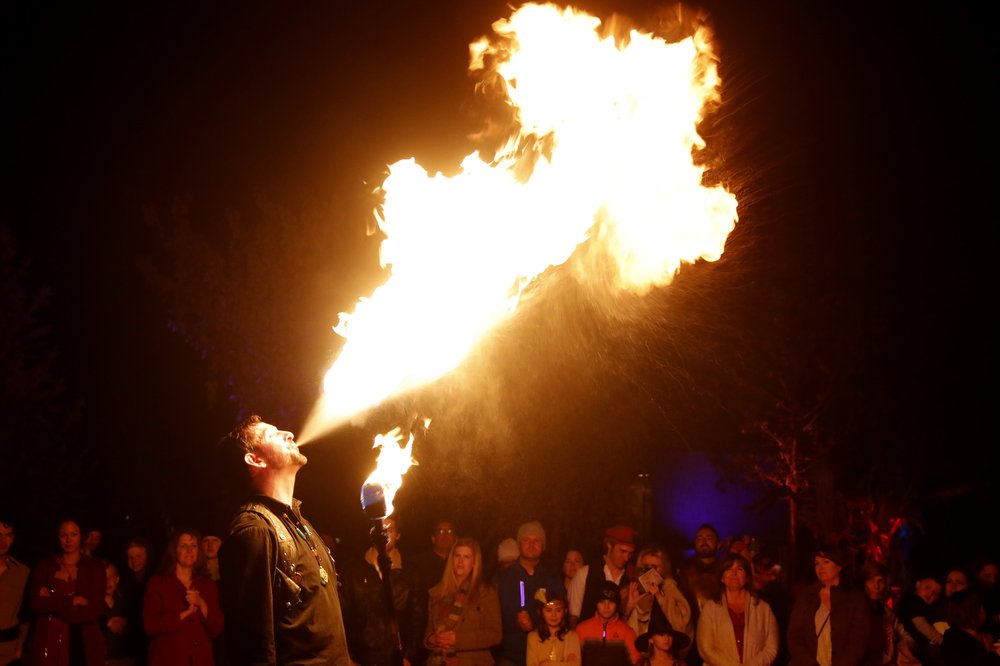 Bryan Blaze breathes fire during his performance at Evermore in Pleasant Grove, Utah. Visitors can just enjoy the sights and performances or can have a more interactive, role-playing experience.

Of course, theme parks have experimented with such experiences.

Before Knott's Berry Farm had its Ghost Town Alive! Disneyland had the short-lived Legends of Frontierland. And throughout the 1990s, Walt Disney World had the Adventurers Club, a beloved nightclub dedicated to fictional exploits where stones could come alive, artifacts were haunted and guests were treated as prospective members. There were old-fashioned radio shows, cabaret-like routines and plenty of seemingly drunken songs.

Despite a fan outcry, the Adventurers Club closed about a decade ago. "Adventurers Club did work," Shipley says. "To this day, I think it's a tragedy that it doesn't exist, or that it wasn't evolved, if that was the need from a business model."

Fans, however, will find a way.

There's growing evidence that many are going to Disneyland to role play, even if the park isn't officially giving them experiences to do so. Wildly popular non-Disney-run events such as Dapper Day allow guests to play dress-up in the park and embody a character.

Such play is the ultimate form of escapism.

"The things that were most immersive actually were the lowest-tech things — Tom Sawyer's Island, you know things like that," Hettema says. "And I think we're coming full circle back to finding out that's where the real magic was. Technology is less and less dazzling to us as every day goes by because it's so ubiquitous."

Evermore, though, has advantages that Disney and Universal do not.

For one, it doesn't have to struggle with creating intimate experiences for tens of thousands of people per day. And while Bretschneider says he is open to doing special events and one-off nights catered to a specific brand — business will likely depend upon it, he concedes — he pledges that Evermore will exist as "original IP" or intellectual property.

Evermore's winter season, Aurora, is open through Jan. 2. Mythos will open in the summer and Lore in the fall. For more information, visit evermore.com.

Print Headline: The play's the thing