Voyage starts for Frenchman out to cross Atlantic in barrel

LONDON -- Drifting in the ocean in a sailboat at the mercy of winds and currents would be a nightmare for many. But a 71-year-old Frenchman with a taste for adventure has found a new way to conquer the Atlantic Ocean: in a barrel.

Adventurer Jean-Jacques Savin set sail Wednesday from El Hierro, the smallest of the Canary Islands, the Spanish archipelago west of Morocco. He will attempt to reach the Caribbean with only ocean currents and trade winds propelling his capsule, according to a Facebook page set up to document his project, where he plans to post daily updates, including GPS coordinates tracking the journey.

Many people have crawled into barrels to go over Niagara Falls, with some surviving, but no one has been known to cross the Atlantic in a barrel made of plywood.

Savin, who hails from the oyster-farming town of Ares, in the southwest of France, hopes to achieve the feat in about three months in an orange barrel-shaped capsule about 10 feet long and 6 feet 8 inches wide. It's smaller than a pickup and held upright by a concrete ballast.

On his project's website, Savin -- a former military parachutist, pilot and park ranger in Africa -- described his venture as a "crossing during which man isn't captain of his ship, but a passenger of the ocean."

Savin has already crossed the Atlantic four times using a sailboat. His new venture comes decades after another Frenchman, Alain Bombard, set out from the Canary Islands to Barbados in a small rubber boat in 1952, subsisting only on seawater, plankton and raw fish.

Savin has a few home comforts on board: A wine lover, he is carrying an amphora of wine from near Bordeaux. Another bottle remained in France, and experts will compare the taste of the two after Savin's return. But the capsule, which he said he built himself this year in a small shipyard in Ares, offers spartan living quarters.

A bunk bed, a captain's seat and a kitchen counter take up most of the interior, and there is barely enough space for a man to stand. Two doctors will study Savin's health and behavior after months in such a confined space at sea.

Small portholes on each side of the capsule and a couple looking into the water are Savin's windows on the world.

The capsule also has satellite technology to guide him and is carrying equipment to gather data for ocean research.

The initial funding for Savin's $62,000 adventure came from a group including two French barrel makers; the rest was gathered via crowdfunding.

Drifting south and west from the Canary Islands, Savin expected to be at sea for his 72nd birthday, in January. For New Year's Eve and his birthday, he has packed foie gras, a bottle of Sauternes white wine and a Saint-Emilion red, he told French news service Agence France-Presse.

He said he would like to end up on a French island -- the paperwork would be easier, he said -- and he intends to take a flight home. 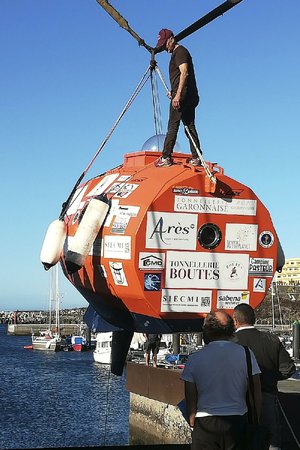 Photo by Courtesy of Jean-Jacques Savin via AP
Adventurer Jean-Jacques Savin stands atop his barrel-shaped capsule Saturday. The former military paratrooper, pilot and park ranger in Africa set out in the capsule Wednesday from the Canary Islands with the goal of reaching the Caribbean by means only of ocean currents and trade winds as “a passenger of the ocean.”

Print Headline: Voyage starts for Frenchman out to cross Atlantic in barrel