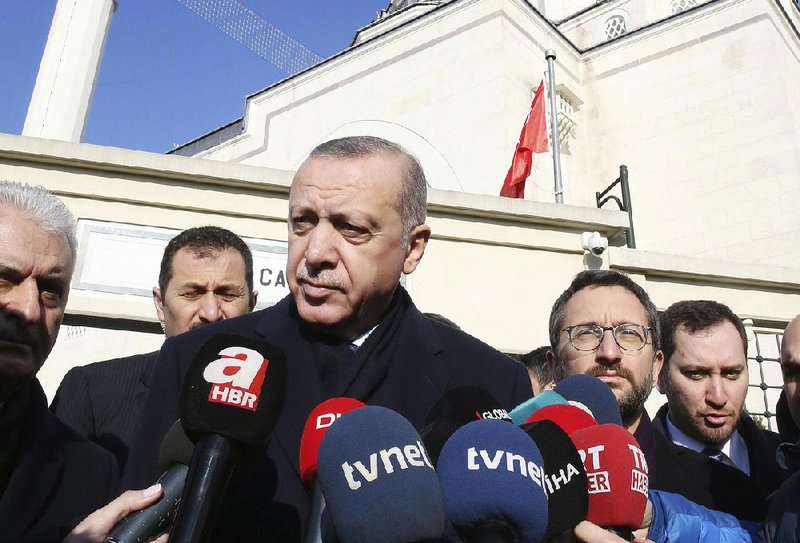 Turkish President Recep Tayyip Erdogan said Friday in Istanbul that Syria’s claim that its troops had entered the Kurdish-held Manbij region was a “psychological operation,” but added that “these areas belong to Syria.”

ISTANBUL -- The Syrian army said Friday that it has entered a key city in northern Syria at the behest of local Kurdish fighters, raising the government flag in a bid to thwart Turkish plans for a military offensive.

But both the U.S.-led coalition in Syria and Turkish President Recep Tayyip Erdogan contested the claims about Syrian troop movement.

Kurdish forces known as the People's Protection Units had called on Syria's government to "assert control" in the city of Manbij and protect it "against a Turkish invasion" after a buildup of Turkish troops and tanks in the area, the Kurdish forces said in a statement Friday morning.

The military said in a statement Friday that it did so "in response to calls from residents" and to "reimpose sovereignty over every inch of Syrian territory."

But the exact location of the troops could not be confirmed. A fighter with the Kurdish-led Syrian Democratic Forces said in a text message that government forces had not yet deployed.

A spokesman for the U.S.-led coalition fighting the Islamic State tweeted, "Despite incorrect information about changes to military forces in the city of Manbij, Syria, #CJTFOIR has seen no indication that these claims are true. We call on everyone to respect the integrity of Manbij and the safety of its citizens."

Erdogan told reporters Friday in Istanbul that the Syrian army's announcement was a "psychological operation" and that "nothing was certain" regarding troop movements in the area.

In any case, "these areas belong to Syria," he said in comments carried by Turkey's state broadcaster.

"Once the terrorist organizations leave the area, we will have nothing left to do there," he said.

Turkey said this month that it would launch a sweeping incursion east of the Euphrates River to target the People's Protection Unit fighters it says threaten its security. Turkish forces have fought a decades-long battle against separatist Kurdish guerrillas at home.

But the offensive was delayed after a surprise announcement by President Donald Trump this month of a planned withdrawal of U.S. troops from Syria, where they have partnered with Kurdish fighters battling the Islamic State.

As part of that effort, the U.S. military has deployed forces to Manbij, where they have been patrolling the front line between the city and adjacent towns where fighters backed by Turkey are based.

The U.S.-led coalition said in an email Friday that it could not discuss U.S. troop locations "for operational security reasons."

"We cannot discuss where our forces are in Syria or specific timelines on when they'll be moving," the email said.

Ilham Ahmed, a senior Kurdish official, said the U.S. troops have not yet withdrawn from Manbij. She said an agreement is being worked out between the Russians and the Syrian government in which the latter takes over once the withdrawal is complete.

"The aim is to ward off a Turkish offensive," Ahmed said. "If the Turks' excuse is the [Kurdish militia], they will leave their posts to the government."

Trump's surprise announcement that he would pull U.S. troops had raised fears of a scramble by a patchwork of conventional forces, foreign proxies and Islamist militants to take advantage of the resulting vacuum.

Through their alliance with the United States, Syria's Kurds gained unprecedented military and political power during the war. As the Islamic State fighters were pushed back, the Kurds often filled the political gap left behind, establishing councils to run local affairs.

But aware that the United States could eventually withdraw, they had also begun talks with the Syrian government about reconciling.

Abdulkarim Omar, a foreign relations official with the Kurdish-led administration in northeastern Syria, said by phone Friday that the talks continued and the only issue that had been agreed upon so far was the Syrian army deployment near Manbij after the Americans withdraw.

When asked if that agreement had been coordinated with the United States, he said: "You can ask the Americans."

Turkey had long urged the United States to abandon its Kurdish allies in Syria but, analysts say, did not anticipate a full U.S. withdrawal.

Now, Turkish officials say, they are coordinating with the United States to prevent a power vacuum in northeastern Syria.

But Turkey does not have a similar force capable of stabilizing areas east of the Euphrates and could stoke wider conflict with Syria's government or Iran-backed fighters, analysts say.

Turkish and Russian officials will meet in Moscow today to discuss Syria, they said.

"This is a positive step toward stabilizing the situation," Kremlin spokesman Dmitry Peskov said, according to the report.

In Washington, Republican Sen. Lindsey Graham, who broke with Trump on his decision to withdraw U.S. troops from Syria, tweeted that reports about the Kurds aligning with Assad were a "major disaster in the making." Graham, a leading voice on foreign policy and national security issues in Congress, warned the development would be a "nightmare for Turkey and eventually Israel." Graham tweeted that the "big winners" are Russia, Iran, Assad and Islamic State militants.

National Security Adviser John Bolton is expected in Turkey after the new year.

Information for this article was contributed by Erin Cunningham and Suzan Haidamous of The Washington Post; by Ben Hubbard of The New York Times; and by Sarah El Deeb, Nataliya Vasilyeva, Zeynep Bilginsoy and Lolita C. Baldor of The Associated Press.