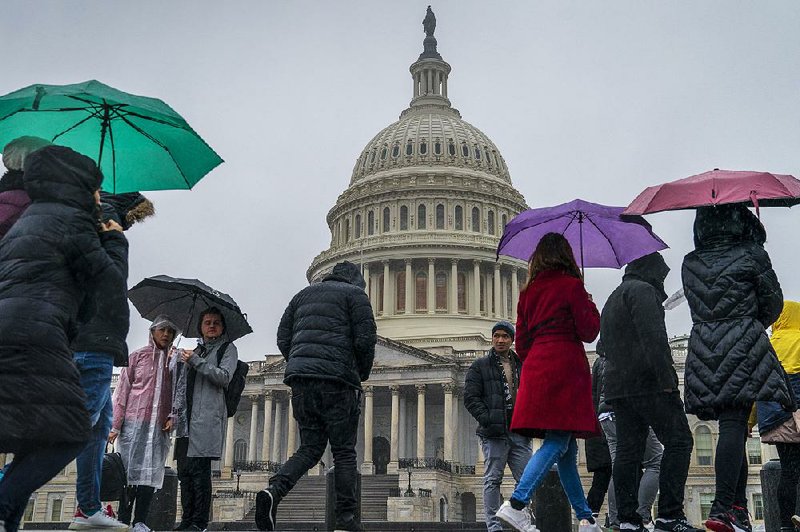 Rain greets tourists Friday morning at the U.S. Capitol. Congressional leaders have left Washington, but aides said they could return if an agreement to end the government shutdown is reached.

WASHINGTON -- With the partial government shutdown headed toward its second week and no resolution in sight, President Donald Trump on Friday issued a string of tweets in which he again vowed to close the entire U.S. border with Mexico and halt aid to several Latin American countries unless Democrats agree to his demand for billions of dollars in wall funding.

Trump also canceled plans to visit his Florida resort, Mar-a-Lago, and will remain in Washington over the New Year's holiday, Office of Management and Budget Director Mick Mulvaney said.

About 25 percent of the federal government has been shut down since last Saturday, with roughly 800,000 workers affected, including an estimated 350,000 who are on furlough at home.

"We will be forced to close the Southern Border entirely if the Obstructionist Democrats do not give us the money to finish the Wall & also change the ridiculous immigration laws that our Country is saddled with," Trump said in a morning tweet.

In a reprise of his threat before the midterm elections to cut off aid to Honduras, Guatemala and El Salvador as a caravan of Central Americans was making its way toward the United States, Trump said that those three countries "are doing nothing for the United States but taking our money."

"Word is that a new Caravan is forming in Honduras and they are doing nothing about it," he said, without providing further details. "We will be cutting off all aid to these 3 countries -- taking advantage of U.S. for years!"

Despite Trump's threat, the United States this month announced a new collaboration with Mexico on a program to curb migration from Central American countries, with much of the $10.6 billion U.S. contribution to be drawn from existing aid programs.

Trump said in another tweet that the U.S. "looses soooo much money on Trade with Mexico under NAFTA, over 75 Billion Dollars a year (not including Drug Money which would be many times that amount), that I would consider closing the Southern Border a 'profit making operation."'

Trump's tweets come as Congress has effectively given up on breaking the impasse over the president's demands for border-wall funding, all but ensuring that the partial shutdown will stretch into at least the start of the new year.

The House and the Senate convened for just minutes Thursday before gaveling closed until next week. During the brief session in the House, Republicans shot down a Democratic attempt to vote on legislation to reopen the government.

Members of the congressional leadership were not in Washington, though aides insisted that lawmakers could return if there is a deal to end the shutdown. Senate Majority Leader Mitch McConnell, R-Ky., was in his home state, according to his office, while Senate Minority Leader Charles Schumer, D-N.Y., was with his family in New York.

Aides to House Speaker Paul Ryan, R-Wis., and House Minority Leader Nancy Pelosi, D-Calif., declined to say where they were.

"The House remains ready to act once there is a product that can pass the Senate and that the president says he will sign," said AshLee Strong, a spokesman for Ryan.

Trump's previous threats to build a wall and force Mexico to pay for it led to diplomatic clashes with the government of former president Enrique Pena Nieto. But Mexico's new president -- Andres Manuel Lopez Obrador, who is a leftist -- has tried to avoid such disputes.

Asked about Trump's latest tweets, Lopez Obrador told reporters Friday: "We have acted prudently and cautiously, and we have not expressed an opinion on this theme, because this is an internal matter of the U.S. government and we prefer to abstain" from making a statement.

He added that the Mexican government "is seeking to always maintain a very good relationship with the government of the United States."

Mulvaney said Trump is serious about shutting the U.S.-Mexico border. "I think he's just trying to draw light to fact that this is a crazy discussion to be having," he said.

As he did Thursday, Trump remained out of public view on Friday. In an appearance on Fox News, Mulvaney said that the president had "canceled his plans for Christmas, and now he's canceled his plan for New Year's."

"He's staying in Washington, D.C., over New Year's," said Mulvaney, who is set to become Trump's acting chief of staff next month.

White House press secretary Sarah Sanders said early Friday afternoon that the president was in the West Wing meeting with staff members and making calls and that there were "no plans as of now" for him to travel to Florida.

Even though Trump will be in town and Republicans control both chambers of Congress, Mulvaney acknowledged that little progress on a deal is expected until the start of the new Congress on Thursday when Democrats will retake the House.

Contending that Democrats "have simply shut down the discussions," Mulvaney claimed that Schumer "was really interested in doing a deal" in their recent negotiations, "but the more we're hearing this week is that it's [House Minority Leader] Nancy Pelosi who's preventing that from happening."

"Nancy Pelosi, in fairness, does not have the votes for the speakership yet," Mulvaney said. "She cannot be seen by her party as being weak on negotiating with Donald Trump. So we fully expect that until she is elected speaker and has locked that vote up, we don't expect to hear from the Democrats again."

Throughout the negotiations, Pelosi and Schumer have presented a united front, issuing several joint statements and appearing together at an Oval Office meeting with Trump and Vice President Mike Pence on Dec. 11.

Pelosi's spokesman, Drew Hammill, said in a statement Friday that Democrats "are united against the President's immoral, ineffective and expensive wall -- the wall that he specifically promised that Mexico would pay for."

Democrats will not consider any offers that have not been publicly endorsed by Trump himself, he said, adding that the last time the White House directly reached out to Pelosi was when the president called her after the Oval Office meeting.

"While we await the president's public proposal, Democrats have made it clear that, under a House Democratic majority, we will vote swiftly to reopen government on Day One," Hammill said.

A Schumer spokesman said that Schumer and Pelosi "have been in constant and close contact and on the same page with regards to shutdown strategy. There is no daylight between them."

But even with a Democratic majority in the House, reopening the government may be difficult without a compromise because the Senate will remain in Republican hands and Trump's signature will be needed to turn any bill into law.

"I think it's obvious that until the president decides he can sign something -- or something is presented to him -- that we are where we are," said Sen. Pat Roberts, R-Kan.

At the heart of the stalemate is Trump's demand for $5 billion in funding for his proposed wall at the U.S.-Mexico border.

Congressional Democrats have rejected that figure and in recent weeks have refused to publicly endorse a figure above $1.3 billion, which continues existing funding levels and includes money for new border fencing and levee walls, but not the concrete wall Trump once demanded before he started more recently talking about "steel slats."

Legislation with that level of funding, which would have kept the entire government open through Feb. 8, passed the Senate unanimously last week, but Trump subsequently rejected it.

Mulvaney said Friday that "some folks use the term 'wall' and they mean different things."

"Everyone agrees that what we can and should be building on that southern border is that steel barrier that the president tweeted out. That's what he wants to build. The Democrats, believe it or not, don't call that a wall," he said.

As the shutdown drags on, museums and galleries popular with visitors and locals in the nation's capital will close starting midweek. So will the National Zoo and a lively ice rink near the National Mall.

The attractions have stayed open by using unspent funds, but they are about to run out of that money.

The shutdown also is affecting national parks, although unevenly. Some remain accessible with bare-bones staffing levels, some are operating with money from states or charitable groups, and others are locked off. 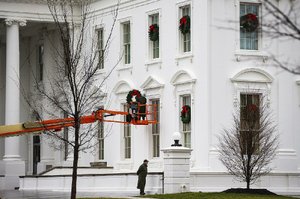 Photo by The New York Times/AL DRAGO
Workers take down Christmas decorations at the White House on Friday. Aides said President Donald Trump was at the White House holding meetings and making calls. Office of Management and Budget Director Mick Mulvaney said that Trump had “canceled his plans for Christmas, and now he’s canceled his plans for New Year’s.” 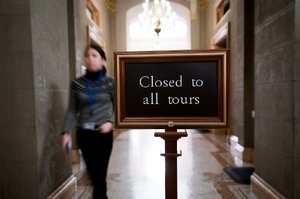 Photo by The New York Times/ERIN SCHAFF
A corridor near the U.S. Senate chamber is closed off as the partial government shutdown continues. Museums and galleries at the nation’s capital will start closing in the middle of next week as funds run out.