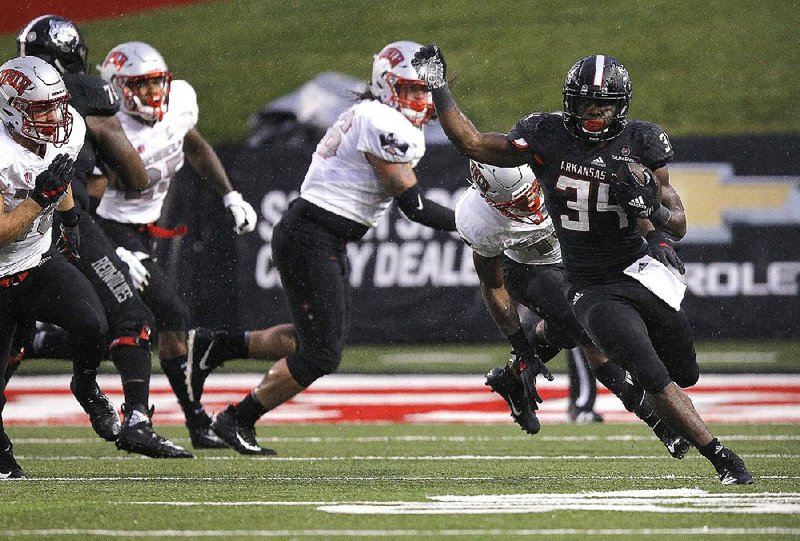 Freshman running back Marcel Murray (34) pushed teammate Warren Wand down the depth chart, but that hasn’t stopped Wand from showing Murray the tricks of the trade. ( Arkansas Democrat-Gazette / Thomas Metthe)

TUCSON, Ariz. -- Blake Anderson and Justice Hansen interjected without being asked a question.

"It's been great," said Wand, who accrued at least 700 rushing yards in his first three seasons at ASU before falling back to 652 this season. "Been different, you know."

ASU's coach and senior quarterback then took the microphone.

"I know you didn't ask me a question," Anderson said, "but I'm going to make a statement about that. I don't think people give credit enough for what Warren's been through and how he's handled the circumstances he's been in ... To be enough of a team player and truly put your ego on the side and teach another guy that is going to literally take reps away from you, that is just not easy to do."

"I'll back that up real quick," Hansen added, "just because I respect Warren ... Marcel, he's very talented. But, again, like [Anderson] was saying, I gave a lot of credit to Warren as well because he's been here since he stepped on campus, going through the plays, how things were supposed to be done. So Warren's got to be a part of this team's success."

ASU and Nevada will meet for the first time since 1999 in the Arizona Bowl at 12:15 p.m. Central today at Arizona Stadium. The game will be televised on CBS Sports Network.

"If not, it could have dismantled the football team very easily," Anderson said.

Murray, who was named the Sun Belt Conference Freshman of the Year, led ASU with 137 carries, 793 yards and 7 touchdowns and officially took over as the Red Wolves' first-string tailback a few weeks into the season.

Murray's 793 rushing yards are the most by a true freshman tailback since Lamont Zachary in 1996 (846 yards).

"I'm not surprised," Wand said of Murray. "As I like to look at it, he came in and did the same thing I did as a freshman. Kept his head down, just worked hard, took every coachable, teachable moment that he could and ran with it. And he's going to do big things."

The Red Wolves and Wolf Pack have one common opponent: UNLV.

Arkansas State defeated UNLV 27-20 on Sept. 22 to clinch a 3-1 nonconference record, its best record outside of Sun Belt play since 1995.

The Wolf Pack ended their season with a heartbreaking loss as Nevada watched a 23-0 lead against UNLV disappear. UNLV punched in the go-ahead touchdown with 2:34 remaining in the fourth quarter and ended Nevada's regular season at 7-5, including 4-1 in its final five games.

The game film provided ASU with a mini-study guide on the Wolf Pack.

"I know that's one of the games that we watched offensively," Anderson said. "I would have to think defense did, too. The last game they played is always a good benchmark. It did not look like them, to be honest with you. They played so well for five, six weeks in a row to have that game -- to lose that game late like they did. It just seemed kind of out of character for them."

Arizona Bowl Chairman Ali Farhang said Friday afternoon that the bowl was still selling tickets, but he expects ticket sales to near 40,000 for today's midday kickoff. Capacity at Arizona Stadium is more than 55,000.

The bowl set a paid attendance record last year with 39,132 in a game featuring New Mexico State and Utah State. 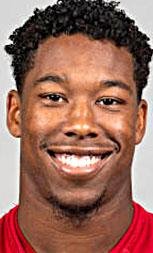 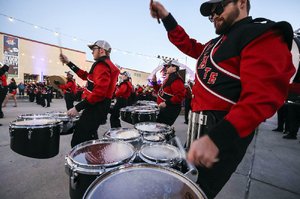 Photo by Mitchell PE Masilun
Members of the Arkansas State marching band perform Friday during a battle of the bands at the Arizona Bowl’s Downtown Block Party in Tucson, Ariz. 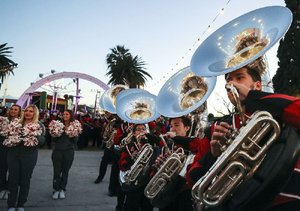 Photo by Mitchell PE Masilun
Members of the Arkansas State marching band perform Friday during a battle of the bands at the Arizona Bowl’s Downtown Block Party in Tucson, Ariz.
RELATED ARTICLES