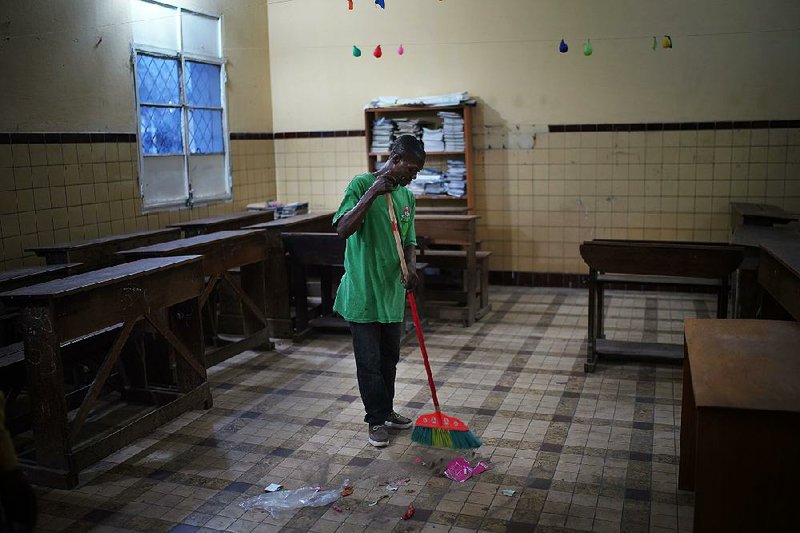 A cleaner in Kinshasa, Congo, prepares a school classroom Saturday to become a polling station for today’s presidential elections.

KINSHASA, Congo -- Congo's top archbishop on Saturday urged peace on the eve of the country's long-delayed presidential election, saying differences of opinion are no reason to "light the country on fire."

Hours later, the leading candidates failed to agree on a guarantee for a peaceful vote. The election commission chief has worried openly about rebels shooting voters waiting at the polls.

The archbishop of Kinshasa, Fridolin Ambongo, held a Mass in the capital attended by leading opposition candidate Martin Fayulu and by a representative of ruling party candidate Emmanuel Ramazani Shadary. They and sole female candidate Marie-Josee Ifoku held hands during prayer in a spirit of reconciliation.

"Unfortunately, some of our compatriots give the impression they want to hold the country hostage to violence," the archbishop told the congregation. "In no case will we permit these elections to become another opportunity to destroy Congo and shed the blood of Congolese who have bled too much for decades already."

He also criticized the surprise decision by Congo's electoral commission to bar residents of Beni and Butembo cities from voting because of a deadly Ebola outbreak, calling it a "denial of justice."

The decision effectively invalidates some 1 million votes, as those residents must now vote in March, long after the rest of the country votes today and after Congo's new president is inaugurated.

In the sharpest statement yet by health workers, the International Rescue Committee on Saturday said it was forced to suspend Ebola response work, accusing Congo's electoral commission of politicizing the outbreak.

"It is unacceptable that this disease is being used as a political ploy, putting aid workers in immediate danger," the group's vice president Bob Kitchen said, pointing out that the affected cities have large numbers of opposition supporters.

The election delay surprised many. The Health Ministry had said precautions were in place to allow people in the outbreak zone to vote, with electoral authorities involved in discussions. The opposition calls the delay the latest attempt by the ruling party to ensure that departing President Joseph Kabila's preferred successor, Shadary, is elected.

"Our brothers and sisters in Beni and Butembo say they feel betrayed and abandoned by their leaders and they are right in doing so," Kinshasa's archbishop said. The Catholic church in Congo has been an outspoken critic of delays in the election, which was meant to take place in late 2016.

The country faces what could be its first peaceful, democratic transfer of power as Kabila, who took office in 2001, steps aside. Some observers, however, fear further unrest.

On Saturday, the three leading candidates and the electoral commission could not agree on the terms of a guarantee for a peaceful vote.

Fayulu and another opposition coalition led by Felix Tshisekedi said the electoral commission should guarantee that voting will take place in all polling stations, including in Beni and Butembo and a third community, Yumbi, that recently had deadly ethnic clashes.

The opposition said the electoral commission should guarantee that all political parties' witnesses are allowed to monitor the election and that voting results will be counted by hand. Congo for the first time is using voting machines, which the opposition worries could open the door to manipulation.

Neither the electoral commission nor Shadary signed a guarantee with those conditions.

"You can see the collusion between the two," Fayulu said.

Shadary's campaign billboards far outnumber those of other candidates in Kinshasa, though he is largely unpopular there.

Shadary is under European Union sanctions for obstructing Congo's electoral process as interior minister and for a crackdown on people protesting the election delay.

The international pressure has annoyed Congo's government, and EU and other Western election observers have not been invited to watch today's vote.

"No one loves the ruling party candidate, but we already know what is going to happen. [Today's] vote is not credible and we will contest the results," said Ange Mvouessa, a civil servant who said he has not been paid in 18 months. He is backing Fayulu.

More than anything, he and others said they want peace in a country that has seen little of it.

Millions of people have died over two decades of fighting that began with the ouster of longtime leader Mobutu Sese Seko by a rebel coalition led by Kabila's father. Dozens of rebel groups remain active in the mineral-rich east and elsewhere.

"Congo is a blessed country, we have everything, but we are starving because of bad management," another Kinshasa resident, Thomas Basele, said.

Information from this article was contributed by Al-Hadji Kudra Maliro of The Associated Press. 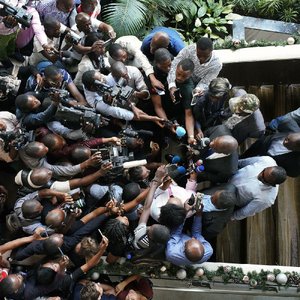 Photo by AP/JEROME DELAY
Reporters rush toward leading opposition candidate Martin Fayulu (right center) in Congo’s presidential election as he leaves a meeting Saturday in Kinshasa with other candidates. The meeting failed to yield an agreement on a peaceful vote in the long-delayed election amid fears of violence and voter suppression.