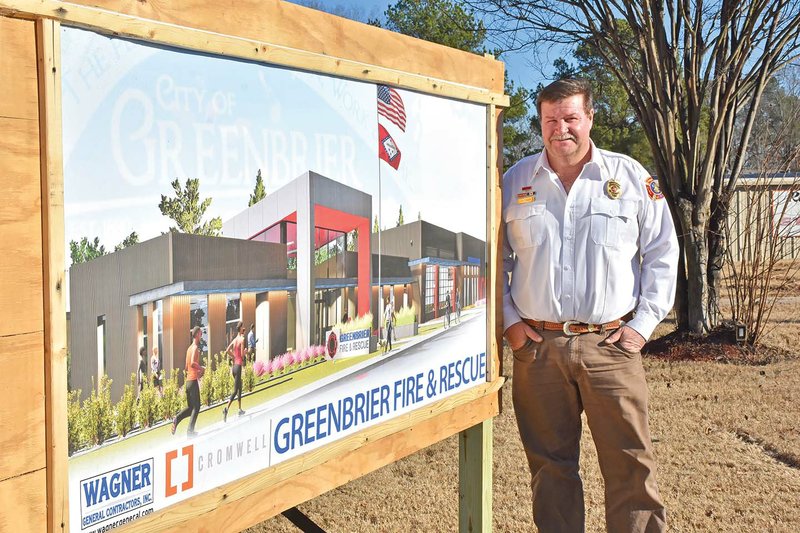 Greenbrier Fire Chief Tim Tyler said plans for the Greenbrier Fire and Rescue station include living quarters for firefighters as the city moves toward a full-time fire department. A groundbreaking was held earlier this month for the station, which is estimated to be completed by the end of 2019.

Greenbrier Mayor Sammy Joe Hartwick said two community-changing projects in the city should be completed in 2019 — a fire-and-rescue station and a park.

“We’re probably going to be going full bore on two construction projects at one time,” he said.

Greenbrier voters in February approved a half-cent sales tax to fund the projects — $2.2 million for the new Greenbrier Fire and Rescue Station and $3.8 million to build and equip Matthews Park. Of that amount, 3/8 of a cent is for debt service, which will sunset when the projects are paid off, Hartwick said.

Ground was broken Dec. 11 for the fire station, and a groundbreaking will soon take place for the 55-acre park, which is named for the late former Greenbrier Mayor Percy Matthews, who also taught school in the Greenbrier district in the 1950s, Hartwick said.

Both projects will be built by Wagner General Contractors Inc. of Memphis, Tennessee, which has an office in Searcy.

Hartwick said both projects are needed, but the park is near and dear to his heart. As a former maintenance supervisor for the Greenbrier School District for 34 years, he envisions how much children of all abilities will enjoy the new park.

He said the park, at 42 S. Broadview, will have handicapped-accessible playground equipment, “wheelchair swings and all kinds of stuff.”

“This is something the city really needs,” Hartwick said. “I guess with me working at the school as long as I did, I really have a soft spot for handicapped children, and they deserve to have the same opportunities as the rest of them.”

The park will also have walking trails, basketball courts and the city’s first splash pad. “Everybody will be excited about that,” Hartwick said about the water feature.

The park will also offer “a huge fishing pond — for our elderly,” he said.

“They said, ‘We really don’t have a place we can go and fish or handicapped-accessible fishing.’ It has a pond on it already; we’re going to get with the [Arkansas] Game and Fish Commission, and they’re going to help us keep [the pond] stocked,” Hartwick said.

“We’re also going to have a beautiful entrance to our new park on Ivy Street. We’re going to expand Ivy Street and make it a double entrance. It’s a one-lane road now,” he said.

Ivy Street will become a divided road with planters in the median, he said, and a Matthews Park sign will be erected on U.S. 65.

He said the park should be completed by this time next year.

“It’s going to be absolutely gorgeous,” Hartwick said. “People will be so excited about this park.”

A volunteer firefighter for the past 34 years, Tyler was named chief 1 1/2 years ago.

“When it’s done, we’re going to move everything into it and occupy it, then tear the old one down and build a parking lot,” Tyler said.

“It’s kind of been pieced together,” he said.

It can hold two city firetrucks, two rescue trucks, a tanker and a brush truck now. There are no living quarters for firefighters, who have been volunteer.

The new facility, designed by Cromwell Architects Engineers of Little Rock, will have seven bays, including 20-foot bays. It will accommodate “at least seven to eight firetrucks, and we’ll be able to put our ladder truck in it,” Tyler said. The ladder truck is housed at the south station now, one of five fire stations in the city.

The new station will have living quarters for firefighters, a kitchen and administrative offices.

“We’re already working toward the steps to a full-time fire department,” Tyler said.

Starting in 2018, Tyler said, a maximum of two firefighters were paid to be in the main station from 8 a.m. to 5 p.m. each day.

“Before that, it was totally volunteer,” Tyler said, adding that he gets paid.

Hartwick said the fire station will have a significant impact on the city.

“This fire station is going to be huge to us because it’s a fully functioning fire station. It has living quarters for us to prepare to get our full-time fire department instead of just volunteers,” he said.

“Some had the bunkhouse style, where you all sleep together,” he said. “The one in west Little Rock was beautiful, and it had their own separate rooms, and [Little Rock firefighters] loved it.”

He said the fire station should take seven to eight months to complete. Groundbreaking photos and the architectural drawing are available at cityofgreenbrierar.com.

“We’ll still keep our volunteer department. A lot of [the volunteer firefighters] have a regular job,” he said. “We’ll start putting on more firefighters when money is allocated by the city; we’re still a ways from that.”

But Tyler and Hartwick said the city will make great progress in 2019.