Arkansas grocery shoppers, low earners to get tax relief in ‘19 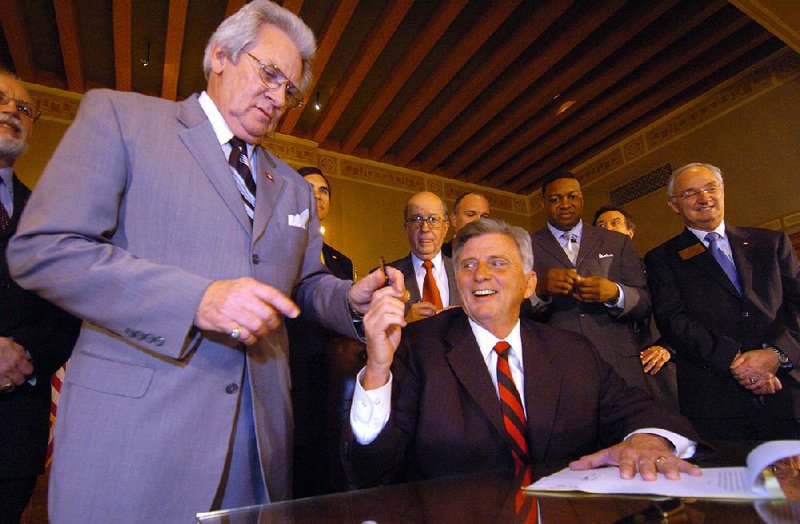 Then-Gov. Mike Beebe hands then state-Sen. Bobby Glover the pen he used on March 18, 2009, to sign a bill sponsored by Glover reducing the grocery sales tax to 2 percent. The tax dropped to 1.5 percent in 2011, and will be lowered to 0.125 percent starting Tuesday. “It will finish my promise,” Beebe said in a recent interview.

The new year brings tax cuts to Arkansans, one for grocery shoppers and the other for lower-income people.

On the first day of 2019, the state sales tax on groceries will drop from 1.5 percent to 0.125 percent and the individual income-tax rates for people who make less than $21,000 a year in taxable income will be cut.

The grocery tax cut is the final step of former Gov. Mike Beebe's bid to make good on a 2006 campaign pledge. He had proposed to incrementally trim the tax from 6 percent to 0.125 percent. Beebe served as governor from 2007-15.

"It will finish my promise," Beebe said in a recent interview with the Arkansas Democrat-Gazette.

The cut for low-income Arkansans will be the second in individual income-tax rates to take effect in recent years. They were proposed by Republican Gov. Asa Hutchinson and enacted by the Legislature.

Hutchinson -- who has been governor since January 2015 and will be sworn in for his second four-year term on Jan. 15 -- hopes to continue his tax cutting in the regular session that starts Jan. 14. The governor is asking for the Legislature's approval of his plan to gradually cut the top individual tax rate from 6.9 percent to 5.9 percent. 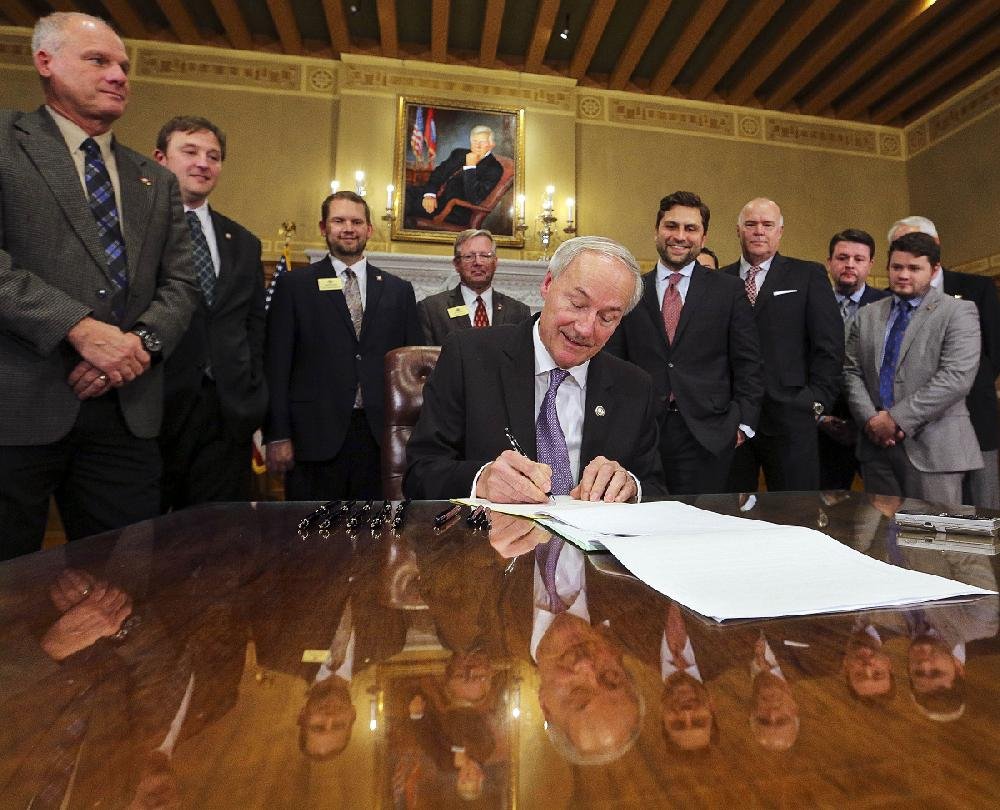 Gov. Asa Hutchinson signs a law in February 2017 cutting the income tax rate for Arkansans making less than $21,000 a year.

In a recent interview, Hutchinson provided projections that show the state would provide $158.5 million in total tax relief in fiscal 2020, between the grocery-tax cut, the tax break for lower-income people and his latest proposal. Fiscal 2020 starts July 1.

• $61.1 million from the first full fiscal year of the reduced grocery tax.

• $50 million from the first full fiscal year of the reduced income-tax rates on people who make less than $21,000 a year.

• $47.4 million from his latest tax proposal, based on a three-year phase-in.

State officials call Hutchinson's latest proposal the "2-4-5.9" plan because of the rates that ultimately would be charged at different income levels. People with taxable income up to $8,000 would pay a 2 percent rate; those with between $8,001 and $18,000 in income would pay 4 percent; and those making $18,001 and up would pay 5.9 percent.

"That to me is a story that people need to be reminded of and that's why we are being careful in phasing in the 2-4-5.9 plan. Over three years is the suggestion from the [Legislature's tax overhaul task force]. That's a big chunk of tax relief all combined in one year," Hutchinson said, referring to fiscal 2020. The governor hasn't decided whether he's going to go along with the task force's suggestion or stay with his original idea of introducing the income-tax cut over four years.

The governor's plan also would simplify the individual income-tax tables by cutting them from three to one. The plan also would increase the rates on some taxpayers, but the resulting increase in taxes paid by those people would be offset by boosting the standard deductions: from $2,200 to $6,800 for single taxpayers and from $4,400 to $13,600 for married taxpayers, according to state officials.

The current top rate, 6.9 percent, applies to people making at least $79,300 in 2018 taxable income, said Scott Hardin, a spokesman for the state Department of Finance and Administration.

In 2013, Beebe signed Act 1450 -- sponsored by Sen. Jason Rapert, R-Conway -- that was aimed at reducing the grocery tax rate from 1.5 percent to the 0.125 percent rate levied for conservation under Amendment 75 to the Arkansas Constitution. Voters approved the 0.125 percent sales tax increase in 1996, earmarking the money for conservation efforts to bolster the Game and Fish Commission and the state parks system.

Under Act 1450, the tax cut on groceries was contingent on the state paying off bond obligations that wouldn't end for years or resolving a decades-old lawsuit that required the state to pay millions for school desegregation efforts. If, together or separately, the bond and desegregation costs dropped by at least $35 million over a six-year period, the tax cut would kick in.

In January 2014, a federal judge gave final approval to a settlement that would end the annual payment of millions of dollars in state desegregation aid to three Pulaski County school districts after the conclusion of the 2017-18 school year. That settlement called for the state to pay $65.8 million a year to the districts over four years. The current school year is 2018-19.

State officials signaled in mid-October that the final grocery-tax cut would take effect Jan. 1, under Act 1450 of 2013. They estimate reduced tax revenue of about $30 million in fiscal 2019, which started July 1.

At Beebe's behest, the Legislature in 2007 cut the tax from 6 percent to 3 percent. That cut was projected to reduce revenue by $122.1 million in fiscal 2008 and $131.2 million in fiscal 2009, according to the Arkansas Democratic-Gazette's archives. State officials today describe the grocery-tax cut as the largest in Arkansas' history.

The largest previous cut had been an income-tax reduction enacted in 1997 when Republican Mike Huckabee was governor, state officials said. Billed originally as a $70 million cut, a computation by the state after the legislation was enacted concluded it amounted to a $90 million tax reduction.

In 2009, the Legislature trimmed the grocery sales tax to 2 percent at Beebe's request. The next cut came in 2011, when the tax dropped to 1.5 percent.

The grocery-tax reduction came up in the 2006 campaign for governor, when Beebe defeated Hutchinson. During the campaign, Hutchinson repeatedly criticized Beebe's plan to phase out the grocery tax. Hutchinson emphasized he wanted to eliminate it immediately.

During one debate in 2006, Beebe said, "What you have to do is increase the opportunities for state support of higher education. That's one of the needs you have to make sure you address before you haul off and suddenly eliminate all at once the grocery tax or any other tax. If you don't do that, if you don't take care of [public schools], if you don't take care of the needs of higher education, if you make a promise you can't keep, these voters will remember."

That led Hutchinson to respond, "I think Mr. Beebe has just explained why we'll never under his leadership have an elimination of the grocery tax."

Beebe recalled during a recent interview what Hutchinson said during their 2006 campaign.

"Well, obviously, I did it," Beebe said.

Asked about his comments in 2006, Hutchinson said in a recent interview, "That campaign was 12 years ago. ... [Beebe] won the election. But the essence is he supported eliminating the sales tax on groceries. I supported the same goal. He got it through the Legislature, to his credit. It was spread out over a long period of time and four years after I became governor, I am still absorbing that."

On April 25, 2018, the Legislature's tax overhaul task force voted to study the possibility of raising the grocery tax -- instead of allowing the final cut to take place -- and offsetting the increase with an earned income tax credit for low-income individuals. Leftover revenue would be used to cut income taxes, according to the idea that was pitched.

Officials for the conservative-leaning Tax Foundation and the liberal-leaning Institute of Taxation and Economic Policy told the task force that the state would be better off providing a targeted income-tax cut to low-income families rather than charging a 1.5 percent sales tax on groceries to everybody.

At that time, the state Department of Finance and Administration estimated that the 1.5 percent tax on groceries cut total revenue by $248.9 million in fiscal 2017, which ended June 30, 2017, including $190.6 million in general revenue.

But on May 3, Hutchinson made clear in a letter to the task force that he didn't support raising the grocery tax. Democratic gubernatorial candidate Jared Henderson and some Republicans had said they opposed the idea.

"It caught my attention, but I didn't think they would have the ability or the political will to do it and they didn't," Beebe said of the task force.

A tax overhaul task force co-chairman, Sen. Jim Hendren, R-Sulphur Springs, said in a recent interview, "I certainly didn't come with an agenda to go after the grocery tax.

"I came with an agenda that every single exemption is on the table and deserves scrutiny, whether it is politically popular or not. That's our job," he said.

"I think what you saw in the grocery tax is a situation [in which the proposal] is not politically viable," Hendren said. "There was opposition from the left and the right and [it's not worth] wasting your time on something that clearly is going to get no political support, so whether it is good policy or not is kind of irrelevant at that point." 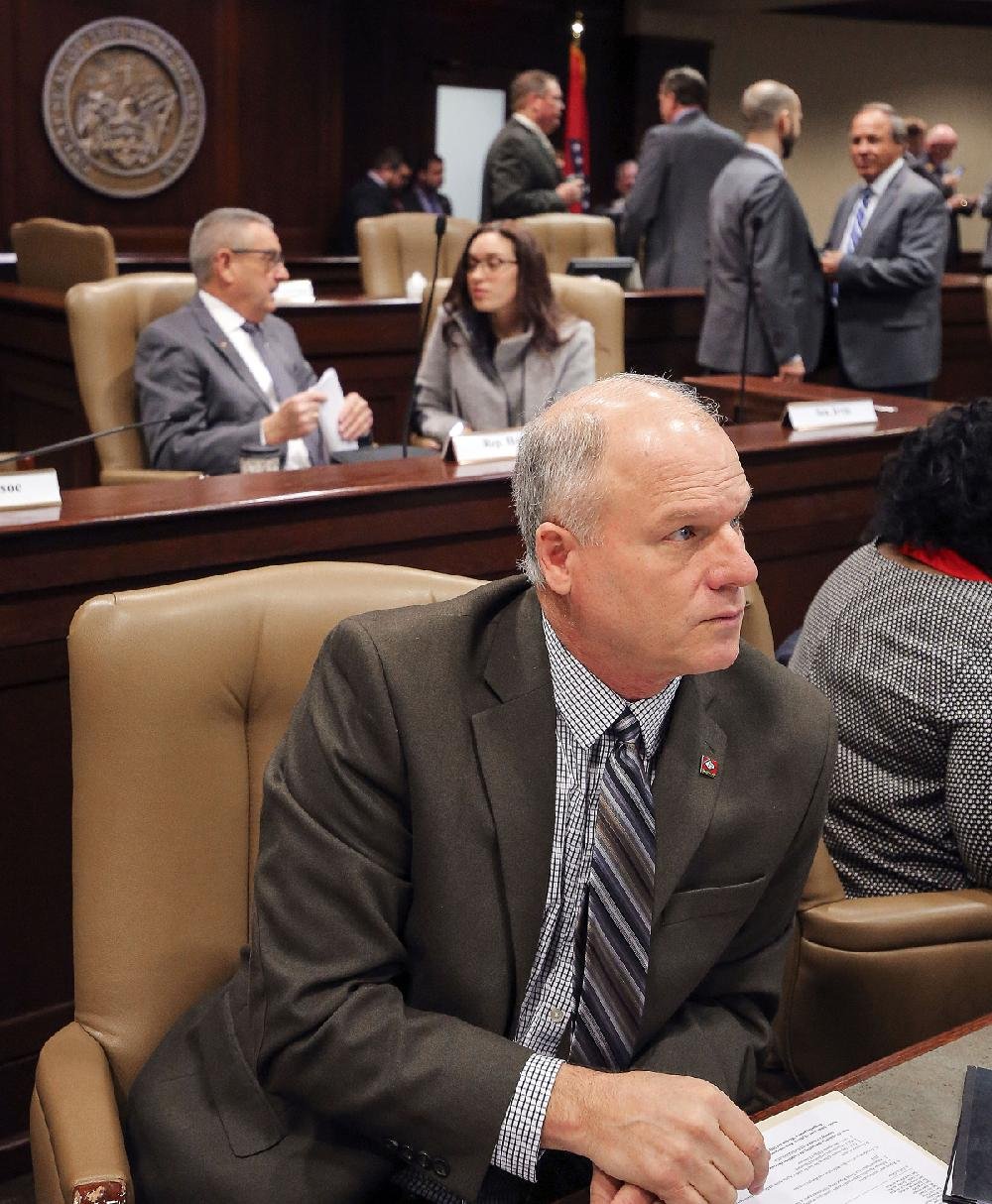 Sen. Jim Hendren of Sulphur Springs is shown in this file photo.

In February 2017, Hutchinson signed into law measures to implement his plan to cut income-tax rates for people with taxable incomes below $21,000. The effective date is Tuesday, the first day of 2019.

The tax cut is projected to reduce state general revenue by $25.25 million in fiscal 2019, which ends June 30, 2019, and $50.5 million each year thereafter, according to the Department of Finance and Administration.

The largest cut a single taxpayer could receive is $156 and a married couple could receive a $312, the finance department said in February.

Acts 78 and 79 of 2017 also created the 16-member tax overhaul task force to recommend further tax cuts for lawmakers to consider starting in 2019.

The creation of the task force helped placate lawmakers who also wanted to cut rates for those making more than $75,000.

During its last meeting on Dec. 12, the task force decided its top preference for an individual income tax cut plan is to implement Hutchinson's plan to reduce the top individual rate over three years rather than the four years he proposed.

The governor hasn't decided yet which option he prefers.

Hutchinson said he plans to present his "2-4-5.9" plan to the Legislature in the regular session starting Jan. 14.

The plan will require a three-fourths vote in both houses of the Legislature because it raises income taxes for some people, even though the increase would be offset by a larger standard deduction. The governor said state officials told him a small number of taxpayers would be affected in that situation.

"But everybody would have a net tax reduction because of the standard deduction," he said.

"But I think the fact that we are aligned between the task force recommendations and what I am pushing for gives it a lot of momentum," said Hutchinson. "... I campaigned on this and everybody knew this was coming and we really built the public support for it, so I am optimistic about it. But three-fourths [vote for approval] is always a challenge to get to."