Military widows, including those in Arkansas, still fighting to get annuity; with new Congress, work starts anew 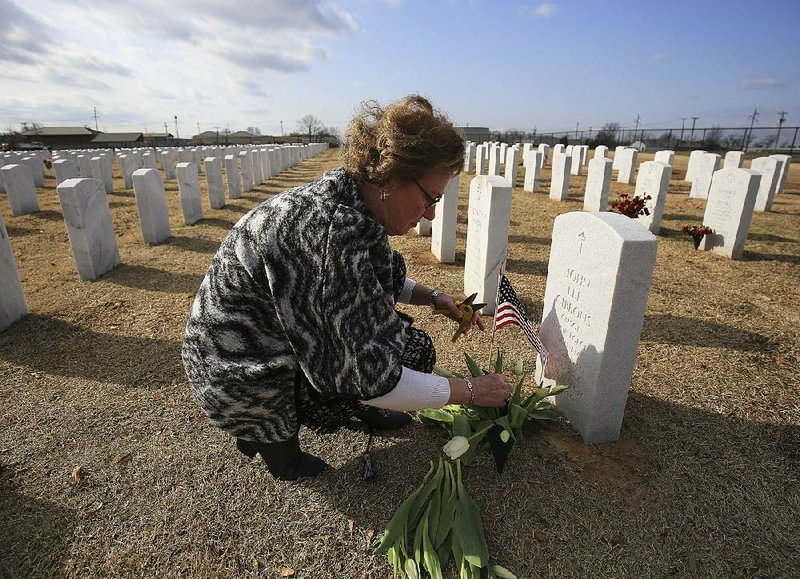 Elly Gibbons puts flowers and a flag on the grave of her husband, Air Force Chief Master Sgt. John Gibbons, at Fort Smith National Cemetery in March. Gibbons and other surviving spouses of veterans are trying to get Congress to repeal a law that blocks some annuity payments. Gibbons says she watches Congress year after year “totally ignore this issue.” ( Arkansas Democrat-Gazette / Staton Breidenthal)

Kathy Prout of Coronado, Calif., a Navy rear admiral's widow, has lobbied U.S. Senate and House members nationwide since 2004. Earlier this year, she got a face-to-face with President Donald Trump.

Their mission, shared by many veterans groups, is to persuade Congress to repeal a federal law that withholds a military-sponsored survivors' annuity payment from thousands of military widows and widowers.

The annuity -- which averages about $11,100 per year -- is a survivors' benefit that the widows' dead soldier, sailor and airmen spouses paid for with their lives and their money, the widows say.

A majority of congressional members, including all six currently representing Arkansas, has expressed support for efforts to restore the payments.

Now, military widows and widowers like Gibbons and Prout have watched another U.S. Congress adjourn while the law, popularly known as the "widow's tax," still stands.

"We are really disappointed," said Prout, founder of a Facebook group that includes 1,800 military surviving spouses. Now her group will have to start over, lining up sponsors and co-sponsors in the new Congress that convenes Thursday.

Gibbons says she cringes to hear congressional members and presidents speak glowingly of their support for military members and families.

She's heard Arkansas congressmen speak and write about "long-standing dedication to the warfighter" to veterans and to "the families who have made serving possible."

Then, Gibbons says, she watches Congress year after year "totally ignore this issue" of the payment penalty for military widows and widowers.

It blocks more than 65,000 surviving spouses, including more than 900 in Arkansas, from receiving payments from a Department of Defense's annuity program called the Survivors Benefit Plan (SBP).

The law affects only spouses of dead veterans, not children and other survivors. About 99 percent of those affected are women. Most are older than 62.

And most, like Gibbons, had husbands who signed up at retirement for the Survivor Benefit Plan to help the wives who might outlive them. They made monthly payments. Then the military retirees, like John Gibbons, later died of service-related illnesses. 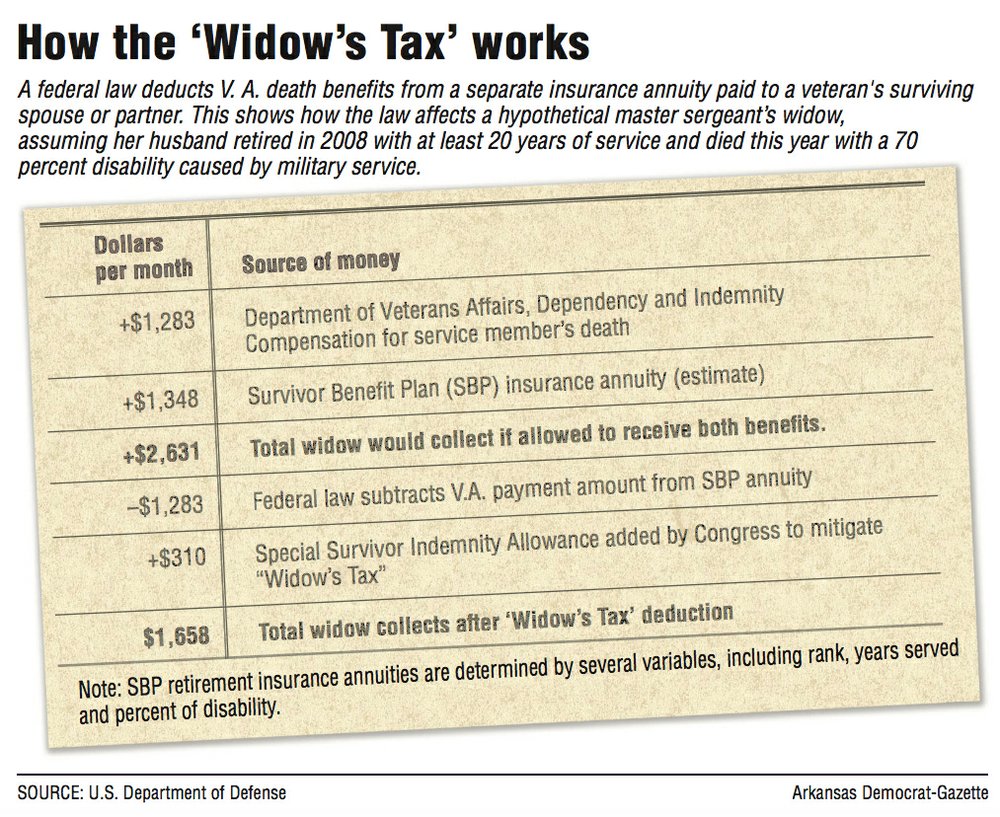 Information about how the ‘Widow’s Tax’ works

Fewer, like Prout, had husbands who died on active duty and automatically qualified their survivors for the SBP plan.

The catch is this: When military members die from service-related, disabling illnesses, or on active duty, their survivors also qualify for a tax-free benefit from the Veterans Administration.

For most recipients, that was a flat $1,283 per month for most of 2018, no matter the military member's rank or length of service. The payment is called Dependency and Indemnity Compensation (DIC).

It mandates subtracting the Dependency and Indemnity Compensation payment from any Survivor's Benefit Plan benefit. That's why the law is also often called the "SBP-DIC Offset."

For about two-thirds of widows affected, subtracting the Dependency and Indemnity Compensation payment erases the entire survivors annuity that their dead military spouses purchased for them. The military refunds what retirees paid toward the benefit but with no interest.

Receiving both benefits in full would ease the financial struggle that the widows face, they say.

An October report by the Congressional Research Service outlined arguments for and against the "widow's tax" law.

Those in favor say federal laws have long prohibited a person from receiving two benefits from the government for the same period of service.

"Because the federal government pays the full DIC cost and subsidizes the SBP coverage," it would be "inherently unfair to the taxpayer" for survivors to receive both payments, said the Oct. 1 report titled "Military Survivor Benefit Plan: Background and Issues for Congress."

Those who favor repeal say the benefits are two different types of compensation.

The report quotes the Gold Star Wives of America group's argument that the Survivors Benefit Plan is a "purchased annuities benefit, or type of insurance benefit." The Dependency and Indemnity Compensation is an "indemnity payment for death."

"The surviving spouses should be entitled to concurrent receipt of both," the Gold Star group said.

A federal program launched in 2004 allows military members to receive their retirement pay at the same time they get Veterans Administration disability pay, according to the Department of Defense website.

Articles in the Arkansas Democrat-Gazette in April of this year featured the Facebook group's efforts to persuade every congressional representative -- 435 in the U.S. House, 100 in the Senate -- to sign up and support repealing the "widow's tax."

Congressional lobbyists then said the practical problem was finding the will and the money to pay for it.

Cost estimates vary. The Congressional Budget Office in 2009 said repeal of the tax would cost the federal government about $7 billion spread from 2010-19.

Research by the Military Widows Facebook group, working with federal budget staffers, says the cost now is lower, about $5.3 billion over 10 years.

That's because Congress made permanent in 2018 a payment to widows and widowers designed to ease the SBP-DIC Offset's bite, a Special Survivor Indemnity allowance of $310 monthly.

But the bill stalled after being introduced Feb. 3, 2017, and never was taken to a vote, according to the record-keeping website congress.gov.

Gibbons, like many other survivors and veterans, views the "widow's tax" law as unjust and insulting.

Military men and women who died in action or in retirement because of their military service "laid down their lives for their country," Gibbons said.

"This Christmas, 65,000 widows and their families faced an empty chair, for some of us for the first time, others after decades. However, the void will always remain."

Print Headline: Military widows, including those in Arkansas, still fighting to get annuity; with new Congress, work starts anew