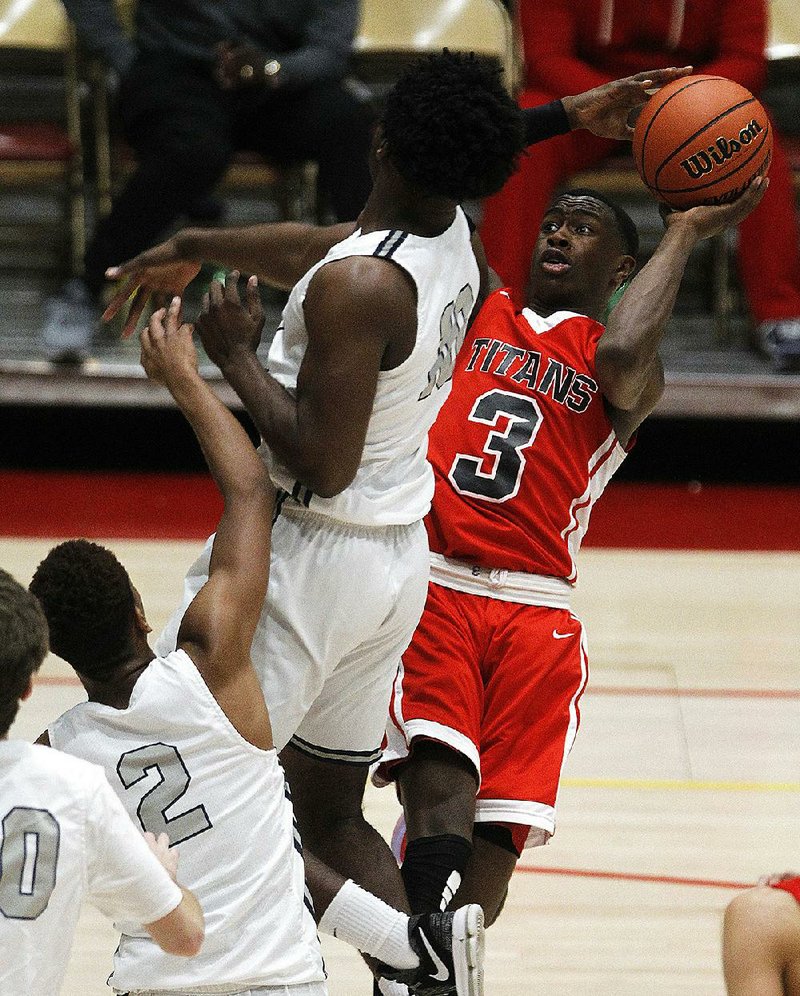 Jacksonville’s Devonte Davis (3) puts up a shot over D’Sean Perry (10) of Gulliver Prep (Fla.) during the second quarter of the Titans’ 72-68 victory in the semifinals of the King Cotton Classic. The tournament, which featured eight schools from seven states, was revived for the first time since 1999.

PINE BLUFF -- When it was announced in September that the King Cotton Holiday Classic would be returning to Pine Bluff after a 19-year hiatus, tournament director Sam Glover admitted his initial feelings labored somewhere between excited and skeptical.

Glover's enthusiasm centered around the fact that a once nationally recognized showcase would be reignited in his hometown. His skepticism revolved around whether the community would get behind the idea of bringing a dormant tournament back to a city in the midst of an identity crisis. But Glover, big on faith, said he knew everything would be fine. He was adamant about his excitement never waning throughout the process and indicated that whatever lingering doubts he had were erased as soon as fans started trickling into the Pine Bluff Convention Center on Thursday afternoon.

"I tell you what, it's been more than I could have ever imagined. ... it's so amazing," he said. "The anticipation and excitement that it generated has truly paid off. You're always gonna think about the what ifs when you bring something this big back to this city.

"But the response has simply been tremendous. Everything has been so positive, and I'm so elated to know that it's only going to get better."

Considering that the King Cotton hadn't been contested since 1999, the attendance for opening day was impressive, beginning at 2,000 for the opening game. The arena, which has undergone more than $500,000 in renovations, wasn't at capacity by any means. Those totals increased to over 4,000 when the host team took the floor in the day's third game.

"We've got fans from all over the place here," said Glover, who was an All-American track and field standout for the University of Arkansas. "But the thing I'm so impressed about is the local support. The No. 1 thing that I've heard over and over is 'thank you.'

"That really touched my heart because of Pine Bluff's perception. You see and read the negatives about this great city, but you rarely hear about the positive things that are going on. Just the overall support period, from [Go Forward Pine Bluff CEO] Ryan Watley to the Pine Bluff City Council to volunteers. ... there is so much in store for this city."

Go Forward Pine Bluff, which was created to help boost Pine Bluff's economy as well as improve the town's quality of life, has already made a positive impact by putting on several community events in the city and recently revealed a plan to revitalize the downtown area. An aquatics center is under construction and a new public library will follow. In November, voters approved a measure legalizing a casino which is scheduled to be constructed by 2020. Glover added that events like the King Cotton can only enhance the city's chances of transforming its stature.

"With everything that's going on, and now with the King Cotton back, it's the best example of what can happen to a city when we all come together for one common cause," he noted. "Pine Bluff is a beacon for this state. Through all the ridicule, all the negative things that are said, it's persevered, and things are changing.

"Back in the day, the King Cotton was second to none, and it was held right here. All of the other big-name tournaments that you see nowadays. ... the King Cotton is the granddaddy of them all. Those tournaments are using the blueprint that this great event provided. So it's only going to get bigger, only going to be better. Not to take anything away from those other tournaments, but we're not backing down. We're going to keep attracting top talent and team, and we're going to retake our position as the best basketball event in the country."