One woman created 8,000 posters of Arkansas plants in state collection

Herbarium volunteer sticks to it, poster by poster, year after year by JERRY BUTLER, SPECIAL TO THE DEMOCRAT-GAZETTE | December 31, 2018 at 4:30 a.m. 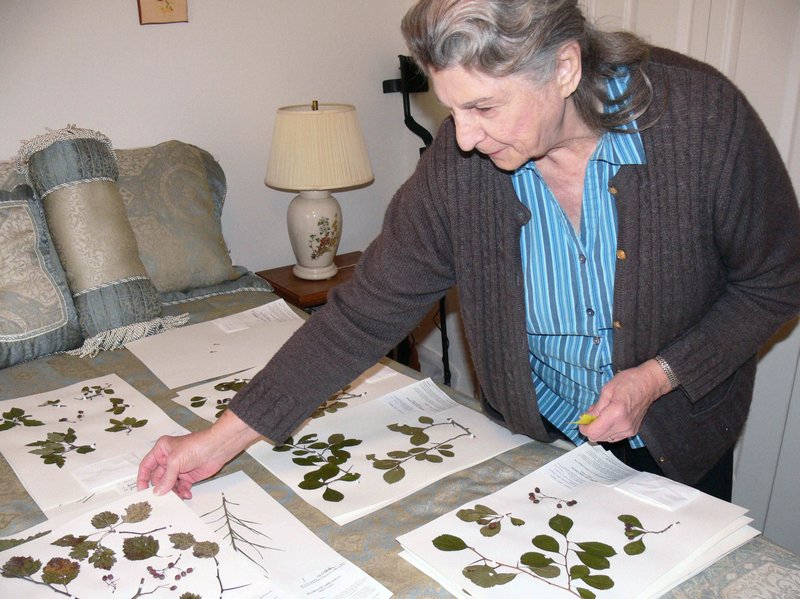 At home at Hot Springs Village, Barbara Baker spreads mounted plant specimens on a bed to dry before she and her husband return them to the Arkansas Natural Heritage Commission's Herbarium. (Special to the Democrat-Gazette/JERRY BUTLER)

Barbara Baker has prepared more than 8,000 plants as posters, for scientific inquiry.

Facsimiles of her work have hung as decorations in Gov. Asa Hutchison's office, and they adorn the halls of public buildings. They fill the shelves of the herbarium of the Arkansas Natural Heritage Commission — and yet her name appears nowhere on her work.

That is the way she prefers it. She's a volunteer for the herbarium, a library/museum of Arkansas plants.

Baker receives specimens of weeds, wildflowers, grasses, ferns, trees and shrubs that have been collected by people who traverse Arkansas' woodlands, prairies, neighborhoods and hills to find rare or unusual species in unexpected places. Some of the plant collectors are volunteers such as she, others are professional botanists.

The Arkansas Natural Heritage Commission confirms the identification of the plants, which have spent a few days in a deep freezer, to kill any insects that might chew on the leaves, flowers and seeds.

Each month or so for the last 11 years, Baker and her husband, Maury, have travelled to the commission in Little Rock from their home in Hot Springs Village to pick up cardboard boxes full of the specimens. The boxes may contain as many as 200 plant specimens, which have been gently pressed, dried and folded between sheets of newsprint.

After she returns the specimens to the commission, they are again placed in a freezer, for fear they may have been contaminated while in the Bakers' possession. After this quarantine, they reside in the commission's temperature- and humidity-controlled herbarium, (pronounced "herb-air-ee-um") ready to be used in scientific inquiry.

When the Bakers are working to mount plants on posters, much of their home becomes a studio/laboratory for the task.

Newspaper-wrapped specimens are placed along the kitchen wall below a window for easy visibility and access.

On the cabinet top and peninsular bar where food is normally prepared, she paints a sheet of glass with a thin layer of Elmer's Glue-All diluted with water. Then she places the specimen onto the glue so only one side of it gets sticky. Lifting it from the glue, she places it on stiff, 11½- by 16½-inch poster board.

She arranges each plant with its roots, stems, leaves, flowers, seed pods or fruits on the poster, leaving room on the lower right side for a scientific label.

Each specimen is identified with a label. The label contains the plant's scientific name, the common name, the date and time of the day it was collected, the name and number of the collector, the county where it was collected, a description of the location and usually the appropriate GPS coordinates.

It also bears the stamp of a qualified person who verified the identification, and in some cases, the results of DNA tests done on the plant specimen.

She covers the display with a sheet of wax paper (to prevent the glue from sticking in unwanted places), then presses on a sheet of foam a quarter-inch thick followed by a stiff piece of corrugated cardboard.

After that, the poster goes to the dining-room table where the glued specimens are stacked and pressed again under the weight of a box of sand and heavy books and left to dry.

After hours, or sometimes overnight, she separates the individual sheets containing the specimens and spreads them on a bed in a guest bedroom where they can dry a bit more.

Any loose particles of leaves or flowers that broke away from the specimen and could not be mounted go into envelopes that are sometimes attached to the poster boards.

She completes 10 to 20 specimens in a day. With Maury's help, she places them back into newspaper folders and the cardboard box in which she received them and returns them to the Arkansas Natural Heritage Commission, where she picks up another hundred or so plant specimens.

Unsatisfied to merely place these plants on posters with their scientific and common names, Baker views her work as an opportunity to learn. She tries to remember the information contained on the labeled posters that pass through her kitchen. She is quick to point out, though, that she has not retained it all.

She sees subtle differences among plants in the same family; she knows much about the types of habitat where these plants flourish. She is acquainted with the people who do the work of botany in Arkansas and the craft of floristics, which is the study of which plants appear where.

I have walked beside Baker (looking for birds mostly) in state parks and natural areas. Serious birders, I've observed, frequently become interested in the plants and insects that sustain them. I sometimes ask her about the plants growing at our feet. She answers most of my questions, and can recall a plant's supposed medicinal value, the origins of names and appearance in other seasons.

She knows the leaves, flowers and fruits of many plants. She sees herself as a student, not a scientist or teacher. Like all good scientists, she understands that the diameter of her knowledge is a measure of the circumference of her ignorance. She talks much more about what she has yet to learn than about her considerable storehouse of knowledge.

The work Baker does is not high-tech. It requires a good bit of time, a steady hand, an artistic eye and commitment to detail. Theo Witsell, botanist/ecologist for the natural heritage commission and director of its herbarium, trained her and other volunteers from the ranks of the Arkansas Native Plant Society to mount the specimens in 2003.

"From among that cadre of volunteers I saw right away," Witsell said, "that she would excel above others at the work."

Witsell explained that in 2005 the herbarium began trying to obtain certification with the Index Herbariorum, the official database of worldwide herbaria maintained by the New York Botanical Garden. One requirement for recognition was that the herbarium include at least 5,000 processed specimens, and it had cataloged only about 2,000.

"We had collected many more species that were as yet unprepared for study in the way botanists prefer, but we didn't have time to do the work. Barbara Baker is the person who got us over the hump," he said.

Just before New Year's 2010, the herbarium reached 5,000 processed specimens. "Now we are certified, have more than 14,000 specimens," Witsell said. Because it is a certified herbarium, whenever a specimen from the collection is cited in a scientific publication, the acronym "ANHC" is used.

[RELATED: Heritage Commission’s Herbarium to be available to the public online.]

Baker has prepared more than half of all the specimens in the herbarium.

"We have attempted to recognize her in some public way for her valuable contribution, but she has deferred," Witsell said.

Barbara Baker is a Louisianan by birth, daughter of a dredge boat captain.

She met Maury at New Mexico University in Albuquerque, where she studied anthropology. After marriage, she dropped out of college to work while Maury finished an undergraduate degree in engineering and later a master's at Purdue University, in Indiana.

Eventually they settled in Seattle where they reared two sons. After a long career with Boeing, Maury retired. By then, both of their adult sons were engineers with families, one in Houston, the other in Atlanta.

"We had no real roots in Washington," she said. "I got out a map and looked for a spot midway between our sons and grandchildren. Hot Springs Village was it.

"I had never heard of the Village, but it's been a good decision. Arkansas is a good place for us."

Soon after moving to the Village in 1995 they joined the local Audubon Society. It was at Audubon meetings she learned about the Arkansas Native Plant Society and the need to document plants and their distribution.

Baker was interested in plants before they came to Arkansas. She says her interest was germinated by blisters on her hands. In 1993, she was trying to maintain her lawn in Seattle, which was plagued by an invasive species of clumping grass.

"I dug and shoveled it out until my hands were literally torn up," she says. "As soon as I got it out, it would sprout up again. I finally decided that there had to be a better way."

That better way was to join a Master Gardeners program in Seattle, where she began learning about gardening and plants. She was a fast learner. That invasive grass, the one she now knows by its scientific name Poa annua, was her introduction to flora studies.

But she maintains bitter memories of the species.

Jerry Butler writes frequently about Arkansas birds and the people who enjoy them. He welcomes stories at