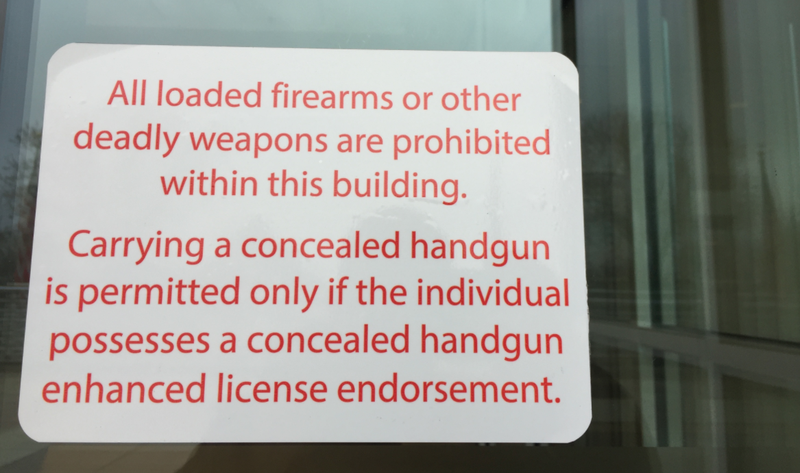 In Little Rock, signs have appeared on some public buildings, like this one at the Victory Building near the Arkansas Capitol, warning that guns are still off limits, except to those with the required permits. ( John Moritz)

More than 70 Arkansas concealed-carry instructors began receiving certificates this week authorizing them to teach a new "enhanced" curriculum, and it will likely be this month that certified gun owners can take weapons to previously prohibited places such as bars, college campuses and the state Capitol.

Two of the instructors who passed the test said Wednesday that they planned to start offering the classes next week and already had lengthy waiting lists of gun owners. They said they planned to offer the class as a single eight-hour session, allowing current concealed-carry licensees to apply for "enhanced" licenses the same day they start and complete their training.

Once they have their "enhanced" permits in hand, gun owners will be able to carry weapons in previously gun-free locations.

Meanwhile, those locations are putting the finishing touches on their plans to accommodate armed citizens.

The University of Arkansas, Fayetteville, is operating with the stance that the new gun rules are "fully implemented," university spokesman Mark Rushing said.

Previously, the campus banned firearms except for those carried by law enforcement officials. Now, students and faculty members who obtain the appropriate certification may carry concealed handguns to classes -- though guns are still off limits at athletic events and in some buildings. He said signs are being put up making those rules clear.

"We don't know when the first permit holder will arrive on campus with a concealed handgun," Rushing said. "Our message is [the law] is fully implemented."

In Little Rock, signs have appeared on some public buildings warning that guns are still off limits, except to those with the required permits.

Officials at the Capitol, however, declined to say how security plans have changed.

The new strata of holders of concealed-handgun permits was created by Act 562 of 2017. The law was the result of a policy debate that took up much of last year's regular legislative session, as pro-gun lawmakers debated among themselves how far to go in expanding areas where Arkansans could legally carry guns.

By completing eight hours of additional training, including two hours of live-fire shooting, concealed-carry licensees can receive an endorsement on their cards allowing them to carry guns in many public places that had previously banned firearms.

The new law also has drawn consternation, not only among "gun sense" groups, but from some concealed-carry instructors who say there should be no training required to carry a gun into public places.

One holdout among the instructors was Jan Morgan, the Hot Springs gun store owner who said she will challenge Hutchinson in the Republican primary.

Morgan said in a statement that she was not planning to teach the enhanced concealed-carry class, calling the legislation a "convoluted mess."

Arkansas State Police rules require all of the state's roughly 1,000 concealed-carry instructors to become certified to teach the enhanced course within six months, or lose their teaching certification. Some lawmakers have proposed tweaking the law during this month's fiscal session to allow instructors to keep their certification if they don't teach the enhanced course.

"I think the number of those that are going to opt out or not take the course are probably in the minority," said Thomas DuPriest, an instructor at Shoothouse USA in Conway.

DuPriest said he plans to offer his first class on Feb. 8 to members of his range, and after that will open classes to the 300 people who have already signed up.

For $150, DuPriest said his course will include a 50-round "warm-up" before applicants attempt the 50-round shooting test. They'll have up to three attempts at the shooting test, he said, before they have to wait 90 days to take it again.

DuPriest said he did not think poor marksmanship would be an issue.

"The assumption is that you've shot before and stayed proficient," he said.

Another instructor planning to offer the course, Aaron Acklin of Little Rock, said he will offer private classes to individuals or small groups for around $140. Acklin said between 50 and 60 people have already signed up, and he plans to start with a "small-knit group" as soon as this weekend.

For the classroom portion of the course, Acklin says he plans to go more in-depth on the state-mandated subjects, such as nonviolent dispute resolution.

"These are state minimal requirements; they're not good enough," Acklin said.

Once an applicant has passed the course and submitted paperwork to the state police, the agency is prepared to issue the enhanced licenses, spokesman Liz Chapman said in an email.

At the Capitol, officials remained mum Wednesday when asked about their plans to accommodate lawmakers, staff members and tourists who carry concealed weapons. (During the same session in which lawmakers passed Act 562, they approved legislation exempting state Capitol security plans from public-records requests.)

The state Capitol police chief on Wednesday referred questions to the secretary of state's office, which manages the building and oversees the police. Chris Powell, a spokesman for Secretary of State Mark Martin, declined to give details of how police would screen for concealed weapons, or whether there were certain areas that will remain off limits, such as the House floor. The building has metal detectors but those with Capitol ID badges can skip going through the detectors.

Powell said only that there is a "policy in place," and that Capitol police have been briefed, but he did not elaborate.

Private establishments where concealed guns will soon be allowed, including bars and churches, may still prohibit weapons but must give written or verbal warnings to carriers that such rules exist.

Dennis Lee, the chancellor for administrative affairs at the Catholic Diocese of Little Rock, said the new law changed nothing at the area's Roman Catholic churches: Guns are still banned.