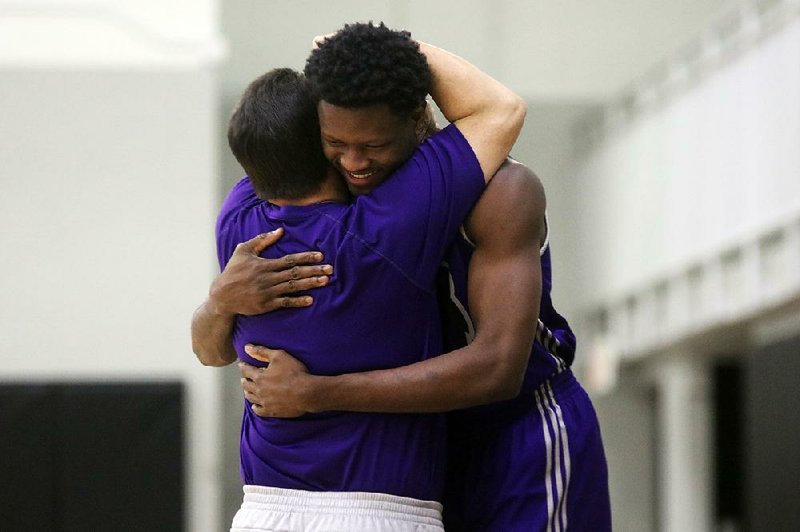 Central Arkansas freshman forward Sikiru Shittu hugs a member of the Bears’ staff during practice this week in Conway. Shittu’s heart stopped during a preseason scrimmage in September. This week, doctors cleared Shittu to jog.

Sikiru Shittu remembers when he died.

Now, he's trying to live without knowing why.

Shittu sits at the end of the bench on game day, his 6-9, 209-pound frame bound in team warmups. The University of Central Arkansas freshman forward has stopped dressing out in full uniform, his coach said, because it hurt knowing he couldn't play.

The court will clear, the day will pass, and Shittu will fully dress out for practice, step to the free-throw line and do one of the few things his doctor will allow.

Eight. Nine. Ten made free throws in a row.

The shots go up right next to the bench where his heart stopped during a preseason scrimmage Sept. 22, when he was revived by a defibrillator to find out his brief death was a medical mystery.

After tests at Conway Regional Hospital did not diagnose his heart's malfunction, Shittu was transferred to Baptist Health Medical Center in Little Rock, where a defibrillator was implanted into his chest in case his heart ever stopped again.

Shittu's recovery has been gradual, and only after an appointment Thursday did Shittu's doctor clear him to jog.

Shittu left Nigeria at age 15 to pursue a basketball career that could support the family he left behind. Now his career, and his life, is a question mark by something he does not understand.

"I don't know what to do and what to not do," said Shittu, 19. "I'm just trying to do everything that's gonna help for that to not happen again."

The first time Shittu played basketball, he said, he was awful. Couldn't shoot. Couldn't make a layup. When the neighborhood kids in Alagbado, Nigeria, picked teams, they learned to leave out the 6-7 14-year-old nicknamed "SK."

Shittu had spent his childhood playing soccer in Alagbado's dirt streets. He still has the scars on his shins from when he and his friends jumped over a brick fence to play soccer in an open field.

Afterward, Shittu would scuttle to the hollow brick house where his mother, Mulikatu, lived.

There was a bedroom, a parlor, no air conditioning, and when the spotty electricity flickered off, Shittu would have to open a window to let the sunlight in.

Shittu would later ask his new American friends: "Does your light go off?"

One day the neighborhood kids picked Shittu, and the light came on. He received the ball, jumped and slammed the ball through the rim.

"I still couldn't shoot," Shittu said. "But that's when I started gaining attention."

He registered with a local club team, Warlords, and his coach, Peter Akindele, connected Shittu with a friend, Jack Whitehead, a director on the board of Hoops Care International. Whitehead's organization, which is based in Philadelphia, provides opportunities for international youth. Whitehead directed Shittu to Providence Academy in Rogers, which was just starting its international student program.

Austin Bivens and his wife, Lisa, had told Providence Academy they would host the first student.

In September 2013, Shittu arrived in America.

"He really became my son," said Austin Bivens, who coaches boys basketball at Providence. "He really is our kid."

Still raw in his basketball talent, Shittu played in his first intersquad game three weeks after his arrival.

"We drove home that night," Bivens said. "And he goes, 'Well, sir, that was very fun. I've never done that before.' I said, 'You never played a game before?' He said, 'Never played inside.' "

"Fast forward," Bivens said. "We now think, with all that happened, being 17 hours away [at Southern Illinois]? They may have been great. But we were glad to be there for him."

Shittu said he doesn't want to see the security film of his death, if it exists, but if he could see it on film he "would actually have the experience of what happened."

It was the last open gym of the summer session. The Bears were scrimmaging each other, and the coaches, by NCAA rule, were not allowed to be around the players.

Shittu remembers that his team lost. He high-fived teammates on his way to the bench. Then, as he was watching the next game, his vision went blurry and he felt dizzy.

The next thing he remembered, someone was yelling in his face: "Wake up SK. Wake up."

"It just felt like, you know, when you're really tired?" Shittu said. "And you just lay down and fall asleep? That's what it feels like."

When Shittu was transported to the Conway hospital, his teammates filled in the details: Junior forward Otas Iyekekpolor, a biology major, had run to the hallway and grabbed the defibrillator, catching the attention of athletic trainer Allison Susa. Iyekekpolor returned to Shittu, who had collapsed on the floor. Susa shocked Shittu with the defibrillator. Someone had called 911, and the paramedics arrived.

UCA Coach Russ Pennell, who had been on his way to watch his daughter's drill team at a Conway High School football game, arrived to see his players kneeling on the practice gym, praying.

The whole team followed the paramedics to the hospital.

"Two to three hours later, SK was talking like his old self," Pennell said. "He was a kid again."

Shittu Skyped with his mother in Nigeria.

Someone fetched him a Subway sandwich.

A week passed, and Shittu was released from the hospital with a new defibrillator and no diagnosis. He was instructed to keep his heart rate low and that he would be re-evaluated in six months.

The defibrillator went off suddenly a few months ago, and Shittu's doctor decided it was a malfunction and raised the defibrillator's setting to allow a higher heart rate.

"We're at the mercy of the experts," Pennell said.

Thatch Unruh, his roommate and a junior on the team, said he and Shittu talk about his condition often. Shittu tries to piece it together. Why it happened. How he was going to deal with it.

Shittu believes he overworked himself, mentally and physically. He played basketball every day during the summer, and sometimes he would spend three hours in the gym, training with the UCA football players.

"I feel like I didn't get enough rest," he said. "I was just worried so much about this season, and that I'm going to have a good year, and to just be ready and be better before the season starts."

Now, Shittu is UCA's "Enthusiasm Coach" -- a job Pennell said he created when Shittu told Pennell he didn't feel like he was earning his scholarship and wanted to help the team somehow.

Shittu smiled when Pennell explained the duties: "Keep us pumped up. Help us catch fire on the bench."

Shittu hopes to play basketball again, but he is prepared if that day never comes. 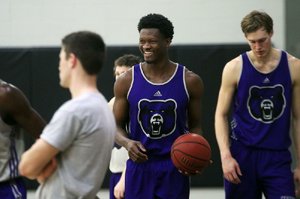 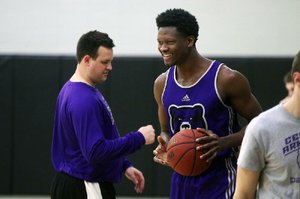 Photo by Photo courtesy of UCA sports information
Central Arkansas’ Sikiru Shittu was cleared to jog Thursday after his heart stopped during a preseason scrimmage on Sept. 22. He was revived by a defibrillator.