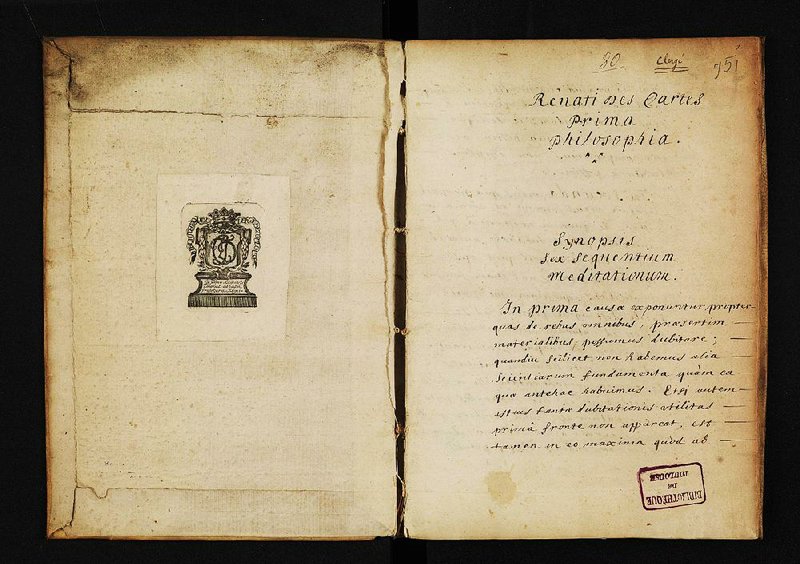 Scans are shown from a draft of Rene Descartes’ Meditations on First Philosophy. The draft predates the 1641 printed edition.

FAYETTEVILLE -- A University of Arkansas, Fayetteville philosophy instructor has won a National Endowment for the Humanities fellowship after hunting down an elusive early copy of a renowned text by 17th century philosopher Rene Descartes.

Jeremy Hyman was the only scholar from Arkansas to last year win one of 74 fellowships from the independent federal agency, receiving $50,400 to support work on translating a pre-publication draft of Descartes' Meditations on First Philosophy.

In 2016, Hyman traveled from Arkansas to the city of Toulouse in southern France based on nothing more than an interesting description in a municipal library's online catalog, he said.

"Basically, I really had no idea what it was going to be," Hyman said.

By the time of the trip, he'd already spent more than 15 years searching on-and-off for unpublished Descartes materials. The famed philosopher's Meditations on First Philosophy ranks among the top 50 most commonly assigned texts on U.S. college campuses, according to the Open Syllabus Project, which gathers data from class syllabi.

Before the book's 17th century publication, Descartes asked another scholar, Marin Mersenne, to help by sending manuscript copies to leading thinkers of the day.

"He wanted to collect objections from various colleagues in the period," Hyman said, with those objections -- and Descartes' replies -- included with the printed edition of 1641.

But no such copies had turned up for modern scholars, Hyman said.

"What I found is a copy that Mersenne had made," Hyman said, adding that the text, written in Latin, is "pretty close to the finished version."

Hyman said that before his visit "no one realized" the manuscript's origins.

"They thought maybe it was a later copy made by someone," Hyman said.

Daniel Garber, a scholar of 17th century philosophy and science at Princeton University, called Hyman's find "a marvelous historical document to have."

"This one really does seem to be one of the ones that we know had been copied at a particular moment and sent off," Garber said, adding that while such copies were known to have been made, "nobody had ever found any of them."

He credited Hyman with "sort of relentlessly pursuing" undiscovered material, adding that it's possible other draft copies may yet be found.

The National Endowment for the Humanities received 982 applications for the most recent round of fellowships, Paula Wasley, a public affairs specialist with the agency, said in an email. The 2017 fellowship awards totaled $3.5 million and are open to researchers, teachers and writers, she said, with evaluations based on factors that include the "intellectual significance" of the proposed project.