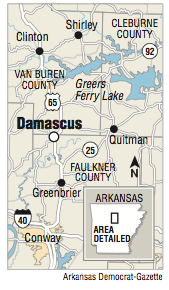 A map showing the location of Damascus.

The decision by Judge Chris Carnahan in Faulkner County Circuit Court was in response to a motion by the town of Damascus. The town of roughly 400 residents is suing to overturn sanctions against the community that lies along U.S. 65 in Faulkner and Van Buren counties.

The judge left another argument in the lawsuit open for further arguments -- whether the Arkansas State Police's calculations that led to the sanctions were done correctly.

"It's going to be your burden," Carnahan told Damascus City Attorney Beau Wilcox. "You have to show where their numbers are wrong."

Carnahan said, however, that any constitutional problems with the statute should be addressed with the Legislature rather than his court.

"I'm not going to legislate" in terms of what the Arkansas General Assembly can require of cities, the judge told Wilcox and Assistant Attorney General William Bird. The constitutional question is "moot," the judge said.

"The constitutional arguments were the primary focus of the challenge to the state," Bird said after the hearing. "That was a big hurdle to get over."

Wilcox said the city faced "an uphill battle to get the decision" it wanted. But Wilcox said the remaining argument -- application of the statute based on calculations required under the law -- are "a real critical component" of the case.

Wilcox said he was not accusing anyone of intentionally submitting faulty statistics but said the data "might be a little skewed."

Carnahan also rejected Wilcox's argument that the law intends for the city attorney rather than the prosecuting attorney to decide sanctions once the prosecutor has found a city to be in violation of the law.

"You also prosecute under the authority of the prosecuting attorney," Carnahan told Wilcox. "You're his deputy."

In May, Cody Hiland, then the 20th Judicial Circuit's prosecutor, ordered the Damascus Police Department to quit patrolling U.S. 65 and a state highway running through the town, effectively until the end of 2018.

Officers from Faulkner and Van Buren counties' sheriff's offices and the state police began patrolling the highways after Hiland's ruling. After one year, the city may ask the current prosecutor for a review of any public-safety concerns resulting from the decision. Wilcox said after the court hearing Wednesday that the city plans to do that.

In arguing the statute's unconstitutionality, Wilcox has said the term "traffic offenses" used in the statute was ambiguous and that the law failed to give cities due process. Bird countered that other statutes also use that term rather than being more specific "because it's an easily understood phrase" and not ambiguous.

A city is in violation of the state speed-trap law if its revenue from traffic fines and costs related to its traffic citations exceeds 30 percent of the town's total expenses, less capital expenses and debt service, in the preceding year. A city also is in violation if more than 50 percent of its misdemeanor tickets issued on a state highway are for people driving 10 mph or less over the speed limit.

Wilcox has said the Damascus city clerk had determined the revenue figures cited in Hiland's report included some fines, fees and costs that resulted from neither speeding citations nor violations of city ordinances.

Wilcox said the figures incorrectly included revenue from fines and costs associated with nonmoving violations and other offenses not associated with speeding -- warrants for failure to appear in court later, for instance.

While prosecutor, Hiland said the state police and the state Legislative Audit Division had examined Damascus data three ways and for two time periods, 2013-14 and 2014-15. He said all three methods found the citations had exceeded the 30 percent threshold.

City revenue from traffic fines and costs above the 30 percent level ranged from $77,836 to $298,449, depending on the year examined and the method of analysis, according to a report by Hiland.

U.S. 65 carries traffic to Branson, the Buffalo National River and other Ozark attractions. About 2 miles of the highway runs through Damascus.