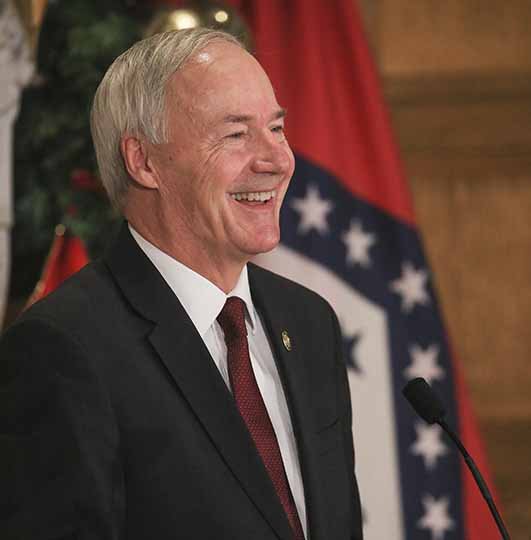 Gov. Asa Hutchinson appeared on a Little Rock morning radio show Friday, during which he commented on the station's annual ranking of local female broadcasters that will continue despite recent criticism.

The "Babe Bracket" on 103.7 The Buzz drew national attention after a Feb. 1 blog post by Austin Kellerman, news director at NBC affiliate KARK-TV and Fox affiliate KLRT-TV, called for the end of the contest. His statement was covered by publications including The Washington Post, the Los Angeles Times and Slate.

Kellerman argued that the contest, which pits female journalists against each other in four rounds and gives listeners the opportunity to vote, is "blatant objectification."

On Friday's show, Hutchinson said: "It's like y'all have some fun and everybody enjoys it.

"We've got to be careful not to be too politically correct," he added. "I think everybody knows the good spirit that it's in."

"I've also learned they can dish it out, too," he said. "They've got a pretty big microphone themselves."

Hutchinson was asked about the bracket during a brief interview as the station broadcast from the Make-A-Wish Wish-A-Thon/Radiothon fundraiser in North Little Rock.

One of the show's hosts, David Bazzel, took to Twitter to thank Hutchinson for his "positive and supportive words."

The contest will continue for its 21st year in March, Arkansas Online previously reported.

Hutchinson later said in a statement that his comments on the show were not "an endorsement of any contest that is based upon looks."

"My point was simple — I believe the hosts of the show are well-intentioned and their long-running contest was always done without any malicious intent," he said. "All women should be treated with respect, and any measurement of workplace success should be based upon talent and performance."

Hutchinson is seeking re-election this year.

Jared Henderson, Hutchinson's Democratic challenger, said the governor's defense of the contest shows he is "stuck in the past."

"We know radio shows have to be entertaining, but in 2018 it's time to draw a principled line in the sand to oppose sexist sentiments like this one being communicated in the workplace, on the radio or anywhere," Henderson said in a statement Friday afternoon. "We should aim high in how we treat women in our state and not encourage lowest common denominator behavior."

Jan Morgan, a Hot Springs gun range owner who has announced she will challenge Hutchinson in the GOP primary, said she wouldn't weigh in on the Babe Bracket.

"I'm focusing my time and attention on issues that hard working Arkansans actually care about, instead of weighing in on a senseless and sophomoric radio contest like this one," Morgan said.