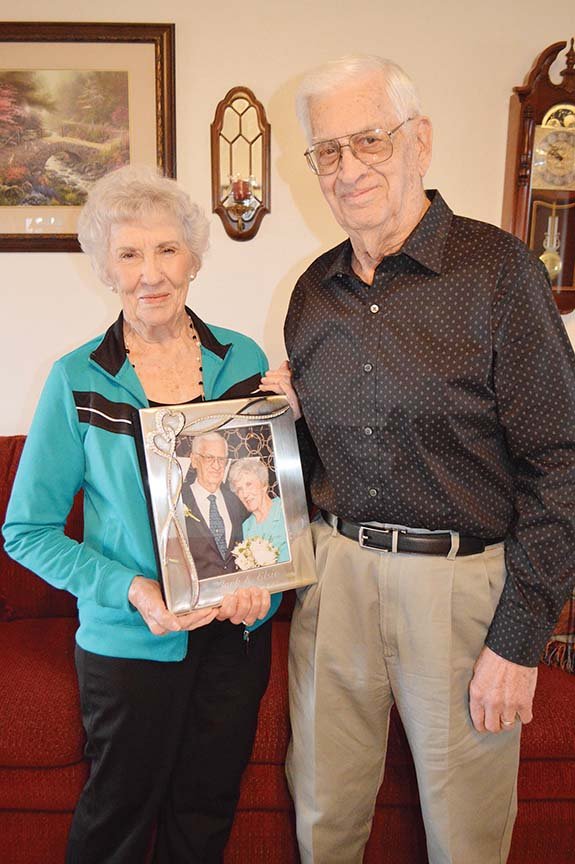 Newlyweds Elsie and Jack Grimes of Guy hold an album of photos from their Sept. 23 wedding. They met on a blind date, arranged by a mutual friend, and were married four months later. They each had been happily married for more than 60 years, and their spouses died within nine days of each other. Matchmaker Donna Treece of Guy said, “The first little date, they seemed very comfortable together. The next thing I know, they’re getting married.”

GUY — Newlyweds Jack and Elsie Grimes of Guy met on a blind date and got married just four months later.

That might seem like a quick courtship, but at ages 92 and 83, “you know what you want,” Elsie said.

“We’ve been so happy,” Elsie said. “We have so much in common. We love to do the same things. We like to go to church. We like gospel singing; we went to one Saturday night.”

A Navy veteran, Jack grew up in Enola and is a former two-time mayor of Mayflower. Elsie, a Texas native, worked at Safeway

and Ideal Grocery stores most of her adult life. She’s been in

Jack and Elsie were both happily married for more than 60 years to their former spouses, who died within nine days of each other in 2014.

Elsie’s first husband, Arkansas native Harvey Loman, pursued her when they met in Texas, and he charmed her mother one day into letting him drive Elsie home from the skating rink. She was 18 when they married, and they enjoyed 61 years together until he died of a heart attack. They had two children.

Jack,and his first wife, Ruby, met after he got out of the Navy. When he went to buy a car battery at Western Auto, he had to have credit to pay the $12.95. She was the credit manager, and sparks flew. She made him come in weekly to pay the $1.25. They were married 64 years, and they had two children. He lived in Little

Rock for several years and in 1950 helped start Capitol Glass Co. He was part owner until he bought it in 1977, he said. Jack’s son, Glenn, now owns the company.

Matchmaker Donna Treece of Guy had other ideas. She attends Copperas Springs Baptist Church in Guy with Elsie and had previously attended church in Conway with Jack and his first wife. At a church homecoming, Treece ran into Jack, who was in mourning.

“The next morning, I know this sounds absolutely insane, but it’s like this small voice said to me, ‘Fix Jack and Elsie up.’ It broke my heart that they both were so sad after losing their spouses.”

Jack said he told Treece, “I’ve never been on a blind date in my life.”

He asked Treece to tell him about Elsie, though.

Treece and her husband, Barney, picked up Jack and then picked up Elsie. The couples went to dinner at a catfish restaurant in Heber Springs.

“They just clicked from the very beginning,” Donna Treece said.

And “good-looking,” she said. “He has beautiful hair.”

Right off the bat, “I liked her appearance,” Jack said.

After dinner on their blind date, Jack, then 91, offered to drive Elsie home.

Elsie agreed, but she said she made it clear she was only interested in friendship.

Although Jack also didn’t want to get married, he quickly changed his mind.

“If you’re sitting there three years by yourself, it’s pretty lonesome,” he said.

On their first date alone, the couple went to a Baptist church service together, and after a few weeks, Jack tried to propose.

He figured out the way to her heart was through Hawaii.

“I love Hawaii; I go every year. I’d live there if I could,” Elsie said.

Hawaii. Would you go with me on our honeymoon?’” she recalled, laughing.

They married Sept. 23, 2017, at Jack’s home in Mayflower, in a ceremony that was supposed to be just the couple and a preacher. His grandchildren found out and insisted they wanted to come. Jack’s best man was grandson Matt Goswick of California, and Elsie’s matron of honor was Jennifer Alexander, Goswick’s sister, who lives in Kentucky.

The newlyweds moved into Elsie’s home in Guy. The photo album from their wedding day is displayed on a coffee table. A gift from one of his granddaughters, a large wooden sign engraved with “Jack & Elsie,” is propped against the fireplace.

In April, the couple plan to go to Hawaii, where Jack was stationed for 14 months when he was in the Navy.

After high school, Jack went to California — where another brother lived and worked on a ranch owned by Fred MacMurray, the actor who played the father in My Three Sons. Jack lived with his brother and also worked on the ranch.

He said MacMurray came and stayed for about 30 days when Jack was there. He said the actor was nice and worked “just like the rest of us.”

One of eight children, Jack wanted to join the Navy like an older brother had. Jack joined at 17, with his mother’s permission.

He was on the aircraft carrier USS Liscome Bay, which just had been commissioned, when it was torpedoed by the Japanese in November 1943.

“We were launching planes because we knew the [Japanese] submarine was in the area; they didn’t get them all off,” he said.

When the torpedo hit, Jack said, he jumped off the ship.

“They said to abandon ship. I remember hitting the water and getting as far away from it as you could,” he said. Jack said his boot-camp commander told them if their ship was ever torpedoed, they should get as far away from it as possible. “The suction is going to take you under, and that’s what happened to a lot of them.”

He said the ship sank in about 20 minutes. It carried 54 officers and 648 enlisted men.

“I was scared so bad. I didn’t know what was going on. If anyone says they aren’t scared in a situation like that, I’ll call them a liar,” he said.

Asked if he was afraid to die, he said, “I thought I was already dead.”

The oil in the water caught fire, and Jack said his lower right leg was “burned pretty good.” He stayed in the base hospital for seven days.

Jack was one of 272 men who jumped overboard; 644 men died, according to the National Aviation Museum.

He doesn’t dwell on the tragedy. “I put it out of my mind,” he said.

The USS Battleship Mississippi picked up the survivors, and he was sent back to Pearl Harbor.

“I stayed there 14 months before I got sent back to the States,” he said. He was aboard the USS Missouri from October 1948 until he was discharged in December 1949.

Elsie’s first husband was in the Marines before she married him, and she displays a flag that is from his funeral.

She also pulled from a hall closet a quilt that her daughter made for Elsie and Harvey’s 50th wedding anniversary.

Elsie and Jack keep the memories of their former spouses alive; it’s a big part of who they are.

They are happy to have found each other, even in the sunset of their lives. And Treece is happy she introduced them.

“I am thrilled for Jack and Elsie,” she said. “When I call them, all I hear is this laughing and giggling in the background like two teenagers.”

Marriage goes by fast at any age, Elsie said.

When they stood from their chairs, Elsie hugged Jack around the waist.