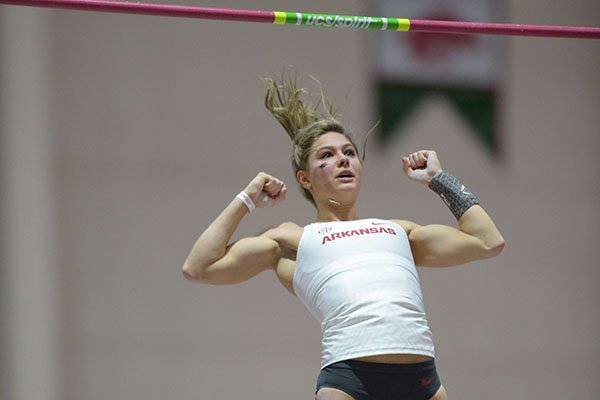 Arkansas' Lexi Jacobus competes in the pole vault invitational Saturday, Feb. 10, 2018, during the Tyson Invitational in the Randal Tyson Track Center in Fayetteville.

FAYETTEVILLE -- There was an Olympic flavor to the women's pole vault Saturday at the Tyson Invitational.

Newman, who competed at the University of Miami before turning pro, won and set a Canadian record by clearing 15 feet, 3½ inches.

Newman said the opportunity to compete against Jacobus and Hoggard, former Cabot High School standouts, was a plus.

"That's why I came down here, because I know they are so good and so consistent," Newman said. "It's good to get somebody that competitive to jump with."

Jacobus competed against Newman in college.

"It was kind of a little rivalry between the two of us, so it was nice to jump against her again," Jacobus said. "It was great competition."

If Jacobus had cleared 15-3½, she would have regained the NCAA lead from Kentucky junior Olivia Gruver, who is No. 1 this indoor season at 15-3. Jacobus is second at 15-2½, which she cleared at Texas Tech last week.

"I took some attempts at the collegiate lead, and unfortunately I wasn't able to put it together today," Jacobus said. "But I feel like I had a solid meet."

"On the longer poles, the bend is higher," Jacobus said. "So trying to adjust to that and the timing is something I'm going to have to get used to."

Hoggard used the 14-7 poles in competition for the second time after clearing 14-10½ last week.

"I've had a pretty good transition to these poles," Hoggard said. "But I'm still trying to get the feel of them."

In other women's events for the No. 1-ranked University of Arkansas, Fayetteville, junior Payton Stumbaugh Chadwick, from Springdale Har-Ber, took second in the 200 meters in 23.15 seconds behind LSU junior Kortnei Johnson, who won in 23.14.

Chadwick, a junior indoors because she redshirted last year, has the fourth-fastest 200 time nationally. Jada Baylark, a sophomore from Little Rock Parkview, took sixth in the 200 in 23.36.

In men's competition, junior Jah-Nhai Perinchief cleared 6-11½ in the high jump for the No. 6-ranked Razorbacks to take third. Arkansas senior Kenzo Cotton took fourth in the 200 in 20.79, and junior Roy Ejiakuekwu was fifth in 20.89.

Arkansas women's team assistant Bryan Compton, who coaches the vaulters, said Jacobus and Hoggard likely are a little tired. Jacobus competed for the fourth consecutive week after sitting out the opener while recovering from a hamstring injury, and it was the fifth consecutive meet for Hoggard.

"Actually I felt pretty good today," she said. "My warmups went really well. These are the best warmups I've had.

"It just didn't come together when the bar went up there. To be honest, I'm a little disappointed. I was hoping to go higher. I was really hoping to clear 15 feet after going 14-10 last week."

Jacobus and Hoggard will get a break from competition next week before the SEC Championships in College Station, Texas, on Feb. 24-25.

"I am looking forward to taking these two weeks to train and improve," Hoggard said. "It's kind of hard during the season to get good workouts in because you're looking to the meet."

Along with Newman, 10 of the top 16 collegiate vaulters were in the Tyson Invitational field.

"We had a lot of really good jumpers here today," Hoggard said. "That definitely gave an energy that we hadn't had in the other meets."

Compton gave Jacobus and Hoggard the option of taking last week off, but they decided to compete at Texas Tech.

"I was kind of debating whether or not I wanted to go, but Lexi wanted to go," Hoggard said. "I'm like, 'Well, I'm not going to get left at home.' "