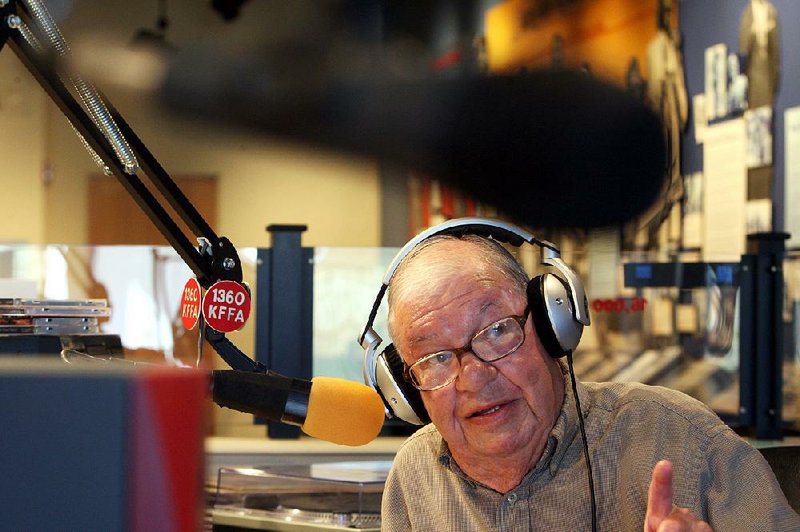 "Sonny was one of the most professional and warm people I have ever met in my life," said Thomas Jacques, assistant director of the Delta Cultural Center in downtown Helena, where Payne's studio was relocated to in the early '90s. "He could be highly opinionated and stubborn, but he was one of a kind and beloved."

Payne had been off the air since Dec. 27 when he fell at his home. Substitute hosts, including Jacques, filled in for him.

"In the back of our minds, we knew he was 92 years old, but we were hoping this would be one of those times when he would be back behind the mic again," said Katie Harrington, KFFA 1360 station manager. "It's a real loss for us."

Born Nov. 29, 1925, in Helena to Gladys Swope Payne and William G. Payne, he became infatuated with radio in his teens, when he would go to his older sister's house on Saturday mornings to listen to the Swift Jewel Cowboys on WREC in Memphis.

Helena radio station KFFA went on the air in 1941, and Payne talked his way into a job sweeping floors and running errands. In the evening, he took lessons from the station's chief engineer on how to read and speak on the air.

One day, station owner and King Biscuit Time host Sam Anderson had to run out and wouldn't be back in time for the show, which featured bluesmen Sonny Boy Williamson, Robert Lockwood Jr., and others performing live in the studio and was sponsored by Interstate Grocery and King Biscuit Flour.

It was Payne's first time hosting the program, and it would not be his last.

He continued working at KFFA but, tired of his $12.50 weekly salary, he lied about his age and joined the Army, serving in the 75th Signal Battalion. He was stationed in the Aleutian Islands in New Guinea.

He had learned to play bass, and after his discharge from the service in 1948, he performed with jazz groups and big bands.

By 1951, he was back home in Helena and working at KFFA, selling ads and hosting King Biscuit Time. He retired from sales several years ago, but continued on the show, opening each broadcast with "Pass the biscuits! It's King Biscuit Time" and playing classic blues mixed with newer tracks.

The show, which started as a 15-minute program then expanded to a half hour, aired each weekday from 12:15 p.m.-12:45 p.m. and became one of the longest-running in American radio history, with more than 17,600 broadcasts.

It was one of the first programs to feature blues musicians and was a springboard for harmonica player and singer Williamson, guitarist Lockwood, pianist Pinetop Perkins and many others. Muddy Waters and B.B. King both spoke of listening to the show, and Robert Plant of Led Zeppelin and singer Elvis Costello paid visits to the Delta Cultural Center to see Payne broadcast the program.

Fans traveled from around the world to see Payne, who often put them on the air with him.

The show was also the impetus for Helena's annual King Biscuit Blues Festival, where Payne would help emcee from the stage and welcome guests to special editions of the program.

"On behalf of the Department of Arkansas Heritage and the Delta Cultural Center, I want to extend our condolences to the family and friends of Sonny Payne," department director Stacy Hurst said in a statement Saturday. "The word 'legendary' doesn't begin to describe him or his influence in the world of Delta Blues music. His Delta Cultural Center family will miss him beyond measure."

Bubba Sullivan, owner of Bubba's Blues Corner in Helena-West Helena, grew up listening to the program and worked often with Payne during the King Biscuit Blues Festival.

"Can you imagine what it would be like up in heaven with Sonny, Robert Lockwood, Pinetop Perkins? Man, what a conversation," Sullivan said.

"It will continue, but it will never be the same," she said.