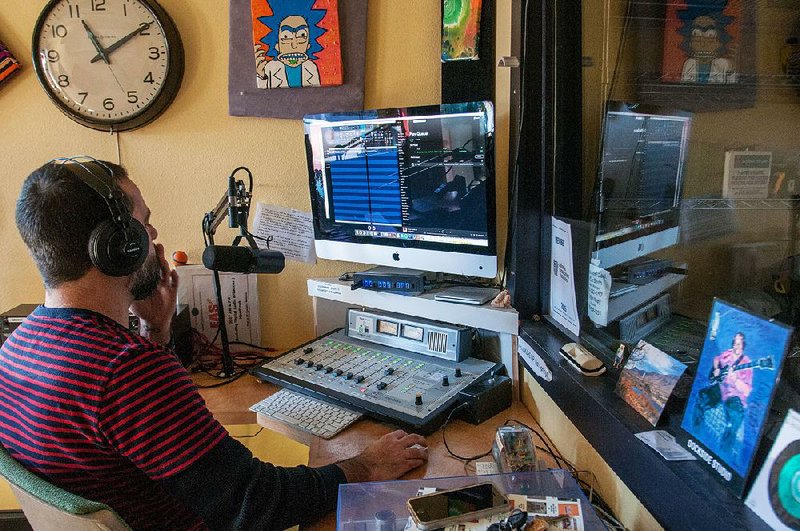 I can't live without my radio

HOT SPRINGS -- There are about 70 programs on Hot Springs radio station KUHS-FM, 97.9.

Staffed entirely by volunteers, the little 100-watt, nonprofit station's airwaves pump out everything from funk to jazz, Brazilian pop to Korean pop, reggae to blues and talk shows about video games and happenings at the Garland County Library.

It is Hot Springs-centric, eclectic and quirky.

It's also about to move.

Don't freak out, independent radio lover. KUHS, which went on the air in August 2015, will remain in its cozy studio at 240 Ouachita Ave., and listeners around the world can still stream it at kuhsradio.org.

Radio is a sound salvation

KUHS' existence can be traced to 1999 in Winston Salem, N.C. The Telecommunications Act of 1996 had deregulated converging broadcasting and telecommunications markets, paving the way in part for corporations like Clear Channel to own unlimited numbers of stations.

In 2000, the Federal Communications Commission designated a new class of radio station called Low Power FMs, noncommercial spots that operate at 1-10 or 50-100 watts.

"I was in Winston-Salem and saw all this go down," says KUHS founder and manager Zac Smith, 45. "I was underemployed and hanging out in coffee shops. We were daytime philosophers and I thought it would be neat to have an outlet, to have this low-power station where we were all sitting around, conversing and thinking about our community."

Smith's radio Utopia would have to wait awhile, however. First, he had to meet his wife, Cheryl Roorda, in Seattle, where they both played in a fire circus called Cirque de Flambe -- he was on tuba, she played accordion. The two married in 2001 and set out to see America in an RV, making money by busking on street corners.

"We ran off and lived on the road for about a year-and-a-half," says Roorda, 44.

When she became pregnant with their daughter, Eureka, they moved back to Seattle, but times were tight.

"We were living in this place we really couldn't afford and it was miserable," Smith says.

During their travels, the two came through Hot Springs and couldn't stop thinking about the town.

They had a phone book from the city and made a few calls, one of which was to a midwife who, like Cheryl, also played accordion. Feeling kismet in the air, Roorda and Smith packed up and moved here, playing polka as The Itinerant Locals at the former Brau Haus restaurant and gigging around the area (they once even toured by boat down the Ouachita River).

After years of traveling, they finally found a place to settle and raise their family (Eureka is now 14. Their son, Zephyr, is 12).

It's a bitterly cold mid-January morning as Smith and Roorda speak in the bright, warm dining area of SQZBX, the pizza parlor and brewery they opened about a month earlier. The restaurant, which is lovingly outfitted with old piano parts and has accordions on one wall, was once the home of Davis Piano Shop (the store's old sign hangs behind the counter). On the other side of the building is the KUHS studio.

Smith is a bundle of energy as he sits at one of the copper-topped booths, while Roorda oversees staff opening SQZBX for the day.

They befriended Joe Davis, owner of Davis Piano Shop, not long after they moved to town. After learning he was selling his store in 2007, they jumped at the chance to buy it.

They managed to get financing and the couple found themselves with an old building that needed a lot of work.

"We were street corner musicians," says Smith, with a laugh, still incredulous at their naivete. "This was all new to us. We were like, 'What have we done?'"

After a few years of trying to renovate the building, Smith rekindled his old passion for a low-watt FM station and coupled that vision with opening his own restaurant and brewery.

"I was finally in that place," he says. "It all clicked and we put together a plan."

For Smith, the restaurant would be his livelihood and the radio station would be his outlet to serve the community.

"I wanted both halves," he says. "SQZBX is where, hopefully, I'll be making money and the radio station was my dream."

Gonna ride by the Stop-n-Shop with the radio on

Smith's friend, Bob Nagy, who retired to Hot Springs from the biological sciences department at the University of Texas, Austin, was an old-school radio engineer who had helped put several other stations on the air in Texas. He was also an advocate of solar power, and built KUHS as Arkansas' only solar-powered radio station.

"It's a financial thing," the 62-year-old Nagy says, stressing the importance of keeping costs low. "For independents, the two things that will kill you is that your board gets taken over and your overhead is too high."

In early 2013, Smith and Nagy approached the board of Low Key Arts, a Hot Springs-based nonprofit arts group, about owning the license for the station.

Fundraising efforts pulled in about $35,000, which helped buy equipment, while volunteers built the studio. Eighteen months after getting approval for its low-wattage license from the FCC, KUHS went live.

Sonny Kay, the new executive director of Low Key Arts, where Roorda is currently board president, thinks the station and Low Key are excellent companions.

"I feel like this town is small enough so that all these arts organizations, and I consider the station one of those, can work together instead of competing for people's attention," Kay says before taking to the airwaves for his dub reggae show The Bassics, which airs from 11 a.m. to noon each Wednesday; he hosts another show, Finally Friday, from 8-10 p.m. Fridays. "And there is a lot to be said for radio breaking new artists, especially in a place like this, which is a little bit isolated, even with the internet."

Cruisin' and playin' the radio with no particular place to go

Each Sunday from 8 to 10 p.m., Karl Haire settles in at KUHS for an episode of Dad's House, and plays the classic soul and R&B that he would listen to with his father, Eddie.

"My dad always spoke with music," Haire says. "If there was emotional stuff, he would play the music that would fit the situation, or that said the things he couldn't say. It's a tribute show for him."

Before Eddie passed away in October, Karl would collaborate with him on the show's weekly playlist and after each show, his father would send a message saying "1-4-3 [Code for 'I love you']. Great show. Drive safe."

It's the kind of deeply personal, noncommercial show that would never make it on a mainstream station, but is right at home at a place like KUHS.

"If you have an opportunity to do community radio, do it," Haire says. "It's an expression. It gives you an opportunity to share your thoughts and feelings with people out there, and you never know who you might connect with."

Like Little Rock's long-running, beloved, 100,000-watt "Voice of the People" community service station, KABF-FM, 89.9, KUHS runs on underwriters and donations. One frequent donor is Richard "Disceaux" Sheeren who, like Nagy, is a Hot Springs retiree.

"I like what they're doing," says Sheeren, who counts a pair of Saturday afternoon shows -- The Big Star Power Hour and Keep on Truckin' among his favorites. "I like community radio and solar power, and the diversity, though diversity can be good and bad as far as listening, but rather than complain, you can just turn the dial."

He strolls by the studio on his frequent walks and each month makes a donation to help keep the station afloat.

In an email, he adds that "Supporting folks like Zac and Cheryl and [former Low Key Arts executive director] Bill Solleder is easy to do because they're so damn nice. It's been fun being an uplifter and cheerleader to these younger adults."

KUHS' signal covers about, oh, five miles or so. It's only 100 watts, remember. Not within the station's range? No worries, all shows are streamed at kuhsradio.org.

For Nagy, the station's low power makes it even more important to have a good spot on the dial, and 102.5 seems ideal.

A party will be held at 6 p.m. March 4 at the Central Theater, 1008 Central Ave., in Hot Springs to celebrate the move.

Among all of this, the important thing for Smith is using KUHS to broadcast Hot Springs into the world.

"People are always sending me stuff, saying 'We syndicate and produce this. Can you play it on your station,'" he says. "I don't want to relay stuff from the outside world back out, I want to generate stuff within our little circle. We have our little 100 watt circle the FCC gave us, and from here we're going out."

For KUHS' future, he and Nagy are hoping to create a relationship with emergency service personnel and to be active in getting information out during tornadoes or other disasters.

"Another big goal would be to tell more stories of Hot Springs, both news and features," Smith says. "I would like to see a more concentrated effort to go out and tell stories specific to our broadcast area." 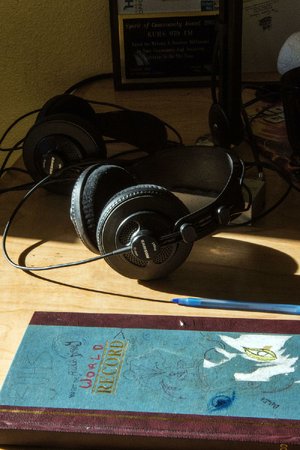 Photo by Cary Jenkins
Photo showing a pair of headphones 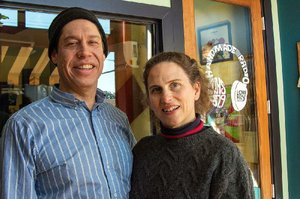 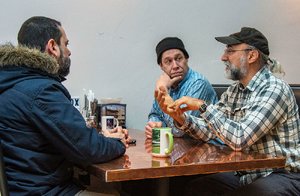 Photo by Cary Jenkins
Sonny Kay (clockwise from left), Zac Smith and engineer Bob Nagy hang out at SQZBX, the restaurant owned by Smith that is nextdoor to the KUHS studio in Hot Springs. 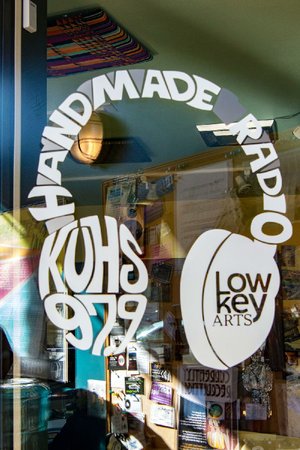 Photo by Cary Jenkins
The station is a part of Low Key Arts, the Hot Springs nonprofit that curates festivals like Valley of the Vapors and Hot Water Hills.